UK/EU Politics: Open Europe Report on Alternatives to Brexit (and some useful statistics and background)

UK/EU Politics: Open Europe Report on Alternatives to Brexit (and some useful statistics and background)

Following on from my summation of Philip Hammond’s talk on Europe last week (2 March 2016) at Chatham House, below is a blog post from Open Europe; a think tank that promotes ideas for economic and political reform of the EU.

The article lists the strengths and weaknesses of the existing alternatives available to the UK in the event of a vote to leave the EU in the referendum proposed for 23rd June 2016.

The article, like Mr Hammond, focuses on 3 main options:

The Norway/European Economic Area argument.  Norway enjoys full access to the European internal market as part of the EEA, which was established in 1994.  The EEA provides, like the  EU, for the free movement of persons, goods, services and capital.  As a signed up member to the EEA, Norway (along with Iceland and Liechtenstein) are obliged to implement all the EU’s laws in relation to the internal market.  They can’t, however, play a role in the decisions of any of the EU’s institutions, except in the Schengen Agreement, of which it became a signatory in 2001.  Norway also have to pay a large share to the EU in order to obtain free access to the common market and while it pays in, as a non EU member state, it does not receive any funding from EU.  Some figures for the Norwegian financial contributions can be accessed on the following link:

‘EFTA was founded by the Stockholm Convention in 1960. The immediate aim of the Association was to provide a framework for the liberalisation of trade in goods amongst its Member States. At the same time, EFTA was established as an economic counterbalance to the more politically driven European Economic Community (EEC). Relations with the EEC, later the European Community (EC) and the European Union (EU), have been at the core of EFTA activities from the beginning. In the 1970s, the EFTA States concluded free trade agreements with the EC; in 1994 the EEA Agreement entered into force. Since the beginning of the 1990s, EFTA has actively pursued trade relations with third countries in and beyond Europe. The first partners were the Central and Eastern European countries, followed by the countries in the Mediterranean area. In recent years, EFTA’s network of free trade agreements has reached across the Atlantic as well as into Asia.  EFTA was founded by the following seven countries: Austria, Denmark, Norway, Portugal, Sweden, Switzerland and the United Kingdom. Finland joined in 1961, Iceland in 1970 and Liechtenstein in 1991. In 1973, the United Kingdom and Denmark left EFTA to join the EC. They were followed by Portugal in 1986 and by Austria, Finland and Sweden in 1995. Today the EFTA Member States are Iceland, Liechtenstein, Norway and Switzerland’.  http://www.efta.int/about-efta/european-free-trade-association

Switzerland, whilst remaining part of EFTA, did not sign up in 1994 to the EEA; instead, it operates on a series of around 120 bilateral trade agreements with the EU; all of which took some ten years to negotiate.  The Swiss pay into the EU budget in order to have access to the common market, although they pay less than Norway.  The agreements are very good in relation to market access but less so in  terms of the services sector; particularly financial services.  Switzerland has to mirror EU legislation where it wants access to the single market although they do, unlike members of EEA, have their own say in terms of social and employment law matters.

The bilateral agreement with Canada has also been posited as a consideration: this agreement has taken some 7 years to negotiate and has yet to be passed by Parliament.  It is like Switzerland in that whilst it gains some common market access, there are restrictions vis a vis access to services, particularly in the financial sector.  Under the Canadian agreement (CETA), to access the financial services sector, Canadian firms would have to establish a presence in the EU and thereby, one would assume, adhere to EU regulations in this regard also.

World Trade Organisation (WTO, formerly known as GATT).  This scores the lowest for the UK in terms of continued market access to the EU.  Some goods would face high tariffs and accessing services would be difficult.  New trade agreements would have to entered into and these could take some time.

Nothing comes for free inside or outside the EU

The following is a link to the recent government publication mentioned in Philip Hammond’s speech:-

Herewith a graph that shows what the EU spent (expenditures) and what it received (revenue) in 2014. 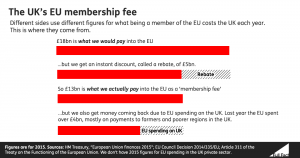