After a high profile selection process, Christine Lagarde, a French lawyer, politician and economist, is preparing to step down as Managing Director of the International Monetary Fund (IMF) to take the post of President of the European Central Bank (ECB). Over at the World Bank, David Malpass, an American economic analyst and government official, has recently been appointed as President. Since the Bretton Woods conference in 1944 only Europeans have ever run the IMF and Americans the World Bank. So why is this?

What is the Bretton Woods Agreement?

In July 1944, 730 delegates from 44 countries met at the Mount Washington hotel in Bretton Woods, New Hampshire, USA to establish a new international monetary system for the post-war period.

‘The second world war was not yet won. Yet already the western powers — the US, above all — were thinking about how to organise things differently for the better world that had to lie ahead.’ (Financial Times, 10.07.19)

The principal goals of the conference were to:

The conference, previously known as the United Nations Monetary and Financial Conference, reached an agreement where ‘other currencies were pegged to the value of the U.S. dollar, which, in turn, was pegged to the price of gold.’ (Investopedia, 13.04.19)

The Bretton Woods system came to an end in the early 1970s, when President Nixon announced that the U.S. would no longer exchange gold for U.S. currency.

The Bretton Woods Agreement is a significant event in world financial history as it created two important institutions: the IMF and the World Bank, which were both formally introduced in December 1945. 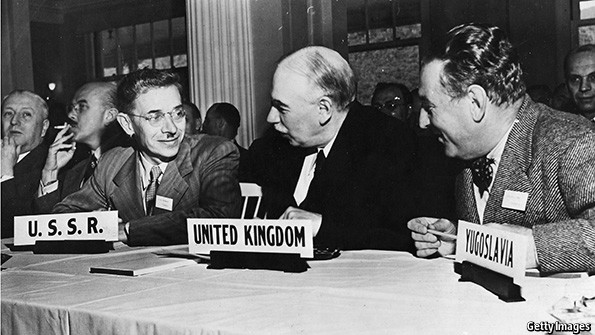 Why were the IMF and World Bank created?

IMF – to monitor exchange rates and lend reserve currency to nations that needed it to support their countries and pay debts.

World Bank – The World Bank Group, initially called the the International Bank for Reconstruction and Development, was established to provide assistance to countries that had been physically and financially devastated by World War II.

Both organisations have grown to include 189 member countries.

Traditionally, the IMF Managing Director has always been a European and the President of the World Bank has always been American. This is not a formal requirement and is certainly not mentioned in the IMF’s Articles of Agreement which simply states that the director is appointed by the executive board.

For most of the IMF’s history the United States and Western Europe have dominated the board. This is because the voting rules were set up so that countries with the highest ‘quotas’ — a measure of the size of their economy and economic viability — are given preference for membership.

The origins of the agreement date back to Bretton Woods.

‘According to Miles Kahler’s history, Leadership Selection in the Major Multilaterals, Bretton Woods architect John Maynard Keynes had assumed that his main collaborator at the conference, Treasury Department official Harry Dexter White, would run the IMF. U.S. President Harry Truman also supported White’s choice. However, Treasury Secretary Frederick Vinson, with strong backing from Wall Street, argued that an American should run the World Bank — Washington Post publisher Eugene Meyer got that job in 1946 — and that it wouldn’t be proper for the United States to run both of the world’s major financial institutions. White’s possible communist sympathies — he’s widely suspected today of having been a Soviet agent — may also have played a role in the decision. In the end, Belgium’s Camille Gutt was eventually appointed to run the IMF.’ (Foreign Policy, 18.05.11)

In 1946 there was no question that the only alternative to a non-American managing director was a European. The US still exercises control over the  selection process as well as the US Treasury appointing the deputy managing director – the result of another informal agreement. 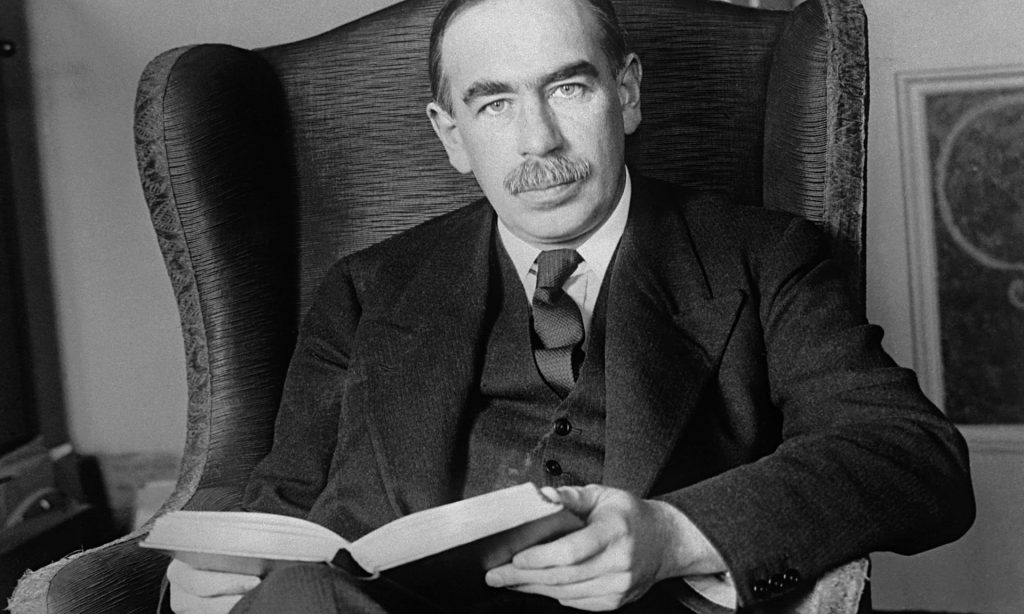 Will the ‘gentlemen’s agreement’ last – and should it?

The informal agreement has reached its seventy-fifth anniversary and reflects a bygone era. Nationality should not be the deciding factor in any job selection process and certainly wouldn’t be acceptable as criteria for a ‘normal’ job. Not only that, selecting Europeans specifically means choosing from a smaller pool of talent, while emerging economies playing increasingly vital roles in the global economy. In the same vein, the Asian Development Bank was founded in 1966 and modeled closely on the World Bank. The USA and Japan have been the major donors and as such it has only ever had Japanese leadership.

The emerging candidates for Lagarde’s old job are:

‘While all are qualified, each has issues. Carney is a Canadian citizen (although he also has an Irish passport), is serving in a country that will soon leave the European Union — raising questions about whether Europe would back him — and is thought to harbor political ambitions in Canada. Osborne faces the same questions about his ties to Europe; his record in office raises even more compelling issues. Neither Shanmugaratnam, Rajan nor Carstens is European. Georgieva has a formidable CV as an international finance civil servant, but she comes from Eastern Europe and it is not clear if Europe will rally behind her. International betting markets have Carney the favorite, followed closely by Rajan.’ (Japan Times, 07.07.19) 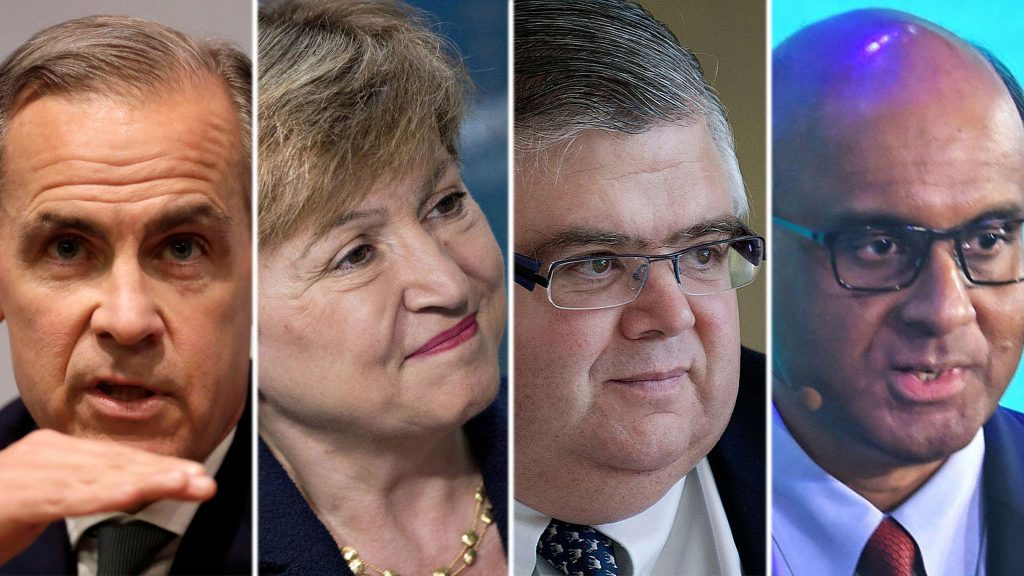 Will the Bretton Woods institutions survive?

‘It will soon be 75 years since the Bretton Woods conference. It was a rare moment in history when geopolitical rebalancing was combined with high idealism. “The United States and the United Kingdom had the greatest influence at the conference…but Bretton Woods was a genuinely multilateral negotiation. The other large and medium-size countries also shaped the conference,” Kurt Schuler and Andrew Rosenberg say in the introduction of their 2013 book on the Bretton Woods transcripts.’ (LiveMint 11.07.19)

The global economy is slowing, the nationalist and protectionist winds are blowing stronger. Donald Trump’s idea of ‘America First’ is in direct contrast to the spirit of international cooperation that thrived after the second world war.

The Financial Times makes the comparison using these quotes:

“We have come to recognise that the wisest and most effective way to protect our national interests is through international co-operation — that is to say, through united effort for the attainment of common goals.”

“We must protect our borders from the ravages of other countries making our products, stealing our companies and destroying our jobs. Protection will lead to great prosperity and strength.”

‘The Trump administration has shown disdain for international institutions in general and the emergence of new international financial institutions like the Asian Infrastructure Investment Bank will compound the difficulties of modernizing the IMF and adapting to a new global environment. Some fear the IMF will need to raise new capital from member states after recent loans to Argentina. It is a full plate that demands both economic and diplomatic skills.’

‘The institutions have adapted to past changes pretty well – the collapse of the fixed exchange rate system in the early 1970s, various debt crises – particularly in the 1980s. Some would argue they enforce ideologies like privatisation, cuts, free trade in poorer countries and are blind to concerns like inequality and the environment.’

Barbara Woods of the Bretton Woods Committee concluded in March 2019:

‘To survive and thrive for another 75 years, the Bretton Woods institutions must successfully address two new existential challenges: (i) geopolitical rebalancing and (ii) technology-powered decentralization.

Economic interdependence underpinned by the Bretton Woods system has served the globe well. It re-built war-torn economies, raised millions out of poverty so far, facilitated the integration of post-Soviet economies into the global system, provided a platform for peaceful discussion of global imbalances, and delivered financial support to countries in crisis. The system is not perfect, particularly with respect to crisis finance. However, the counterfactual (a world without the Bretton Woods institutions) illustrates the importance of not over-stating the negatives.

The Bretton Woods institutions – and their sovereign shareholders – must evolve to meet the needs of a globally connected but distributed economy. Enhanced consultation and transparency may provide part of the answer. Some informal international entities (the Financial Stability Board), as well as the IMF, are currently exploring ways to increase engagement with a more distributed stakeholder base. Mutual recognition agreements, reciprocal enforcement agreements, and/or minimum standards regarding regulations may support 21st century distributed and interdependent economy better than zero-sum-game tariff negotiations.

The Bretton Woods system must adapt if it is to survive and thrive over the next 75 years. The time to intensify and accelerate the evolution of the system is now.’

https://www.investopedia.com/terms/b/brettonwoodsagreement.asp
The race to be next IMF chief
https://www.lowyinstitute.org/the-interpreter/race-be-next-imf-chief
Why Is the IMF Chief Always a European?
https://foreignpolicy.com/2011/05/18/why-is-the-imf-chief-always-a-european/
Time to rethink the IMF leader’s selection process
https://www.japantimes.co.jp/opinion/2019/07/07/editorials/time-rethink-imf-leaders-selection-process/#.XSW0uYhKiM8
Bretton Woods at 75: the threats to global co-operation
https://www.ft.com/content/e82a1f48-a185-11e9-a282-2df48f366f7d
The Next 75 Years – Coping with Decentralization and Geopolitical Rebalancing
https://www.brettonwoods.org/article/the-next-75-years-coping-with-decentralization-and-geopolitical-rebalancing

Opinion | How India made its mark at the Bretton Woods Conference