Arts, Debate and Opinion: Why are identity specifics important to the LGBT+ community?

Home / Articles / Arts, Debate and Opinion: Why are identity specifics important to the LGBT+ community? 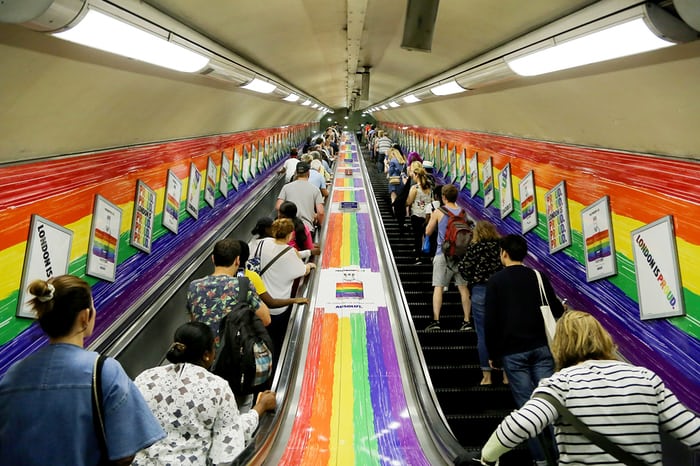 Arts, Debate and Opinion: Why are identity specifics important to the LGBT+ community?

‘We have known each other now for more than four years. Half of the time we have been together: the other half I have had to spend in prison as the result of our friendship.  Where you will receive this letter, if indeed it ever reaches you, I don’t know. Rome, Naples, Paris, Venice, some beautiful city on sea or river, I have no doubt, holds you… Life is quite lovely to you.  And yet, if you are wise, and wish to find Life much lovelier still and in a different manner you will let the reading of this terrible letter – for such I know it is – prove to you as important a crisis and turning-point of your life as the writing of it is to me ….  You came to me to learn the Pleasure of Life and the Pleasure of Art.  Perhaps I am chosen to teach you something much more wonderful, the meaning of Sorrow, and its beauty.  Your affectionate friend, Oscar Wilde’.

Oscar Wilde writing to his lover Bosie from HM prison, Reading, in 1896, where he was imprisoned for his homosexuality.

As we reflect on this wonderful weekend of Pride, we take the time to celebrate the international LGBT+ community.  Hoping to be part of this, and hoping to make you part of this too, I’m going to take some time to reflect on how this community has grown over the past few years and the rising number of gender, romantic and sexual identities.

I am a pansexual woman, although I introduce myself as bisexual if the person who asked is short on time or patience.  The range of people who any one individual may be attracted to is a nebulous thing, endlessly surprising and often very beautiful.  I’m lucky to be confident and comfortable in who I am, but there are a lot of people who scoff at the labels I apply to myself.  Aren’t bisexuals just promiscuous heterosexuals?  What does pansexual even mean?  Why do you need all of these labels anyway, can’t you just cover it all by saying that you are gay?

While these comments do sometimes hurt my feelings, I am normally only disappointed that people have not been educated on the answers to these questions.  However, I do understand why people may be a little confused on this, and therefore I am going to make some effort to resolve my own distress in trying to explain to you why these labels are so important to me. Please be patient, and I’ll do my best to offer a brief explanation.

Before discussing attraction based on gender and sex, you necessarily need to clarify the terms “sex” and “gender”.  These terms not are not interchangeable.  “Sex” signifies the biological classification of the body into the binary categories of male and female.  This is normally set from birth, although in the modern day this can be changed through surgery and hormone treatments later in life.  Gender, on the other hand, signifies the classification that an individual may assign themselves, which is normally either “man” or “woman” congruent with their sex.  However, many people feel that their gender does not align with their sex.  A person may be biologically female but identify as a man and vice versa, sex not necessarily being a defining factor in dictating an individual’s gender.

An example of non-binary individual is Richard O’Brien, who has taken estrogen for many years due to feeling that he is “70% a man” and has said that he is “very happy with the results”.[2]

Gender is a very complicated field to traverse and sexuality even more so.  What must be remembered is that gender is NOT limited to the binary categories of “man” and “woman”: there are many points in between and many people who are not on the spectrum at all.

The Actuality of Sexuality

The term “bisexual” is a fairly common one nowadays, first coming into use in terms of its modern definition Charles Gilbers Chaddock’s book Psychopathia Sexualis over 130 years ago.  “Bisexuality” may be defined as the attraction to people of either of the binary genders, both men and women.  I can recount firsthand that bisexual individuals often get a lot of backlash and misunderstanding.  Common words used are “indecisive”, “greedy” and “confused”.  Many bisexual people are mistakenly labeled as homosexual or heterosexual depending on their current partner.  A good example of this is actress Anna Paquin who was labeled as a “non-practicing bisexual”[3] by Larry King after she married her husband, a redundant term since any sexuality is an identity; not a practice.  Evidently, as soon as we go past the terms “heterosexual” and “homosexual”, confusion is likely to ensue.

Pansexuality, a relatively new term in the LGBT+ world and may be described as an expansion of bisexuality.  While bisexuality entails people being attracted to people in either of the binary genders, pansexuality entails being attracted to people of any gender, thereby creating a space for non-binary individuals as well as people who identify as men or women.  A big problem with understanding pansexuality is that understanding people can exist outside of the binary genders, hence why I have outlined it at the opening of this article.

Taking the fact that gender is a spectrum into account, we may understand how pansexuality differs slightly from bisexuality.  It covers a wider range of people than its more traditional term of bisexuality.  But with this rise in identification labels and the increase in closely defined spaces of individuality such as this, a new question arises: why do we need all of this terminology?  Can’t people just stick with a blanket term?  This is what I will now address.

More identities than ever

Once the world understood there to be two sexual identities: heterosexual and homosexual, the latter of which was often synonymous with “abnormal”.  Homosexuality covered all variations of same sex attraction as well as any deviance from birth-assigned gender.  Less than a century ago, within the living memory of many, homosexuality was regarded as something to be ashamed of, or worse, a criminal offence.  Despite the fact that homosexuals were targeted by Nazis and subjected to “correction” experiments, the group were not acknowledged as victims of Nazi persecution due to homosexuality being illegal in Germany since 1871.  As such, they were not entitled to any kind of compensation.

In England, homosexuality was not decriminalised in until 1967, only 50 years ago.  Even then the consent age was 21 and it was only to be practiced “in private”.  Whilst the act of sex was legalised (in private), public displays of affection for a same sex partner, something that is a basic entitlement for their heterosexual counterparts, remained legally and socially taboo for decades afterwards.  Millions have died and continue to die simply because of who they love.

The importance of recognition

For me, an important part of Pride is remembering and honouring those who came before us and fought for the right of LGBT+ people to bear their identity proudly.  This fight continues today throughout the world with some countries still considering certain expressions of sexuality as abnormal and even criminal.   In the past and in less tolerant countries today, the term “homosexuality” was and is enough of a blanket term that people were and are able to use it in order to justify abuse, violence and even death: the term in itself gave ‘permitted’ that behaviour.

The importance of acceptance

I am very, very lucky to live in a part of the world where we are more tolerant of people’s sexualities and individuals are allowed to flourish within the LGBT+ community.  During the early 20th century, terms such as “butch” and “femme” emerged for lesbians which created subsets within homosexuality. “Bisexuality” came into use as people no longer needed to devote themselves to the opposite sex and ignore their same-sex preferences in avoidance of persecution.  Nowadays, there is even a term for the marriage of a gay man to a woman: it is known as a  ‘lavender marriage’, something that is often done on the quiet for those who occupy positions of power, are politicians or have high profile personalities in the entertainment world.

As tolerance for non-heterosexual identities grew over time, so too did the number of identity subsets: bisexual, pansexual, asexual and demisexual are just some of the many terms that have developed over time; alongside more romantic subsets and various other gender terminologies.  These terms represent a society of individuals who are being allowed to explore what they feel for others and themselves and term or label themselves accordingly, if they so desire. We as humans are always keen to categorise for every anomaly and novelty, giving it its own named and labeled space.  Grey areas of non-existence are feared, especially in the modern age of technology where social media requires everyone to craft a detailed public identity.  Understanding this, the creation of new sexual, romantic and gender subsets are created to prevent anyone feeling “outside the norm” and such labels provide them with micro-communities in which to identify themselves and feel at home.  Even if they create a label for themselves alone, they are still categorised: an improvement on existing in a grey area.

The LGBT+ community is rich with variety, its many sub-categories signifying the freedom for people to express themselves that the group has worked towards for the last century.

The point of it all

While for many it may seem confusing and perhaps unnecessary to have such a huge variation of personal identities within the LGBT+ community, it represents the beginnings of universal tolerance within the western world.  To many, especially those who have lived long enough to remember when “homosexuality” as a blanket term was to persecute anyone outside of the established norm, this tolerance is invaluable.

Therefore, when I tell you that I am a pansexual woman, I hope that after reading this you will understand and appreciate the value of the fact that, even while there is still much to be done to improve global LGBT+ rights, I and millions of others across the globe are allowed their own defined space within the endlessly confusing, undefinable and wonderful global community.

[1] It is important to note that being a drag queen does NOT necessarily make someone transgender or non-binary. Gender performativity does not dictate gender identity in this case.