The Balkans: Serbia has a new Prime Minister

Home / Articles / The Balkans: Serbia has a new Prime Minister 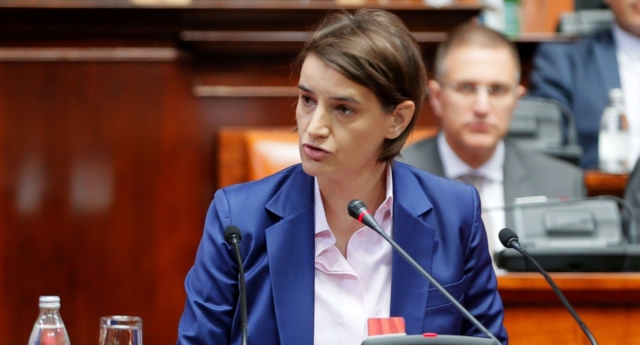 The Balkans: Serbia has a new Prime Minister

‘I’m not a spokesperson for the L.G.B.T. community.  I don’t want to be branded as a gay minister, just as my colleagues don’t want to be primarily defined as being straight.  All I want is to do my job as best as I can’.

So she’s gay.  So what?  Surely it should only matter that she is competent to do the job?  I read about Serbia’s new Prime Minister in the FT last week.  That’s her in the picture above.  The FT’s Andrew Byrne says that her appointment has raised eyebrows for two reasons:

The President is Aleksandar Vucic.  He used to be Prime Minister until he was elected President in a ‘landslide vote’ in April 2017, having only put himself forward for the role in February.  Vucic is the one who nominated Brnabic as Prime Minister.

Serbia: a bit of history for you

The Kingdom of the Serbs, Croats and Slovenes came into being after the First World War.  It was later invaded in 1941 by the enemy, (as we like to call them), i.e. the Axis powers.  Later on during the Cold War, Serbia was very much at the centre of the Socialist Federal Republic of Yugoslavia.  It was a non-aligned country comprising most of the nations in the Western Balkans and was ruled by General Josip Broz Tito a regime of communist dictatorship.  When I say ‘non-aligned’, what I mean is that it did not align itself with the Soviet Union or China, as most other communist countries did.

Yugoslavia collapsed in the early 1990s along with the fall of communism.  Under Tito, ethnic divisions never really came to the fore as he largely held it all together.  However, after his death in 1980 and the subsequent fall of communism, Yugoslavia (as it was then known), fell apart.

In 1989, Slobodan Milosevic became President.  I don’t need to give him much of an introduction.  Under his rule, ethnic violence spread across the region and put a massive a strain on Serbia’s relations with Europe and the United States.  Milosevic was later charged by the Hague with genocide and war crimes.  He died in his prison cell in 2006 before being found guilty of said crimes as the proceedings were still in motion.  Sadly many of the relatives of those who had died or gone missing were left without closure as a result of this.

In 2012, Serbia was declared a candidate for EU accession.

Serbia is mainly a country of Orthodox Christians who are not known for their acceptance of gays in general.  It’s capital, Belgrade, only recently had its first gay pride march in 3 years.  According to the BBC, they had to be cancelled because people who took part were frequently attacked.   Balkan Insight says that in one way, Brnabic’s appointment shows the extent of Vucic’s power: it is highly unlikely that she would ever have been able to gain power due to excessive homophobia that exists in Serbia.

Serbia isn’t all that close to Russia geographically: you’d have to go through Romania, Moldova and Ukraine to get there, unless you chose to cut across Bulgaria to the east and jump into a boat in the Black Sea.  Serbia is a close Russian ally but is also interested in forging ties with the west and joining the EU.  Serbia is heavily dependent on Russian natural gas and Russia is Serbia’s third largest source of imports and fourth largest destination for exports (Stratfor, 11.4.16). 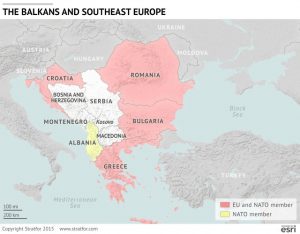 On a more sensitive note, Moscow does not recognize Kosovo’s independence and is a main supporter in Belgrade’s claims to the breakaway territory.  You can read more about this in the Stratfor article cited below.

The crisis in Ukraine has put Serbia in an awkward position.  Belgrade continues its accession talks with Europe but refuses to introduce sanctions against Russia and according to the Russian news site Sputnik, they don’t intend to start sanctions any time soon either: Serbia wants to keep alliances going on both sides.  Russia is said not to be concerned about Serbia’s wish to become part of Europe: Putin would be more concerned if they had plans to join NATO but so far, that is not on the agenda.  According to the New York Times, President Vucic called NATO (who bombed Serbia in 1999 to drive out its army from the mainly Albanian province of Kosovo), an ‘evil’ alliance (NYT, 28.6.17).

Slovenia and Croatia, countries that were also part of the former Yugoslavia, both joined Europe in 2004 and 2013 respectively.

According to Bloomberg, she was educated in the US and the UK.  I got further information on this from a French news web site (cited in the sources below).  She studied an MA in Marketing at Hull University (2000-2001) after her preceding studies in America at Northwood University in Michigan.  I couldn’t get any specifics on what she studied whilst there.  Brnabic is fluent in English and Russian as well as her native tongue.

She was born in September 1975 and is currently 41.  According to The Independent, she is a former ‘Businesswoman of the Year’ in Serbia (Independent, 15.6.17).

She worked in renewable energy for a while, in EU funded agricultural development programmes and US Aid funded projects.

A year ago, she was appointed a minister in the government, minister for ‘government administration’, apparently, a role in which she impressed many.

Although she is sponsored by the Serbian Progressive Party, Brnabic is not affiliated with any particular political party herself: no bad thing in my book.  Nor has she ever held elected office.  She will share some duties with Deputy Prime Minster Ivica Dacic.  He is pro-Russian and has been known in the past to be critical of EU accession and he’s not all that hot on LGBT rights apparently (FT, 29.6.17).  According to Balkan Insight:  ‘the official line is that Brnabic in her new role will be more concerned with Serbia’s economic policy, rather than politics, which will be left to Dacic’. 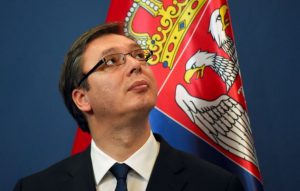 That’s him above, looking up into the air: Aleksander Vucic.  He won by a landslide in the presidential election on 2nd April 2017 and was sworn in as President on 31st May.  His Serbian Progressive Party has a majority in Parliament.

The role of the prime minister is supposedly more powerful than that of the president, according to the Constitution.  The President, who is the commander in chief and controls various intelligence services, nominates the Prime Minister but allegedly can’t interfere with the running of the government.  It has been noted that Mr Vucic would like to play a dominant role in politics and has in fact been accused of choosing someone who will be a malleable ‘puppet’ to be the Prime Minister.  When questioned about this he simply responded that Brnabic had her own brain.  Reuters have also alluded to this:

‘As president, head of the ruling SNS (Serbian Progressive Party), and de facto leader of the government, Vucic would extend his influence across the legislative, executive, and judiciary branches, resulting in an unprecedented concentration of power since Slobodan Milosevic’s rule in the 1990s.  Vucic, who as information minister in the late 1990s presided over legislation designed to muzzle dissent against Milosevic, has been accused of stifling media freedoms since becoming prime minister almost two years ago’ (Reuters, 28.6.17).

The above quote is published in Reuters and also the Irish Times.  It originated from the risk consultant group Teneo Intelligence.

Critics of the new Prime Minister say that she was put in this role to improve Serbia’s chances of gaining access to the EU.  He may also have considered that it would undoubtedly present himself in a more liberal light, thereby appeasing Europe and acting as a shield to hide his autocratic tendencies.

Vucic has close ties with Moscow and many of his cabinet ministers (now Brnabic’s cabinet ministers I suppose), include no small number of pro-Kremlin figures.  He likes to play both sides.  In saying that, his new Prime Minister may have other ideas.  On Friday, according to Bloomberg, she said the following from the government office in Belgrade:

‘The EU is where we’re going — that’s clear.  We do have emotional ties with Russia because of tradition, culture and religion.  There are many people in Serbia who completely perceive Russia as our big brother, our protector and those sentiments can’t be disregarded, but our strategic path is the EU’ (Bloomberg, 3.7.17).

Stratfor, 11.4.16, gives an excellent account of Serbia’s history. Whilst it is easy to understand, it goes into a great deal of useful detail:

This link gives a very good and simple timeline of the events in Serbia, including the time under Milosevic, and it has maps too.  It’s not something that’s easy to explain but I’ve tried to choose something short and accessible.  The timeline only goes up to 2011 but that’s sufficient as it covers all the complicated bits: