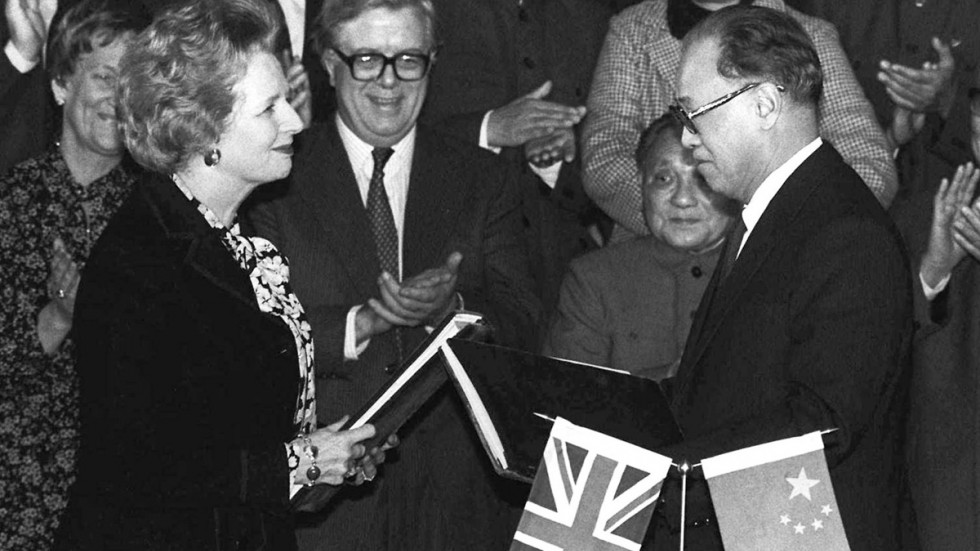 Last week, Chinese President Xi Jinping was visiting Hong Kong on the 20th anniversary of the handover of Hong Kong (a former British colony), to Chinese rule in 1997.  It was the first time that the Chinese President has visited since he became the Chinese President in 2013.  He was also in Hong Kong to inaugurate Carrie Lam as Hong Kong’s new Chief Executive.  According to the New York Times: ‘Lam delivered her speech in Mandarin, the national language of China, but she spoke briefly in Cantonese, the mother tongue of most Hong Kong residents, to read the lyrics of a song about social cohesion’ (NYT, 1.7.17).

The Telegraph said: ‘Lam and her Cabinet swore to serve China and Hong Kong and to uphold the Basic Law, the territory’s mini-constitution’, (Telegraph, 1.7.17).

According to the New York Times back in March this year, Lam was considered the Chinese favourite to be elected as Hong Kong’s Chief Executive:

‘Ms Lam is loyal to the Chinese Communist Party but more skillful politically than Leung Chun-ying [her predecessor], the deeply unpopular incumbent Chief Executive, said Chan Kin-man, an associate professor of sociology at the Chinese University of Hong Kong who helped organize the 2014 protests.  Mr Leung was the city’s first Chief Executive to seek a second five year tenure’ (NYT, 23.3.17).

What is the ‘one country, two systems’ rule?

It is a form of semi-autonomous government in which Hong Kong is ruled by China in theory but has its own governance structure.  It was initially devised in the 1980s by the then Chinese leader Deng Xiaoping to allow Hong Kong to retain its separate system while transitioning over to Chinese rule at a later date.  It was set out in the 1984 Sino-British Joint Declaration and then again in Beijing’s White Paper in June 2014.  One of the stipulations under the Declaration and the White Paper is that it is China appoints the Hong Kong Chief Executive but that said Chief Executive is selected in elections in Hong Kong.  The Sino-British Joint Declaration was signed by then British prime minister Margaret Thatcher and Chinese Premier Zhao Ziyang (FT, 2.7.17).  You can see them in the image above.

This is how The Economist puts it:

‘The principle of one country, two systems was first proposed by Deng Xiaoping in the early 1980s as way to reconcile the communist mainland with historically Chinese territories—Taiwan, Hong Kong and Macau—that had capitalist economies.  In 1984 the concept was enshrined in the Sino-British Joint Declaration, in which the two countries agreed that Britain would hand over sovereignty to China.  It is also in Hong Kong’s mini-constitution, the Basic Law.  The Basic Law states that even though Hong Kong is an inalienable part of the People’s Republic, China’s parliament authorises it to exercise a high degree of autonomy to enjoy executive, legislative and independent judicial power.  China is responsible for defence and foreign affairs but Hong Kong runs its own internal security. The central government is banned from interfering in Hong Kong’s affairs, and the Communist Party has no official presence. Freedom of speech, press, religion and protest are all defended by law’.

Under the pact, China agreed to give the Hong Kong limited autonomy and its own judicial system for 50 years after the British left in 1997.

What did Deng Xiaoping actually say?

He said that Hong Kong should have ‘respect for the Chinese nation, sincere support for the motherland’s resumption of sovereignty over Hong Kong and a desire not to impair Hong Kong’s prosperity and stability’ (Chatham House article, 2014).

If you want a more academic description…

Damien Kingsbury, Professor of International Politics at Deakin University, Melbourne, puts it like this in his article ‘Autonomy in Hong Kong’:

‘Hong Kong’s one country, two systems is sometimes referred to as constituting Hong Kong’s autonomy from China.  this is, in principle, confirmed under Hong Kong’s 1997 Basic Law….

In the case of Hong Kong, the territory has an independent executive legislature and judiciary, although cedes authority in the areas of defence and foreign affairs.  Hong Kong is, however, able to develop direct links with foreign states and international organisations across a range of appropriate fields.  This implies that Hong Kong has relative political independence so long as it remains within the framework of China’s political preferences’.

Freedom of information and expression are still part of the Hong Kong way of life.  There is still a capitalist economy and the legal system continues to be based on British common law with an independent judiciary.  Hong Kong maintains it status as a leading global financial hub.  It continues to be one of the most open economies in Asia and last year ranked 15 out of 176 in Transparency International’s corruption perceptions index; not bad when you consider that China is ranked 79 for the same year.

According to Dr Summers writing for Chatham House earlier this month, ‘the centre of gravity of Hong Kong politics has continued to drift away from Beijing, not towards it’.

The Economist suggests that as China depends less and less on Hong Kong’s economy and more focused on its own, it may make the Chinese government adopt a more assertive stance.

Damien Kingsbury goes on to say:

‘… while favouring Hong Kong’s continued economic success, a more assertive Chinese government might be increasingly keen to ensure that Hong Kong stays even more firmly within the Chinese political sphere.  This was reflected in the selection of Hong Kong’s new Chief Executive, Carrie Lam, who was elected by less than 1,200 people from a voter base of 3.8 million and was China’s preferred candidate’.

You can read the rest of the article in the sources below.  It is not long and is quite interesting.  Also very easy reading considering it has been written by an academic!

Were there any protests on the Chinese president’s visit to Hong Kong?

A few.  Hong Kong police arrested 26 democracy activists on Wednesday last week, including the former Occupy movement leader Joshua Wong and legislator Nathan Law as they staged a protest at a statue given to Hong Kong by Beijing to mark the handover, according to the FT on Friday.

What is/was the Occupy Movement?

This refers to the 79 days of protest in the autumn of 2014, otherwise known as the ‘Umbrella’ movement.  The ‘one country, two systems’ rule that was given to Hong Kong in 1997 allowed for the following:

What are some of the other reasons behind the Occupy/Umbrella protests of 2014?

According to Dr Tim Summers writing for Chatham House on 29th June 2017, some of those reasons were as follows:

The Telegraph, 1.7.17, ‘Violent clashes erupt in Hong Kong as new leader Carrie Lam is sworn in’. This link gives a little 2 minute video of Hong Kong over the years, including the opium wars and when Hong Kong was a British colony:

More on Carrie Lam from the New York Times, 23.3.17.  It talks about the committee selection of Ms Lam:

The New York Times on President Xi’s speech in Hong Kong warning against excessive resistance to Beijing from Hong Kong:

China Policy Institute, Analysis, ‘Autonomy in Hong Kong – what ‘autonomy’ means in practice’,  Damien Kingsbury, Professor of International Politics, Deakin University, Melbourne.  As for the date, it just says ‘one month ago’:

A useful short guide to the political system of China, by a very good friend of mine:

David Tang writes for The Weekend FT on 30.6.17 on China and how it sees  the handover from Britain 20 years ago as a success:

Steve Tsang, director of the China Institute at the School of Oriental and African Studies, is cited in the FT’s article of 2.7.17.  It is a name worth looking into if the subject of China and Hong Kong is of interest to you.  You can access his profile and publications here:

He also happens to be a fellow at Chatham House:

He also wrote a very good book on the history of modern Hong Kong which I have not read personally for lack of time but which has come very highly recommended.

An old Foreign Policy article from 2014 on the  Sino-British Agreement of 1984:

Comment On China and Hong Kong: One Country, Two Systems

Freedom of Expression and Assembly in Hong Kong: The continuing 'repression of young democrats' is 'unwise and shameful' - Make Me AwareMake Me Aware Reply

[…] You can find more information about these protests here: http://www.makemeaware.com/china-hong-kong-one-country-two-systems/ […]