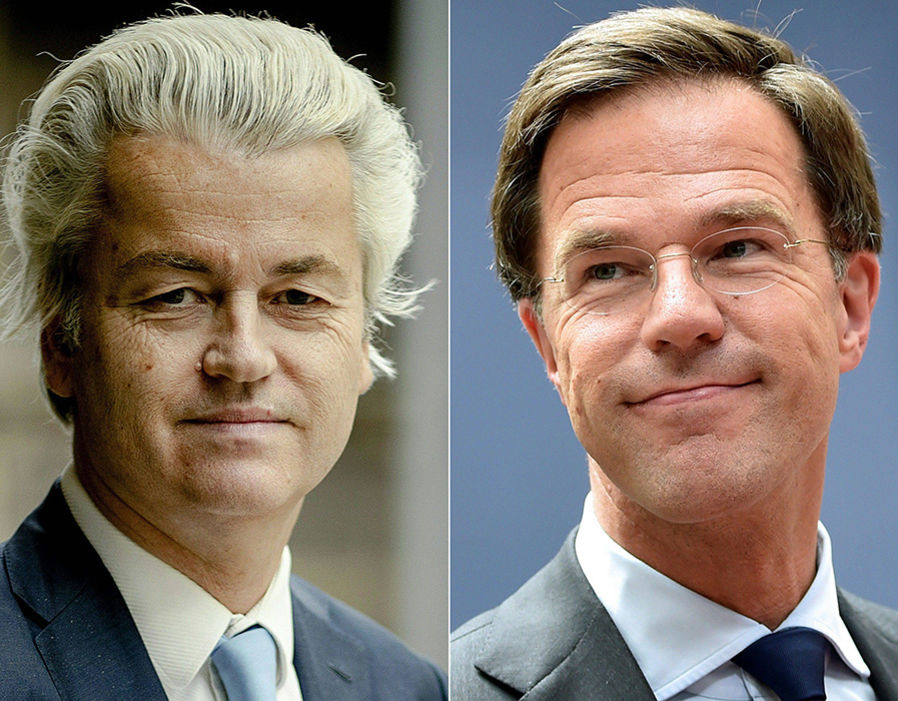 Wilders above left, Rutte above right.

‘It is the third elections after Brexit, after the American elections. We have the upcoming French and German elections. And this is a chance for a big democracy like the Netherlands to make a point – to stop this toppling over of the domino stones of the wrong sort of populism’.

And lastly, another quote by Mark Rutte; this time from Euro News earlier today:

The Election: what are the polls suggesting?

The Netherlands will today elect 150 members of a new Tweede Kamer, or lower house, in English.

Since the beginning of March 2017, polls have indicated that the anti-establishment party (PVV) will be second in the race while the liberal party score (VVD) should win the largest number of seats.  Yesterday all 4 polls that came out showed the liberal party VVD (Mark Rutte’s party) ahead of the race followed in second place by PVV (Geert Wilder’s party).

One hopeful sign for the VVD is that historically, the PVV have always underperformed on the election day itself.

Two reasons why Mark Rutte’s VVD party is ahead and likely to stay that way:

What does this mean?

Even if Geert Wilders’ Eurosceptic party (PVV) wins the most seats, he will struggle to form a government due to the lack of coalition partners: none of them want to work with him.  Wilders’ PVV and Rutte’s VVD party are leading the current polls and all the other main political parties (including VVD) have publicly stated that they are not willing to cooperate with Wilders.

Since the PVV are unlikely to hold a majority government, a ‘Nexit’ scenario is unlikely.

Polls opened at 8am Dutch time this morning and will close tonight at 9pm Dutch time.  There should be a good indication of the results by early tomorrow (Thursday) morning at around 5-6am, Dutch time.

Eddie Buckle is Bloomberg’s UK government editor.  He is covering the Dutch elections for them.  You can follow him on twitter @EddieBuckle where is he is updating his feed regularly.  The following paragraphs are his views.

The prospect that Geert Wilders might emerge as the winner of Wednesday’s Dutch election was thrown into doubt by a poll on the eve of voting that showed his Freedom Party slumping to fifth place.  The final poll from I&O Research showed Wilders’s party on 16 seats in the 150-member lower house of parliament.  That was four seats less than in the previous I&O poll released Monday and compared with a high of 33 seats for the Freedom Party in December.  Prime Minister Mark Rutte’s Liberals rose three seats from the previous poll to 27 seats in Tuesday’s survey.  The centrist D66 party, the Greens and the Christian Democrats were all ahead of the anti-Islam, anti-European Union Freedom Party.  While the I&O survey could be an outlier, the bulk of the polling was conducted after a diplomatic dispute erupted over
the weekend between the Netherlands and Turkey in which Rutte was deemed to have handled well. Turkish President Recep Tayyip Erdogan accused the Dutch government of Nazi-like behaviour after Rutte refused to let Turkish ministers address a pro-government rally in Rotterdam. Rutte sought to de-escalate the spat, while Wilders said he should have taken tougher action against Turkish diplomats.

‘There is support among voters of all parties for the performance of Mark Rutte’ in the crisis, I&O said in a commentary to the poll. It found 62 percent of voters backing the way Rutte acted, including 59 percent of Freedom Party backers, with only 10 percent of all voters supporting the way Wilders performed.

When Wilders and Rutte faced off in a nationally televised debate on Monday evening, the Freedom Party leader told the prime minister: ‘we must directly expel the Turkish ambassador and the rest of his staff from the country, otherwise we accept that we are being insulted’.

Rutter’s response was to tell Wilders: ‘that’s the difference between tweeting from your couch and governing the country. If you govern the country, you have to take sensible decisions and that isn’t sensible’.  (Nice one Rutte).

They’re doing quite a nice by the minute update too.  It’s always useful to have this sort of thing to follow as sometimes the formal polls are difficult to follow.  I checked for the I&O poll and it was all, well, Dutch to me.

I’ve mentioned this Europe Elects before.  They’re quite useful and publish regularly updated polls for all European elections so definitely worth taking note.  They operate on twitter @EuropeElects and on Facebook and will be keeping a constant eye on the poll figures.

They’re doing a live blog on the Dutch elections.  You can follow that here:

Politico also do a useful background article on all you need to know for the Dutch elections:

Politico refers to the following poll: http://peilingwijzer.tomlouwerse.nl.  Once again, it’s all in Dutch so I’d stick with Europe Elects, Bloomberg, the Daily Express or of course, the BBC.

Reuters are also doing their own poll which has literally, as I was writing, flashed up on twitter.  I like their update as under the parties section, they have put little cartoons of all the candidates and what each one stands for so for me, this is brilliant:

So far the midday turnout has been 33%, so that’s 6% higher than the last elections in 2012.  Total turnout in those last elections was 74.6% but obviously we do not have those figures yet.  Not surprising really: it’s a nice day and the campaign’s been pretty racy (no pun intended on the xenophobic viewpoints of Wilders).

Here’s another good explainer to the Dutch elections, written on 9th March 2017.  It’s short and concise:

Comment On Dutch Politics: Update on today’s elections and useful links to polls

I picked up on the swing away from Wilder to Rutter but not in this detail so thank you. Hopefully (hate sounding like a footballer) this will slap down a marker for extreme right wing populism in Europe