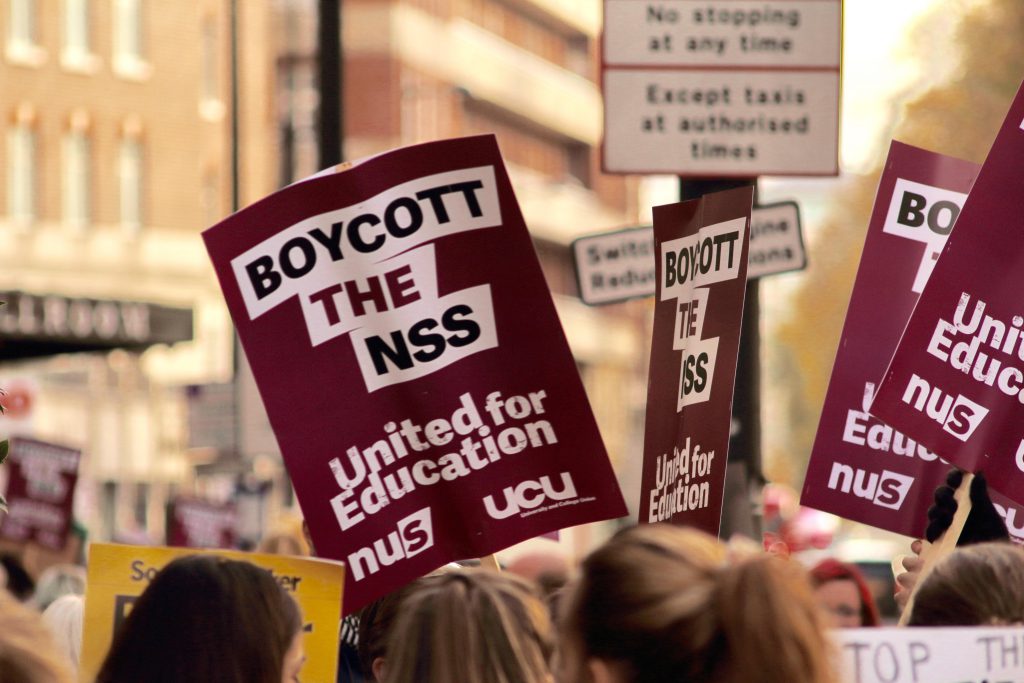 From September this year, all universities who have participated in an Ipsos Mori survey that is completed by final year students will be able to increase their tuition fees to £9,250.  The Ipsos Mori survey will be linked with new legislation that allows universities to be ranked according to what students have said about their learning experience and after 2020, only those universities that have the best ranking will be able to further increase their tuition fees in line with inflation.  By that time, some undergraduate degrees could end up costing £12,000.  Post graduate courses of course are often more.

For some time now, Ipsos Mori have carried out annual surveys on UK universities that students in their final year are asked to complete.  It is not new and is known as the National Student Survey (NSS).  In these surveys, the final year students comment on their experiences at the universities they attended.

So why are we writing about this?

This year there is a slight difference. The results of the student surveys are going to tie in with new government legislation that was introduced in April 2017: The Higher Education and Research Act, 2017.  One of the stipulations in this act is that universities that achieve a high student ranking will be able to increase their fees in line with inflation.  How do they achieve a high ranking?  The students answer questions along government guidelines set out in the Teaching Excellence Framework, also known as the TEF.  The government say that the TEF initiative is aimed at recognizing and rewarding excellent teaching and learning.

What sort of things are asked?

The survey looks at NSS scores.  It also looks at the number of students who drop out and what students end up doing once they graduate, including the amount that they earn.  However, concerns have been raised that excellent teaching cannot merely be recognized by way of a survey that the students no doubt complete in a hurry to get it over with so that they can then focus on the rest of their work in their final year.  I recall completing my survey in such a manner if I am to be honest.  None of the three measures being considered for the TEF: dropout rates, graduate destinations and salaries, and NSS (National Student Survey) scores, have anything to do with teaching quality.

The first surveys were distributed in January 2017 to universities who chose to participate in the survey.  Many have not yet been returned so the universities have been given longer to collect them.

Why haven’t the surveys been returned?

In previous years, Ipsos Mori who carry out the NSS survey, have had a return rate as high as 75%.  However, the National Union of Students have established a UK wide campaign entitled #Dontfillitin to prevent students from completing it.  Their gripe is that tuition fees should not be correlated to the results of a survey.  NUS Vice President Sorana Vieru is quoted in the Guardian as saying: ‘We cannot stand by and allow misinterpreted student feedback to be used as a sly way of raising tuition fees’.

The NUS argue that universities already conduct internal reviews of their teaching performance and that the only reason the government therefore use the NSS statistics is to hike up fees.  There is an argument in favour of the national survey that, because it functions comparatively and carries the hallmark of an independent auditor, it makes it much more helpful for prospective students to decide which university to go to.

No one argued with the survey until it became linked to a fee increase.  In fact, the Higher Education Funding Council for England (HEFCE), have said that past surveys have been useful in that they have given students a voice, the results of which have helped academic institutions to improve teaching and the learning experience of their students.

Are there many universities taking part in the #Dontfillitin campaign?

Universities in Cambridge, Manchester, Bristol, Sheffield, Liverpool, University College London and Kings College London are all below the 50% threshold that Ipsos Mori are required to reach in order to make the results of the surveys credible.  Many academic institutions have encouraged their students, whether via the Student Union web site, the university news portal or the student newspapers published online not to fill in the forms.  They find themselves caught between a rock and a hard place: whilst they don’t want to diss their university, they don’t want to see an increase in tuition fees for a future generation of students.

Please explain more about the TEF

The Teaching Excellence Framework is new.  It was first introduced in the House of Commons by Universities Minister Jo Johnson in May year in an endeavour to assess the quality of teaching in English universities.  His initial proposals were published in a government paper, the Higher Education Green Paper, in November 2015 and were part of the Conservative Party’s 2015 general election manifesto which, according to the Higher Education Funding Council for England, aimed to ‘recognise and reward excellent learning and teaching’.

Under the TEF, universities will receive a ranking:  gold, silver or bronze.  Only the gold and silver ones will be able to increase their fees in line with inflation.  The TEF will be based on three metrics: (1) teaching quality (using the NSS); (2) learning environment, including drop out rate as well as technology and extracurricular activities; and (3) student outcomes and learning data, including data on employment levels six months after graduation.

What are the arguments for TEF?

The government is hoping that in adhering to these guidelines, universities will be prompted to pay the same attention to the quality of their teaching as they do to their research.  They argue that if fees don’t increase alongside inflation, they will end up being eroded by it and in time, this will end up reducing the quality of the education on offer.  Furthermore, they say that the guidelines are more likely to ensure that students get the high quality education they pay for and that the guidelines mark an important shift from the provider to the consumer.

The government also argue that within its framework, the TEF attempts to address some of the external challenges many students face such as social disadvantage, age and race.

What are the arguments against the TEF guidelines?

Critics say that the challenge of measuring teaching excellence is s great that we should not try.  Soraya Vieru, already quoted above, says that the quality of eduction ‘doesn’t grow on fees’.  Chris Husbands, chair of the TEF panel, says that he does not think ‘student satisfaction is an accurate proxy for teaching quality’.  I would go along with that.

Will the boycott work?

The government will go ahead and classify the universities anyway, even if means they have to use surveys from the last 3 years instead.  The Telegraph earlier this year said that the government had already committed to fee rises in universities offering high standards of education.

If the government have already pledged to allow universities to increase their fees, they may as well make sure that the best universities are living up to their reputation and the only way of doing that is to ask the students themselves.  Some say that students would be better off arguing along clearer lines for the benefit of future students and focus on a more principled case against fee rises.  One article I read suggested that boycotts such as these only closes off the opportunity for dialogue between the NUS and the government, thereby making student voices even smaller.  The University of Warwick’s online publication ‘The Boar’ suggests that it would have been better for students to vote for an amendment to the government’s TEF motion, rather than completely disengaging with it by way of a boycott.

The House of Lords already tried this

As you know, before the government can implement legislation, it has to go from the House of Commons to the House of Lords and back again. We saw it recently with the Article 50 bill to leave Europe.

The Bill went to the House of Lords for debate in March this year and the House of Lords duly raised several objections. They asked for a series of amendments to be made to the Bill.  One of the amendments they voted for was that Johnson’s TEF would be separated from tuition fees and the vote for passing that amendment won by 263 votes to 211.

And how did the House of Commons respond?

The House of Commons didn’t incorporate the suggested amendments, although they say that some concessions were made: i.e. a delay in the timeframe in which the university rankings can be used as a tool for elevating fees.  Instead of that happening immediately, it was decided that it would not come into effect until 2020. Prior to that, in 2019, the government have promised that the TEF will be reviewed to make sure that the criteria they are using is working.

Here is a link to the timeline of the legislation from when it was first introduced in the House of Commons on 19th May 2016 to when it was implemented by Royal Assent on 27th April 2017 and became law.

You can read some commentary on the proposed amendments and how they were addressed in some the sources below.

What if the Tories are ousted from power in the June elections?

Well that’s a whole new ball park.  Part of the Labour party election manifesto is to abolish tuition fees altogether and reintroduce maintenance grants.  Let’s see how that one goes.  It is highly unlikely that Labour will get in as Theresa May is predicted to sweep the floor with him.

Here is a little video from UCL explaining how the TEF is linked to the NSS and encouraging students not to fill it out. It is incorporated within this article and can also be viewed on you tube. The article is quite a good one as it offers an alternative view point to that of the NUS. The article argues that ‘the Teaching Excellence Framework will improve quality and value for students’:

The Guardian on the boycott, written by NUS Vice President Sorana Vieru back in January this year when the surveys were first distributed, 5.1.17:

Should TEF scores be linked to tuition fees?  The case for and against in the Times Educational Supplement (TES), 7.5.17:

House of Lords rejects plan to link TEF to tuition fees, TES, 6.3.17 (not that the House of Commons paid any heed to them):

More up to date information on the UCAS web site as regards when the changes come into effect:

Government White Paper, May 2016, ‘Success as a Knowledge Economy: Teaching Excellence, Social Mobility and Student Choice’.  This set out the broad delivery framework for the TEF over years 1 -4:

More background to the survey and a clear, concise explanation by the Telegraph, 27.1.17:

Warwick University publication ‘The Boar’ on NSS links with TEF, 8.2.17:

And on the HOL decision to separate TEF from tuition fees, also from The Boar, 11.3.17:

26th April 2017 (the day before the legislation was passed), Emergency Lobby of Parliament over HE Bill, Convention of Higher Education.  Says that the HOC concessions in relation to the concerns raised by the HOL were not sufficient:

Bournemouth University blog, 2.5.17, on the outcome of the legislation: