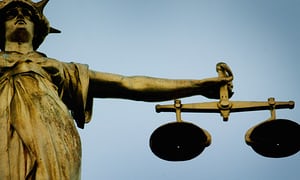 In the burrows of the Nightmare
Where Justice naked is;
Time watches from the shadow
And coughs when you would kiss.

WH Auden, ‘As I walked out one Evening’

As I was driving home to my boys last night at around 5pm, I heard a lady on the PM news show on Radio 4 being interviewed about a case that had reached its conclusion in the UK Supreme Court earlier that day.  The case involved a 66 year old man, John Walker, who had appealed his former employer’s decision not to grant his male spouse equal pension rights.  Mr Walker had initially won when he submitted his argument to the Employment Tribunal after his employers said no to his request that his spouse be entitled to the same rights as a female spouse in so far as his pension was concerned.  That decision of the Employment Tribunal was overturned 2 years later when his employers appealed and said appeal was further upheld by the Court of Appeal 1 year after that.

‘The salary paid to Mr Walker throughout his working life was precisely the same as that which would have been paid to a heterosexual man.  There was no reason for the company to anticipate that it would not become liable to pay a survivor’s pension to his lawful spouse’.

To deny his partner access to the funds would amount to discrimination on the grounds of sexual orientation, he added, even though the pension rights were earned before the Civil Partnership Act came into force.

‘Mr Walker’s husband is entitled to a spouse’s pension calculated on all the years of his service with Innospec [the chemicals company where he worked], provided that at the date of Mr Walker’s death, they remain married’.

Justice has looked kindly on Mr Walker and he has led the way for others like him.

Mr Walker was represented by Emma Norton from the human rights group Liberty, the lady on the radio who was being interviewed.  I have provided a link to this interview in the sources below if you are interested: the relevant part is only 3 minutes and I have given you the timings.

The Respondents were represented by Eversheds with the Department for Work and Pensions sitting in as an ‘interested party’.  The DWP provided much of the legal argument for Innospec, Mr Walker’s former employers.

Relying on the Equality Act exemption, Innospec said that should Mr Walker die, his husband would not receive the same survivor benefits he would if he were a woman.

Those benefits would not include all the contributions Mr Walker had made prior to 2005, leaving his husband with a pension of only a few hundred pounds a year.  Innospec were supported by the Department of Work and Pensions, who joined forces with them and led much of the argument against Mr Walker (Liberty, 12.7.17).

Paragraph 4 of yesterday’s Supreme Court Judgment alludes to this:

‘Paragraph 18 of Schedule 9 to the Equality Act 2010.  In broad outline, this provision allows an exception to the general non-discrimination rule implied into occupational pension schemes.  Under this exception, it is lawful to prevent or restrict access to a benefit, facility or service to a person (a) where the right to that benefit etc accrued before 5 December 2005, or (b) which is payable in respect of periods of service before that date’.

Under the law, had Mr Walker been married to a woman, what would she have been entitled to by way of pension?

Paragraph 5 of the Judgment:

‘If Mr Walker was married to a woman, or, indeed, if he married a woman in the future, she would be entitled on his death to the pension provided by the scheme to a surviving spouse. When the claim was issued, the value of that ‘spouse’s pension’ was about £45,700 per annum.  As things stand at present, Mr Walker’s husband will be entitled to a pension of about £1,000 per annum (the statutory guaranteed minimum)’.

Mr Walker retired in 2003, having worked for the chemicals group Innospec for more than 20 years.

Walker has been with his now husband, a former computer executive, since 1993.

The Civil Partnership Act 2004 came into force in December 2005.

Mr Walker and his now husband entered into a civil partnership shortly after that, in January 2006, on the first day that it was legally possible to do so.  That was later converted to a marriage.

Yesterday however, the Supreme Court decision went in the favour of Mr Walker.

The Supreme Court Judgement can be read in full if you so desire.  I have provided a link to the Judgement in the sources at the bottom of the article.  It gives full details of all previous legal proceedings relating to the case in which Mr Walker won his Employment Tribunal initially in 2012, then lost when his former employer appealed 2 years later.  He lost again when that decision was upheld in the Court of Appeal in 2015 and yesterday’s Supreme Court ruling has now changed that.  The ruling also refers to previous case law.

Some further legal points from the Judgement

‘Although EU law does not impose any requirement on member states to recognise same-sex partnerships, the European Court of Justice has held that if a status equivalent to marriage is available under national law, it is directly discriminatory contrary to the Framework Directive for an employer to treat a same-sex partner who is in such a partnership less favourably than an opposite-sex spouse’.

‘If Mr Walker married a woman long after his retirement, she would be entitled to a spouse’s pension, notwithstanding the fact that they were not married during the time that he was paying contributions to his pension fund.  Whether benefits referable to those contributions are to be regarded as ‘deferred pay’ is neither here nor there, so far as entitlement to pension is concerned.  Mr Walker was entitled to have for his married partner a spouse’s pension at the time he contracted a legal marriage’.

‘The date when that pension will come due, provided Mr Walker and his partner remain married and his partner does not predecease Mr Walker, is the time at which denial of a pension would amount to discrimination on the ground of sexual orientation’.

Paragraph 76, the final conclusion of the Court:

‘I would allow Mr Walker’s appeal and declare that, in so far as it authorises a restriction of payment of benefits based on periods of service before 5 December 2005, paragraph 18 of Schedule 9 to the 2010 Act is incompatible with the Framework Directive and must be disapplied.  I would make a further declaration that Mr Walker’s husband is entitled to a spouse’s pension calculated on all the years of his service with Innospec, provided that at the date of Mr Walker’s death, they remain married’.

What this final paragraph actually means

Civil partnership came into force in the UK in December 2005 and Walker entered into one shorty thereafter in January 2006.  What the ruling says here is that it is illegal for Walker’s former employer to deny his spouse access to pension payments that accrued prior to that date.  The reason?  Had Mr Walker married or entered into a civil partnership with a woman in January 2006, she would have been permitted access to the pension payments that had accrued prior to December 2005, when civil partnerships first became legal in the UK.

A couple of interesting points from The FT

There is no further recourse for appeal other than the European Court and as this decision has been made on the basis of EU law, that would be pretty pointless.

In concluding I would draw your attention back to paragraph 19 of the Judgment.  When I read about this ruling in the FT this morning, I wondered how this would now affect Germany who have only recently legislated to accept gay marriage.  There is no obligation upon any EU member state to legalise gay marriage but once that decision has been made, it would be illegal and discriminatory, under EU law, for that member state to deny a spouse access to equal pension rights, irrespective of gender.

What now remains to be seen is how the UK decide to legislate in this regard once the withdrawal process from the EU is complete.  Mr Walker is seeking assurance from the government that they will not roll back on the decision of the Supreme Court post Brexit. The rights of the LGBT community are protected far more under EU law than they are in UK law and this is something that will certainly need to be addressed.  At least our lawyers won’t be going out of work any time soon!

The press release from Liberty yesterday, 12.7.17, in which the husband’s face is blanked out:

The Independent, 12.7.17.  Always interesting to scroll down to the end of these articles and read the comments beneath the line:

Here is the link to the BBC Radio 4 PM show from 5pm yesterday in which Liberty lawyer Emma Norton, representing Mr Walker, is interviewed.  The interview can be heard 15 minutes into the show and lasts approximately 3 minutes: 15.10 – 18.52:

Lady Justice atop the Old Bailey, London (I couldn’t find one of her by the Supreme Court).  Photograph by Stephen Hird for Reuters, published in The Guardian: