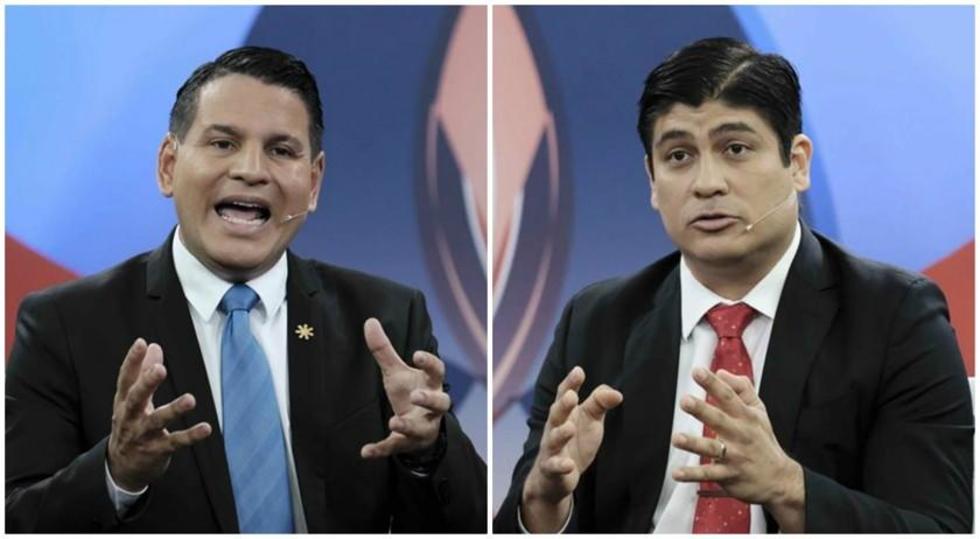 Above photo: Current President Carlos Alvarado Quesada on the right with his 2018 Presidential Opponent, Fabrico Alvarado Munoz, on the left

On Sunday 6th February 2022, Costa Rica will elect a President, two Vice Presidents and all 57 seats in the legislature. It does this every 4 years.

Costa Rica is a ‘relative safe haven of stability in Central America’ (AQ, 13.1.22). The current young President is Carlos Alvarado Quesada of the centre left Citizen’s Action Party (PAC). He came to power in April 2018 when he beat a conservative evangelical pastor, also called Alvarado, who campaigned against same sex marriage: something that President Alvarado has legalised. According to The Guardian: ‘It was a rare victory for a centre-left candidate in a time of rising global right wing populism and led Nobel economist Jospeh Stiglitz to conclude that Costa Rica was a beacon of enlightenment for commitment to reason, rational discourse, science and freedom’, (Guardian, 22.2.21).

Alvarado, as he is known, cannot run for another term due to consecutive constitutional term limits, but can run again later on in his career should he so wish.

Policies of note during his term:

Legalisation of same sex marriage in 2020 – It took a while. According to Human Rights Watch, President Alvarado asked the Inter-American Court of Human Rights in 2016 to interpret the right to privacy and the right to equal protection under the American Convention on Human Rights. In 2017, the Inter-American Court ruled that any rights that apply to same heterosexual couples should also apply same sex couples. In 2018, Costa Rica’s Constitutional Court followed suit and ruled in favour of same sex marriage. The issue divided voters in 2018 when Alvarado’s rival candidate, Fabrico Alvarado, mentioned above, pledged to ignore the ruling off the Inter-American Court and keep things as they were. Much of society were divided over the issue. Fabrico is running again in this election and polls put him in third place.

Climate – Costa Rica is aiming for total decarbonisation by 2050. They have regrown large areas of tropical rainforest, having suffered some of the highest rates of deforestation in the world throughout the 1970s and 80s. In January 2021, more than 50 countries committed to the protection of 30% of the planet’s land and oceans as part of the High Ambition Coalition (HAC) for Nature and People, an initiative led by Costa Rica, who are a co-chair, along with France and the UK. It is hoped that this can lead to an international agreement to halt biodiversity loss. To date, the world has never met a single target to stop the destruction of wildlife and life sustaining ecosystems. Alvarado has had discussions with US Senator John Kerry, former US Secretary of State under Obama and currently an ambassador for climate change, on what can be done for the environment. Hurricanes in the whole geographical region have become more frequent.

Education and Healthcare – Costa Rica invests heavily in both. As of January 2022, 75% of Costa Ricans had received at least one shot of the Covid vaccine.

Issues for the Electorate Today

Pandemic fuelled unemployment, a fall in tourism, corruption, the suffering economy and rise in the cost of living have all taken their toll on Alvarado his PAC’s popularity. Some are concerned about the incoming migration from Haiti. Unemployment is high at around 19%. Costa Rica has also been suffering from debt since the 1980s and this has been getting worse. It now has a 52.9% public debt to GDP ratio: the third highest in Latin America after Argentina and Brazil. In July 2021, the Legislative Assembly finally agreed to an IMF loan of $1.8 billion dollars.  (Getting any legislation passed in Costa Rica is notoriously slow and can take around 3 years – quite long considering they are only elected for 4).

Whichever government is installed, they will have to ‘walk a fine line between making spending cuts that risk rekindling popular revolts led by public workers in October 2020 versus not going fast enough and exasperating investors whose patience has worn thin’, (Q Costarica, 21.1.22).

There are 27 in total; 4 of whom are polling above 7%. The top 4 candidates are discussed here:

The candidate from the ruling Citizen’s Action Party, Welmer Ramos, is not included above as the PAC are, according to the article above, ‘facing a wave of anti-incumbent sentiment and internal divisions’. Q Costarica put Ramos’ polling prediction at a mere 1%. Ramos is a lot older than the current President who is polling badly at below 15%. Furthermore, his PAC party stands to lose most or all of the 9 seats it currently holds in the Legislature.

According to Foreign Policy, the competition seems to be between Costa Rica’s two traditional king maker parties: the centre-left National Liberation Party (PLN) and the centre-right Social Christian Unity Party (PUSC). The PLN candidate, Jose Maria Figueres, was President from 1994-1998. Lineth Saborio of the PUSC, was one of the two Vice Presidents from 2002-2006.

Two round presidential electoral systems can sometimes encourage two diametrically opposed sides to adopt more moderate positions in the second round, as happened recently in Chile:

How the Elections Work

Elections for the Executive and the Assembly are held every 4 years. Consecutive re-election for both is prohibited under Costa Rica’s constitution, so if anyone wants to run again, they have to sit out at least one term. Voting in Costa Rica is obligatory but it is not enforced or penalised.

If no presidential candidate receives 40% of the vote in the first round, a second round will be held on Sunday 3rd April 2022 between the top two. The elections of 2014 and 2018 both went to a run-off.

The National Executive consists of 1 President and 2 Vice Presidents.

The Legislative Assembly has 57 seats/members. They are elected by 7 multi-member constituencies/provinces through a closed-list (that’s a party list), proportional representation system. There are between 4-21 seats for each of the 7 provinces, depending on its size. No one party tends to control the Assembly. In the last elections in 2018, the centre-left PLN (not the ruling party), won the most seats with 17. The PUC has 9.

There are no state/provincial governments. Municipal governments are the only form of sub-national government and they are formed by a deliberative body, composed by municipal mayors elected by popular vote.

Q CostaRica, ‘PAC expected get a beating in the presidential election: polls’, 25.1.22:

Also from Q Costa Rica, a closer look at some of the issues Costa Rica is facing today, 21.1.22:

(There is a tab in the top right hand corner that you can click on to change the language from Spanish to English. Historical data maps analyse the break down votes of previous elections)