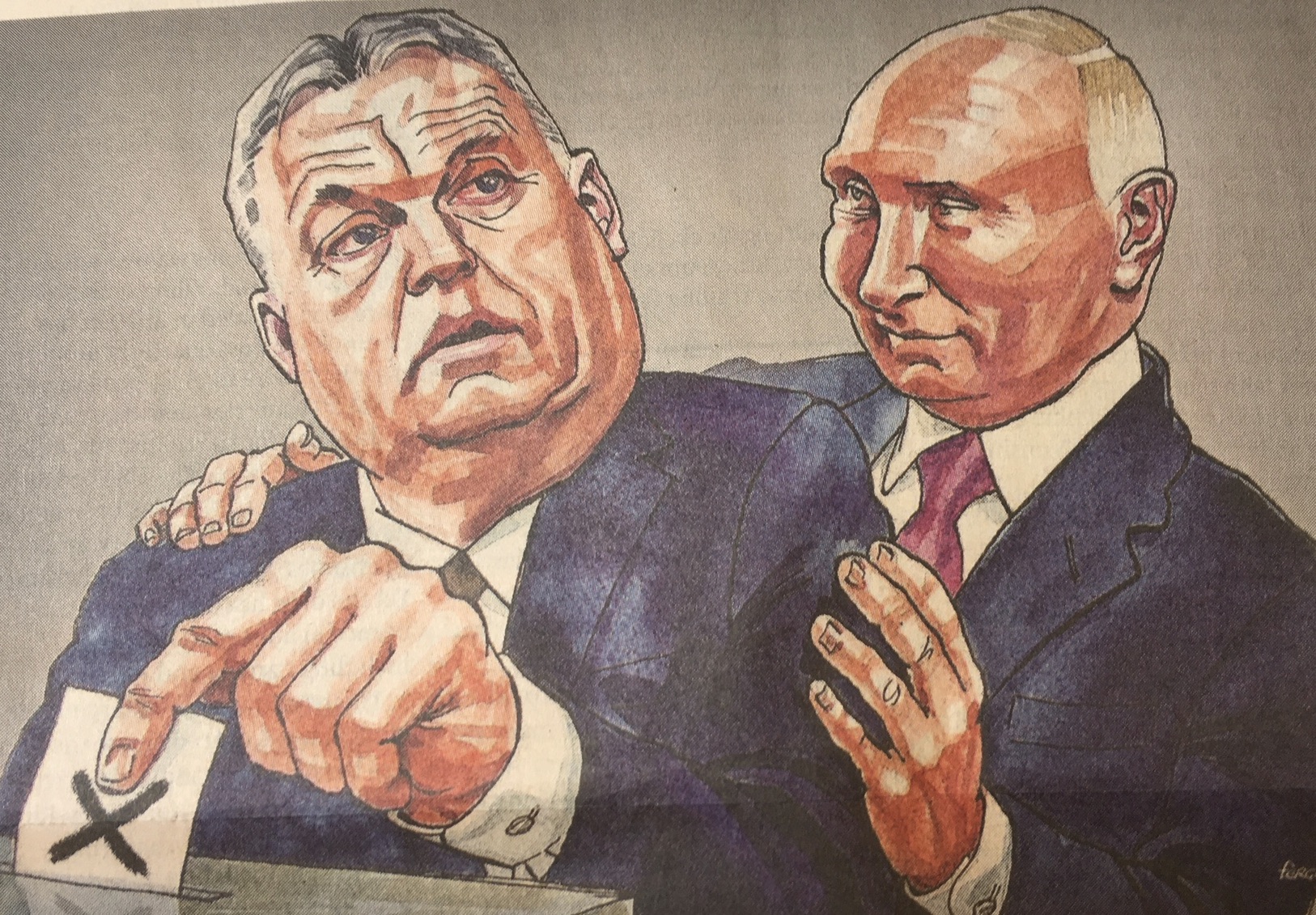 The incumbent far right Prime Minister and head of the Fidesz party,Viktor Orban, has been Hungarian Prime Minister since 2010. He is anti-semitic and anti-immigration. Orban famously built a barrier on Hungary’s border with Serbia and Croatia to keep out migrants to Hungary during the 2015 refugee crisis as a result of the war in Syria. In 2017 he built another, on the border with Serbia. Orban likes scaremongering and has blamed the Hungarian born philanthropist, George Soros, for trying to flood Hungary with Muslim immigrants. Orban didn’t seem to mind Soros back in 1989/90 when, after obtaining a Law degree from the University in Budapest, he spent a term at Pembroke College, Oxford, on a scholarship funded by him, (Commons Research Paper). He has been more amenable to taking in Ukrainian refugees but they are, of course, mainly white Europeans.

He says he wants Hungary to remain in EU, even though he is frequently annoyed with them. He is not great with protecting democracy, hence why Hungary was the only EU country to not be invited to Joe Biden’s Democracy Summit December 2021.

Towards the end of last year, Orban promised to refund income tax to families if he won and increase the minimum wage. He issued a special pensioner’s payment in November 2021 and gave two weeks of extra state pension payments in January.

It was hoped that a newly united opposition would throw out Viktor Orban’s increasingly corrupt government. 6 opposition parties from across the political spectrum joined forces under the banner of ‘Movement for a Hungary of Everyone’, to unseat him. Subsequently this coalition became known as the ‘United for Hungary’ coalition.

In October last year after 2 rounds of votes, the coalition chose Peter Marki-Zay, a centre-right candidate and the mayor of south eastern town Hodmezocasarhely, to be their front man. Marki-Zay is a 49 year old, Catholic father of 7. His mayoral win in 2018 was a surprise as the town was traditionally a Fidesz stronghold. There was no guarantee that all 6 parties would remain united if they did win but it was hoped a win would prevent Hungary sliding further down the authoritarian route.

The parties included in the coalition were: Democratic Coalition (DK); Dialogue for Hungary (PM); Hungarian Socialist Party (MSZP); Momentum Movement (MM); Movement for a Better Hungary (Jobbik); and Politics Can Be Different (LMP).

In November and December last year, polls put ‘United for Hungary’ just behind Orban, by 2% points. At that time, Putin had not invaded Ukraine and Orban had lost his early 2021 two thirds supermajority in Parliament. Hungary shares a border with Ukraine. Whilst the opposition highlighted the close relations between Orban and Putin and vowed to fight corruption, many in Hungary are fearful of getting caught up in the Russia/Ukraine conflict and there is reluctance to support an experimental coalition in such turbulent times.

A landslide win for Viktor Orban who won his 4th consecutive term as Prime Minister (his 5th in total). Orban, 58, is the EU’s longest serving leader and casts himself as an underdog defending his people against EU bureaucrats.

His nationalist Fidesz party won 53% of the vote and easily beat the 6 party coalition that had formed in the hope of beating him. Fidesz won 135 seats in parliament, which is more two thirds and more than his party got in the last elections. The United Opposition won 35% of the vote, giving it 56 seats in parliament. Some are of the view that the failure of the opposition stems from being seen as six small people rather than one giant, (Commons Research paper). The Guardian said ‘the opposition alliance failed to gel’. Opposition leader Marki-Zay, who didn’t even win in his own constituency, cast the poll as a choice between East and West, charging Orban with turning Hungary toward Russia and away from the EU where it belongs, (Deutsche Welle).

The hard right leader of the Jobbik party, Peter Jakab, joined the United Opposition to try to oust Orban. He has reproached Marki-Zay for lacking clear focus. With Jobbik not even on the ballot as a party, it lost most of its voters to Fidesz and some to the new ‘Homeland’ party (see below).

Most MPs in Hungary are elected from single member districts and this makes it harder for smaller parties to win seats.

With this, Viktor Orban has retained the two thirds super majority he needs should he decide to alter the constitution, again.

Of note, a new far right party, ‘Mi Hazank’ in Hungarian, meaning ‘My Homeland’, has entered parliament for the first time with 6 seats. It came to prominence during the pandemic as an anti-vaccine party, (Euro News).

Orban gloated afterwards: ‘We won a victory so big that you can probably see it from the Moon, and you can certainly  see it from Brussels’, (The Week, printed edition, 9.4.22).

In addition to the National Assembly elections, Hungarians also voted in a referendum on questions related to new laws on the promotion of LBGTQ topics to minors. Orban is Christian and anti LGBTQ. He wants to restrict what schools can teach about being gay and transexual. This was a ploy for Orban to mobilise Hungary’s conservative electorate. For a referendum vote to be valid in Hungary, half of all voters need to cast a valid vote, which means the paper on which the vote is cast cannot be spoiled. If the threshold is reached, then more than half of those voting need to vote in favour. Whilst many voted in favour of Orban’s suggestions, this criteria was not reached and therefore the result was declared invalid. According to the UK Commons Research paper in the sources below, a joint statement by human rights and LGBT+ advocacy groups in Hungary had encouraged voters to spoil their ballot in order to ensure that this was the case.

The Organisation for Security and Co-operation in Europe (OSCE), an electoral monitoring body, found that whilst there were no problems on the day of the vote, there were concerns in the following areas:

In 2018 the Organization for Security and Co-operation in Europe described the Hungary’s elections as ‘free but not fair’, (The Guardian).

The EU, for the moment, have withheld the 7 billion euro post pandemic recovery fund from Hungary for Orban’s undermining of political pluralism, illiberal political values and corruption. Orban has made many of his friends rich during his time in power, largely as a result of misuse of EU funds. Hungary has the worst record of fraudulent use of EU funds of any other country in the union, according to the Economist.

Whilst Orban has joined the other EU member states in sanctioning Russia and has admitted that Russia started the war in Ukraine, he maintains closer ties to Russia than any other EU member state and has said that he would not stop buying Russian gas and will block any EU sanctions on Russian energy imports. To get around Russia’s financial sanctions, Orban is happy to pay in roubles. Russia and Hungary signed a new long term gas supply deal last year, no doubt at a discounted rate.

Whilst Orban has stopped short of criticising Putin’s actions openly, he has declined to allow arms shipments to Ukraine through Hungary.

Putin was one of the first world leaders to call and congratulate him on his win and indeed the two met one another in Moscow shortly before the 24th February invasion. Ukrainian President Volodymyr Zelensky is not a fan of Orban, saying that he is virtually the only leader in Europe to openly support Putin. Jobbik’s deputy leader and MEP, Marton Gyongyosi, has referred to Orban as ‘Putin’s Trojan horse in Europe’, (Commons Research Paper).

Whilst Poland has strongly condemned Putin’s actions in Ukraine, unlike Hungary, according to Poland’s de-facto leader, Jaroslaw Kaczynnski, the two are still closely aligned in other areas.

In a post election phone call with Putin, Orban is said to have asked Putin to announce a cease fire immediately. Further, he has invited Putin to Budapest for peace talks with Zelensky, Macron and Germany’s Olaf Scholz, although the latter were not informed of this offer beforehand. Whilst Putin accepted this proposition, he also said that the conditions to stop the war were something that only he and Zelensky could agree on.

Hungary has a population of roughly 10 million, which equates to 2% of the population of the EU. The next election will be in 4 years. The Guardian has called this one a ‘dismal day for democracy’.

Results of election from Politico:

Deutsche Welle on the election results:

Euro News on the election:

The Guardian on the election:

EU must be prepared for a possible rigged election in Hungary

The Week, the Economist and various articles from the Financial Times