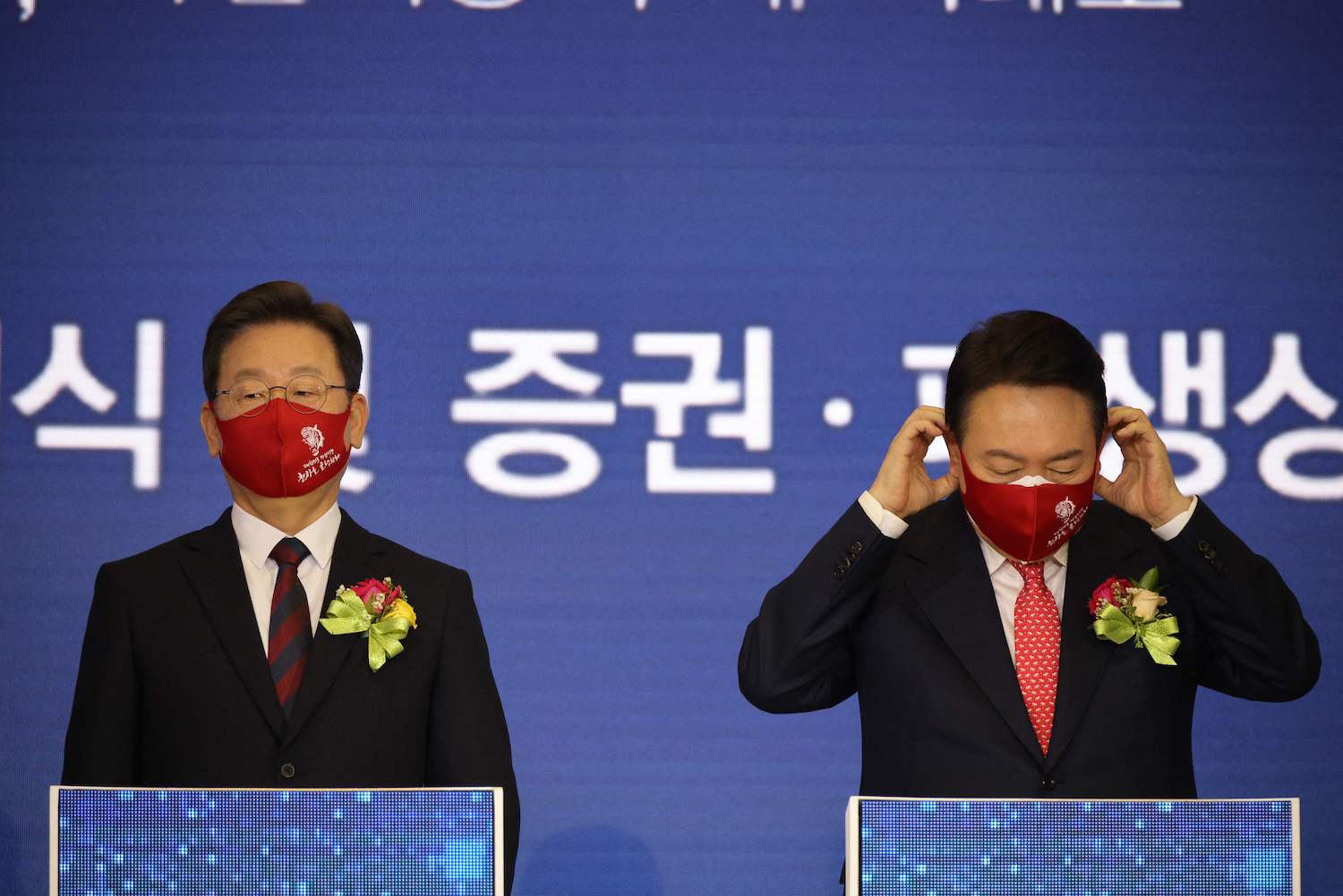 Above image taken from Foreign Policy article of 26.1.22 (see Sources and Further Reading). Lee Jae-myung of the ruling Democratic Party on the left; Yoon Seok-you, the Conservative candidate of the People Power Party on the right. The photograph was taken on 3.1.22 at the Korea Stock Exchange.

‘After all, South Korean politics is where confident predictions go to die’.

Neither candidate has experience in the National Assembly. Whoever wins will replace the constitutionally term limited outgoing President Moon Jae-in, elected for one five year term in 2017 after the 2016 impeachment of President Park Geun-hye. After a stint in prison for corruption, the former President’s 22 year sentence was repealed and she has now been pardoned, (Guardian, 25.12.21).

Ruling Democratic Party (DPK), Centre-Left Party: Governor Lee Jae-myung’s  political career is short. In 2018 he became Governor of South Korea’s most populous province, Gyeonggi, but stepped down in October last year to focus on his Presidential campaign. He was also a two term mayor in a suburb outside Seoul. Lee is a former Labour lawyer who has worked in some capacity in factories since the age of 13. He ran against Moon in the 2017 Presidential Primary. He campaigns for a universal basic income, plans for basic housing and finance programs, and cites Bernie Sanders as a political mentor. He has a practical Foreign Policy that supports working with both China and the United States.

People’s Power Party (PPP), Conservative Party: Yoon Suk-yeol is another new entrant to politics and describes himself as a ‘rationalist’ running against a ‘populist’. He rose to prominence as the prosecutor who investigated the scandals under the administration of impeached President Park Geung-hye and her predecessor, Lee Myung-bak. Both received a long prison term although Park was released in December, (Guardian). Yoon announced his entry into politics last year in June last year and the PPP nominated him as their Presidential candidate in November. He is fiscally conservative and plans to abolish the minimum wage and the maximum 52 hour week. This is a stark contrast to what Lee proposes. He has also said that he would deploy US nuclear warheads to North Korea if absolutely necessary, something that Lee is not keen on.

Whilst Moon is still popular amongst some centre-left voters, he has lost vast swathes of the young electorate. Unemployment and the cost of living are both high. House prices have increased almost 58% since Moon took office in 2017.

Despite many saying that Moon has been soft on North Korea, he has spent more on defence than his conservative counterparts did. His ‘peace through strength’ vision is backed by a strategy of ‘armed neutrality’, (War On The Rocks).

Moon’s DPK party has lost two mayoral races in South Korea’s two largest cities: Seoul and Busan. Both of these were won by the main opposition PPP party.

‘The real difference between liberals and conservatives is not whether they are doves or hawks, but whether they have preferred to pursue power accretion unilaterally or bilaterally through allying with Washington’.

Jongsuk Jeong, War on the Rocks

North Korea: Yoon takes a tough line on North Korea whereas Lee is similar to Moon. Lee sees North Korea’s nuclear programme as a ‘manifestation of the North Korean regime’s insecurity and political isolation’, (FP, 26.1.22). Of the two, he would be more likely to support a peace deal accompanied with economic and humanitarian assistance. He has also said that he would look at a a possible long term unification of the two Koreas that would be based on ‘coexistence and mutual prosperity in the short term’, (Yon Hap, 16.1.22). He has pledged to establish an international eco-tourist zone on the demilitarised border between the two Koreas. Additionally, he would allow South Korean tourists to visit Mount Kumgang in the north once more, something that was suspended in 2008 after a South Korean tourist was shot by a North Korean guard. Lee sees mutually beneficial, non-political manoeuvres as a starting point for talks between the two sides. Skeptics are inclined to believe that such gestures could result in in an erosion of South Korea’s liberal democracy. (Robert E Kelly on Twitter).

US Military Assistance: South Korea would like to have the autonomy of self-sufficient defence. At present, they rely on the United States. According to Foreign Policy, Lee advocates an early handover of  control over a war against North Korea from United States, what is formally known the ‘OPCON transfer’. Doing so too early, without ensuring South Korea’s military capabilities were up to it, could put the US-South Korea alliance in danger and it may be better to remain integrated, not autonomous. Lee is wary of additional missile defence cooperation with the United States. For him and many like minded Democrats, China is an important ally when it comes to talks with North Korea. South Korea and the United States presently collaborate on bi-annual defensive military exercises: one in March (which may be postponed until after the elections); and one in August. The March ones have been postponed until after the Presidential elections, (Yon Hap, 13.1.22).

The Quad (Quadrilateral Security Dialogue): The United States, Japan, Australia and India are presently members of this non-formal alliance of democratic countries. They started collaborating on a humanitarian basis after the Indian Ocean tsunami in 2004. Whilst military and security issues are discussed, so are other policy areas such as climate, supply chain resiliency (South Korea is important in this vein being a big chip producer), Covid vaccines and health issues. According to Foreign Policy, South Korea were invited to attend the first Quad Summit in March 2021 but Moon declined.

Yoon is keen to become part of the four party alliance. Lee would be less so as it is sometimes seen as a gang of countries ganging up against China.

Environment: In terms of nuclear energy, Lee is more wary after the 2011 Fukashima disaster. He has promised to take tough measures against Japan’s planned release of radioactive water from the power plant.  Furthermore, he would want to to block imports from fisheries that have been contaminated by radioactive water and toughen up checks on local fisheries.

Yoon sees nuclear energy as a pre-requisite to the eventual phasing out of polluting carbon emissions by 2050.

China: Both candidates differ when it comes to China. Yoon acknowledges China’s economic value but at the same time, is not keen on their coercive tactics. (In 2016, China imposed sanctions on South Korea after the US announced plans to install a THAAD anti-ballistic missile defence system). Lee is somewhat cautious of joining much of the West in their strategic confrontation with China and would rather preserve the status quo, which is a balancing act between the two. He has not been supportive of the diplomatic boycott of Beijing’s Winter Olympics in February.

The original Constitution was written in 1948 with the most recent being adopted in 1987.

President: The South Korean Constitution allows the President to serve for one single 5 year term only, a stipulation that was put in place after South Korea emerged from a long period of military dictatorship.

The last election for President was 9th May 2017. The next Presidential election will take place next month, 9th March 2022.

The Supreme Court consists of a Chief Justice and 13 Justices. It oversees non-constitutional judicial affairs and serves as the final court of appeal for all cases in South Korean law. The Supreme Court Chief Justice is appointed by the President with the consent of the National Assembly. His 6 year term is non-renewable. The other 13 Justices are appointed by the President upon the recommendation of the Chief Justice and with the consent of the National Assembly. Their 6 year terms are renewable.

Irrespective of the Court, all terms within the Judicial system are held for 6 years.

Council on Foreign Relations, ‘What Does Korea’s 2022 Presidential Election Mean for its Democracy?’, 26.1.22: