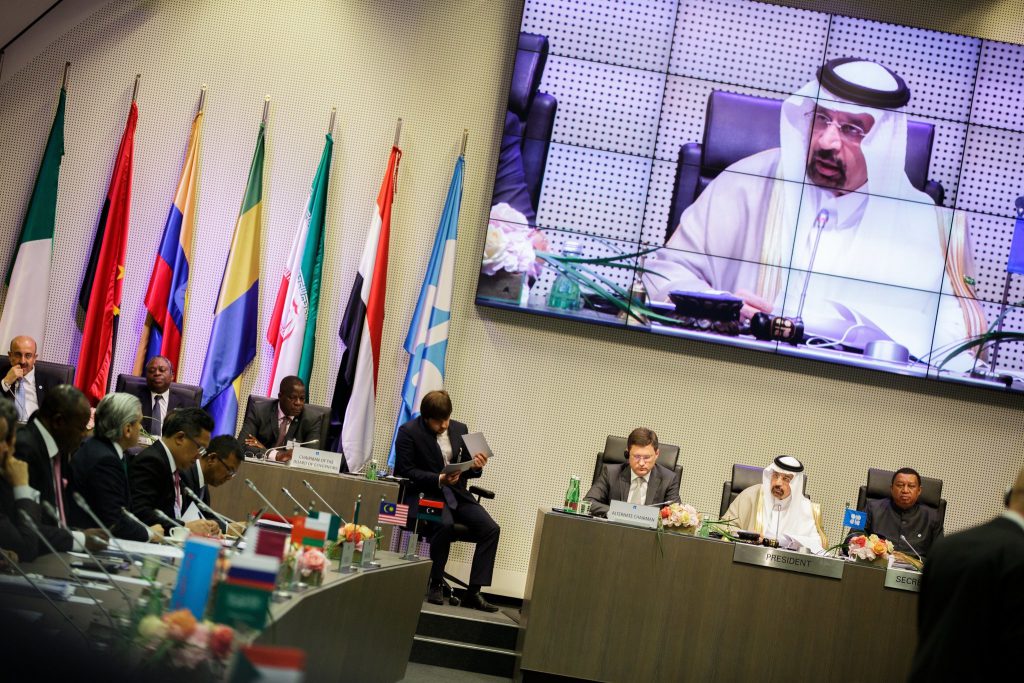 OPEC met in Vienna yesterday to discuss whether to extend production cuts beyond June.  Non-OPEC members such as Russia also attended the meeting.

What was the point of it?

Top Rated Forex Brokers say that they meet to ‘unify and coordinate the policies surrounding petroleum amongst its member countries with the aim of securing stable and fair pricing on behalf of producers of petroleum as well as ensuring a regular, economic and efficient petroleum supply to consuming nations and guaranteeing fair returns capital to anyone investing in the petroleum industry‘.  OPEC hold almost half of the world’s oil supply between them and as such, they have a huge impact on the prices of oil around the world.

Because of this crisis, OPEC leaders met in November last year and decided to lower production levels with effect from January 2017.  This was to last for six moths, until 1st July 2017.  When they met yesterday, those attending agreed to extend the cut in production for a further 9 months (the options being 6, 9 or 12 months), taking them up to March next year.

Saudi oil minister Khalid al-Falih who opened the meeting said that their goal to ‘accelerate market rebalancing’ had been met.  Saudi Arabia adopts a prominent role when the OPEC nations come together.  Whilst there is a principle of fairness when meetings are held with each member country getting one vote, Saudi Arabia end up being the de facto leader and can often swing votes because they are the biggest and most profitable oil exporting country in the world.  All the countries who join have to pay the same membership fee.

The next official meeting will be in November 2017 although the Monitoring Committee will continue to meet every 2 months to assess the situation.  According to Forbes, they will make recommendations to the larger group if members see a need to adjust policy.

Surely a continuation of the same is good for markets, no?

Well yes but some were anticipating that the production cut would be extended for an even longer period and perhaps even a further cut in production, but this would not serve them well.  If OPEC decreased their production even more, it would only lead to an opening in the market for US produced shale oil.  On the other side of the coin, if had they increased their production, oil prices could have collapsed even further: possibly even to as low as $35 a barrel, according to Bloomberg last week.

Why did the oil prices go down in the first place?

Two reasons mainly: excess supply of oil and increased shale oil production in the US.  Even though shale oil is more expensive to produce than crude oil, the more experience they get in extracting the shale, the cheaper it will become.  Producing their own oil means that the US buy less from abroad.

In 2014, oversupply resulted in a major fall in global oil prices.  At that time, Saudi Arabia increased oil production in the hope that lower oil prices (due to greater availability) would drive US shale producers out of the oil business.  Shale oil is more expensive to produce and if the oil was cheap, US shale producers would struggle to match the costs of production.  However, whilst this plan did result in the closure of some shale oil plants, the plan ultimately backfired.  Some shale producers had to close down but others focused on making their production techniques more efficient.  According to today’s FT, the costs for producing shale oil are now 40% less than they used to be and shale oil producers can still cope even if oil prices are as low as $40 a barrel (although they’d prefer it to be around the $50 mark).  And as the production costs have fallen, the number of shale oil producers in the US has increased.

Are there any other threats to the oil industry?

Increasing amounts of social unrest around the world, particularly in the Middle East, hasn’t helped things much either.  Neither has the stronger focus on environmental issues and  the growing popularity of the ‘green’ car.  Electric cars may still not widely used but they are becoming more so: one of the mum’s at my son’s school has one.  However, as with all things, the longer they are around, the cheaper they become to produce and the costs of batteries used in electric car production is gradually becoming less too.

Countries whose economies are largely dependent on oil need to think about divesting their economies gradually away from it and investing in other sources of income for the country.   When the price slumped, oil producing countries really suffered: Nigeria for one really struggled.  Even if the oil consortium get together to ensure that prices remain stable and don’t return to the lows of January last year, it is not going to stop the US producing more shale oil; nor will it make any difference in the realms of the environment and a gradual shift from oil to less polluting sources of energy.  And whilst this move away from oil is a good thing as far as the climate is concerned, if the Saudi economy were to weaken, so will the Saudi monarchy and ‘the resulting power vacuum will have unpredictable consequences’ (FT).  We don’t really need another explosion in the Middle East.

What does OPEC stand for?

Organisation of Petroleum Exporting Countries.  OPEC represents almost half of the world’s oil supply.  It is an organisation that was formed in 1960 in Baghdad by Venezuela, Saudi Arabia, Kuwait, Iraq and Iran.  The 5 founding members were then joined by a further 9: in 1961, Qatar; 1962, Indonesia and Libya; 1967, United Arab Emirates; 1969, Algeria; 1971, Nigeria; 1973, Ecuador; 1975, Gabon and 2007, Angola.  Equatorial Guinea became the 14th member yesterday.

The headquarters of OPEC were originally in Geneva, Switzerland but were relocated after 5 years to Vienna, Austria; hence the reason why most of the meetings are held there.

And the non-OPEC members who sometimes attend?

Other oil producing countries such as Azerbaijan, the Kingdom of Bahrain, Brunei Darussalam, Kazakhstan, Malaysia, Mexico, The Sultanate of Oman, Russia, Sudan and South Sudan.

How often do they meet?

Normally, they meet at least twice a year.  Extra meetings can be held as and when necessary.  In 2016, they had 3 meetings: two in Vienna in June and November and one in Algeria in September.  So far, yesterday’s meeting has been the first this year.

Why is it important to take note of the OPEC meetings?

If you work in financial markets, it’s always important to keep an eye on economic calendars and the OPEC meetings are one of the most important dates.  If a trader has an awareness of important upcoming news releases, they are able to plan their trades around it and they can decide to take risks or pull back accordingly.  The price of oil has a knock on effect on other assets, in addition to global economies and currencies.

Official OPEC notes from the meeting:

Here are some little graphs if you want to see how oil prices have changed over the years:

Comment On Finance: OPEC extend production cuts into next year

The probability that OPEC will agree to extend its cuts is at 100 percent, said Fesharaki, a former adviser in the late 1970 s to the Iranian Prime Minister.