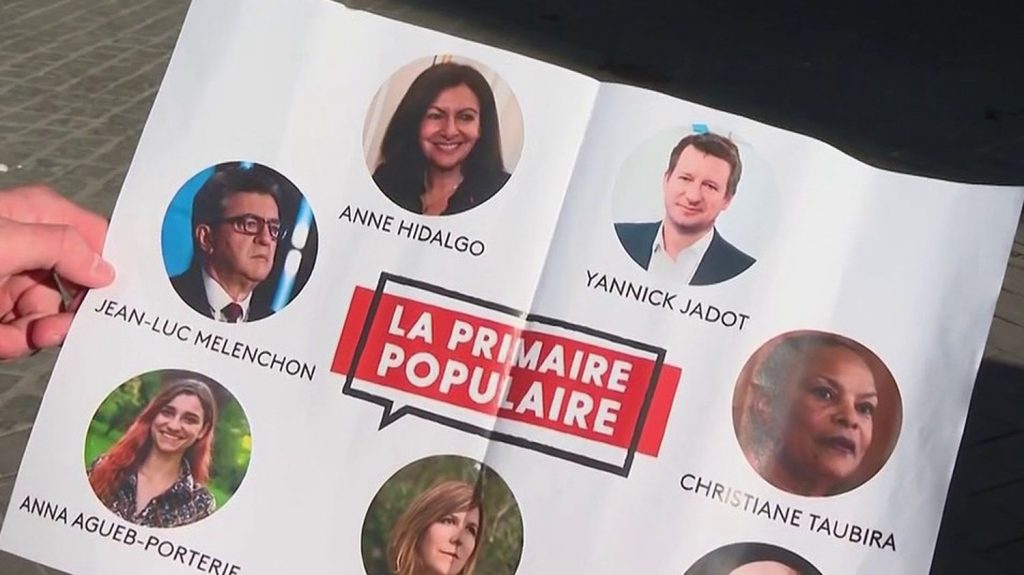 What is the People’s Primary Vote?

It’s new. An online poll created by independent activists in the hope of choosing a single left candidate to run in this year’s Presidential race. The idea was to provide an alternative to the current binary between Emmanuel Macron and his opposition on the right (Valerie Pecresse) and far-right (Marine Le Pen and Eric Zemmour). There were 467,000 registered in the online poll. Of this number, 392,738 voted over a 4 day period: from Thursday 27th January 2022 to Sunday 30th January 2022.

There were 7 candidates: five professional politicians and two from civil society, (Guardian).

The 392,738 members of the public who took part ranked each one in order of preference. Voters had to choose between the following categories: very good, good, fairly good, acceptable and insufficient. The former Sciences Po students who set up the online poll say the grading system was inspired by the grades used in wine tasting. The idea was that grading candidates in such a manner created less bias than when voting for a single candidate. Furthermore, as some people disagree on values when it comes to one number of another, using words in the grading process was considered to be more accurate. Another benefit of the method chosen for the online poll was that it made those who participated vote from the heart and someone they genuinely preferred, as opposed to voting from the head and opting for someone more likely to get to the run off, (Politico, 27.1.22).

The People’s Primary poll has no legally binding consequences. Despite this, it has so far been the primary with the highest number of participants in the 2022 presidential cycle. According to Politico, the environmentalists’ primary had 122,000; whilst the closed primary of the Republican party electing Valerie Pecresse in December 2021, had 140,000. Primaries in 2017 were a stark contrast. At that time under then President Francois Hollande, there were only two dominant parties: the Socialists and the Republicans. Both held open primaries: the Socialists had 2 million participants and the Republicans, 4.4 million, (Politico). When Macron was elected President with his ‘Republique en Marche’ party, it splintered the left and the right and left them in pieces. Neither party has recovered since, although the Republicans are faring better than the Socialists.

Will the others on the left still run?

Jadot, 55, Melenchon, now 70, and Hidalgo, 62, have all said they would continue to run in April’s Presidential Primary. Melenchon said in an interview on French TV, France 5, that he had been added to the 7 member list against his will, (Connexion). All 3 candidates have paid no attention to the result, with Hidalgo saying it was a ‘non-starter and has been for a while’, (Guardian). Melenchon, Jadot and Hidalgo said they didn’t want to be included in the poll in the first place.

Hidalgo represents the centre-left Socialist party, who have struggled when in the 2017 presidential race, their candidate Benoit Hamon suffered a huge blow. The then Socialist President Francois Hollande was not popular and did not stand. Hidalgo was officially selected by the Socialist Party to represent them in October last year. The French born daughter of Spanish immigrants has been Mayor of Paris since 2014. She presided over France’s terror attacks and the enormous fire at Notre-Dame cathedral.

2017 resulted in a Macron/Le Pen run off in the final round and many pollsters predict the same this time around. In this repeat scenario, it is likely that Macron will win a second term. More interesting would be a Macron/Pecresse run off. The Republican Party candidate Valerie Pecresse is no novice to politics. She worked as a civil servant and in 1997, as an adviser to Chirac, the then centre-right President. Pecresse passed her baccalaureate exams aged 16 (usually 18), and spent two summers in USSR as a student. She styles herself as two thirds Merkel and one third Thatcher.

Taubira, 69, served in the Socialist government of Francois Hollande as Minister of Justice from 2012-2016. During this period in 2013, her project to legalise same sex marriage was incorporated into French law, despite challenges from the right-wing opposition. She later resigned in protest at plans to strip French-born dual nationals of their citizenship when convicted of terrorism, (France 24).

She stood in the 2002 Presidential elections and won 2.3% of the vote in the first round. Taubira only decided to stand as a Presidential candidate earlier this month.

She was born in 1952 in the former French colony of Guiana, South America, to a single mother and nursing assistant who died at the age of 49. She is one of 11 siblings.

Some have suggested that Taubira’s main aim is to ‘lock horns with Zemmour’, the racist independent candidate on the far-right, ‘knowing full well that the Elysee Palace is already out of sight’, (France 24). If nothing else can be achieved by her candidacy, at least making Zemmour look even more racist that he already is, if that’s possible, would be a good thing.

Polls predict that all the left wing contenders will be booted out in the first round. The more serious candidates are Macron, Valerie Pecresse, Marine Le Pen and Eric Zemmour.

For background on Christiane Taubira, France 24, ‘Rebel stateswoman and poet’, 10.1.22:

Politico update their polls regularly on their web site: