French Politics: 577 seats, 18 regions, 96 departments. This article explains it a little more about how the French legislative elections work 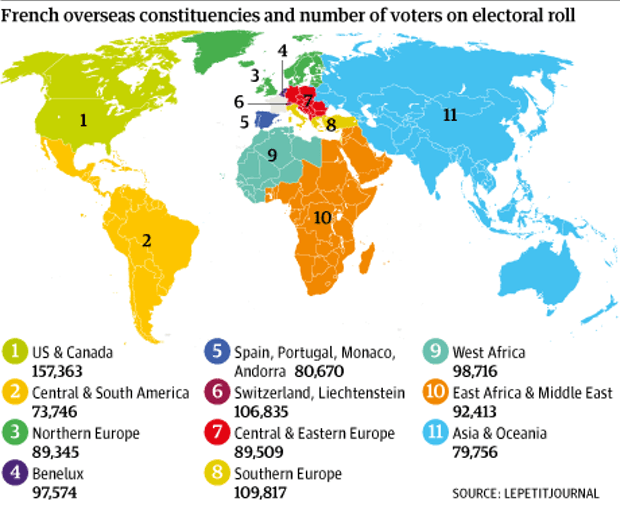 French Politics: 577 seats, 18 regions, 96 departments. This article explains it a little more about how the French legislative elections work

Further to my article earlier today on the purpose of the legislative elections, (http://www.makemeaware.com/french-elections-not-president-elected/), here is a little more information on how one arrives at the figure of 577 seats in the National Assembly.

What are the voting regions?

Let me explain as it’s a little complicated.

France has 18 regions in total.  In 1958 when de Gaulle formed the 5th Republic, it was 22.  This was changed in January 2016 and now there are 18: 13 on mainland France (Corsica is one of the 13, even though it is an island in the south), and 5 overseas.  Of the 13 in France, 9 of them are in the north and 4 in the south.  Each region has its own council and members of that council are directly elected by universal suffrage.  Each of these regional councils has its own regional president and each one also has its own full local administration.

The 18 regions are then divided into 96 departments, or local authorities.  Each of the 96 departments has its own prefect and elected assembly.  Napoleon called them ’emperors with small feet’.  Most cooperate with local and regional councils and they represent that locality’s interest upwards and also have the job of transmitting commands from above downwards.  Some regions have more departments than others; it depends on the size of the department and the number of people living in it.  For example, Paris has 18.  In the last legislative elections of 2012, Francois Fillon ran as the candidate (or deputy) for Paris 2.  He won that one.  The Vosges region (the pretty mountainous area on the border with Germany) has 4 and the overseas regions have 27.  The French Citizens Overseas are different from the ‘Overseas Regions’.  This was a new addition under Sarkozy and gave French citizens overseas the right to vote for their own representative for that region; not one on mainland France.  These regions make up 11 seats in the National Assembly and they were first implemented in the 2012 legislative elections.  The 11 French Citizens Overseas regions are as follows:

What’s the difference between an overseas territory and a region for French citizens living overseas?

The purpose of these 11 regions was so that the French citizens overseas could have their own representative as opposed to voting for a constituency on French territory.  Their creation required no change in the number of seats within the Assembly as the boundaries were actually redrawn to reduce the number of French territories to 566.

There are 577 constituencies in the 96 departments and each of these constituencies has its own deputy, which is like an MP.  It’s like a local council, you could say.  So in London, I would be Wandsworth.  When I was living in Nottingham, I would have been Rushcliffe.  You see how it goes.  Each of these constituencies gets to choose its own candidate and these candidates are called ‘deputies’; they are the French equivalent of our MPs.  The deputies have to be elected in the legislative elections; the ones that France is due to have this June.

And how are the MPs/Deputies elected?

Very similar to here in the UK.  You go to the polling booth and you get a number of candidates to choose from.  Each candidate represents a different party and you choose in accordance with whatever candidate you like or if you don’t know that candidate specifically, you just go with the party that you like.

Deputies are elected in a 2 round system.  If there is one winner that automatically gets over 50% of the vote, there is no need for a second round.  If however there is no outright winner, anyone with a vote of 12.5% or above goes through to the second round.  Here, there can only be one winner and all the others are eliminated.  In the 2002 legislative elections, of the 577 candidates, 519 went to a second round.  Once a deputy is elected, they remain the deputy for the period of government, which is 5 years.  And they take a seat in the National Assembly.

How are the electoral boundaries/constituencies fixed?

According to size and census.  As already stated, de Gaulle started out with 22 in 1958.  In 2010 under President Sarkozy, France adopted a new set of constituency boundaries to ensure a more equal number of voters per constituency.  33 were abolished and 33 new ones established; including a ‘Northern Europe’ one, which allowed French citizens in the UK to vote too (the UK is considered part of the Northern Europe constituency which also includes Ireland, Scandinavia and the Baltic states).  Traditionally, the French living abroad usually vote for the right so that’s probably why Sarkozy wanted the change as he represented the centre-right UMP (Union for a Popular Movement).  However, in the 2012 elections it went against him as in the first round in the UK, they voted for Socialist Party candidate Hollande.  Still, Sarkozy went through on the second round taking 52% of the vote.

Who changes the boundaries?

The Minister of the Interior is the one who is responsible for the boundaries.  Since they were first drawn up in 1958 when the 5th Republic was established, they have only been changed 3 times: once in 1986, once in 2009 and once again in 2016.  The changes took into account changes in the size of population and French citizens living overseas.

Each of the constituencies has around 100,000 voters.  Prior to Sarkozy’s change of boundaries, there were 108,000 voters in each constituency.  That was raised to 125,000 and was based on a more up to date census.  Some constituencies were removed or merged with others and some were added (such as the one for French voters living overseas).

In the last legislative elections in 2012, there were 7,639 candidates standing for 577 seats.

I hope this helps.

Bloomberg, 12.3.17, Information on the French Electoral System, including the legislative elections:

Information on the French National Assembly and how it is elected:

Brief history of the 5th Republic and all Presidents and Prime Ministers to date:

A summary, in English, of the French Constitution of 1958.  This copy prior to the change of Presidential tenure from 7 years to 5 (Article 6).  The summary is dated May 1997.  It outlines the role of the President, that of the Prime Minister and the voting procedures.

A guide to the French political system, including the role of the National Assembly and how it is elected:

The website for the French National Assembly, in French:

The website for the French National Assembly, in English.  It gives an updated version of the French Constitution of 1958:

The results for previous French presidential and legislative elections:

Mini guide to the French legislative elections of 2012:

More information on how the French National Assembly is elected, using past examples.  Article from 2007:

An article from UCL on the French regional governments (it also covers Spain).  It’s dated August 2000 but it gives a good overview:

Comment On French Politics: 577 seats, 18 regions, 96 departments. This article explains it a little more about how the French legislative elections work

French Elections: It's not all over once a President has been elected - Make Me AwareMake Me Aware Reply