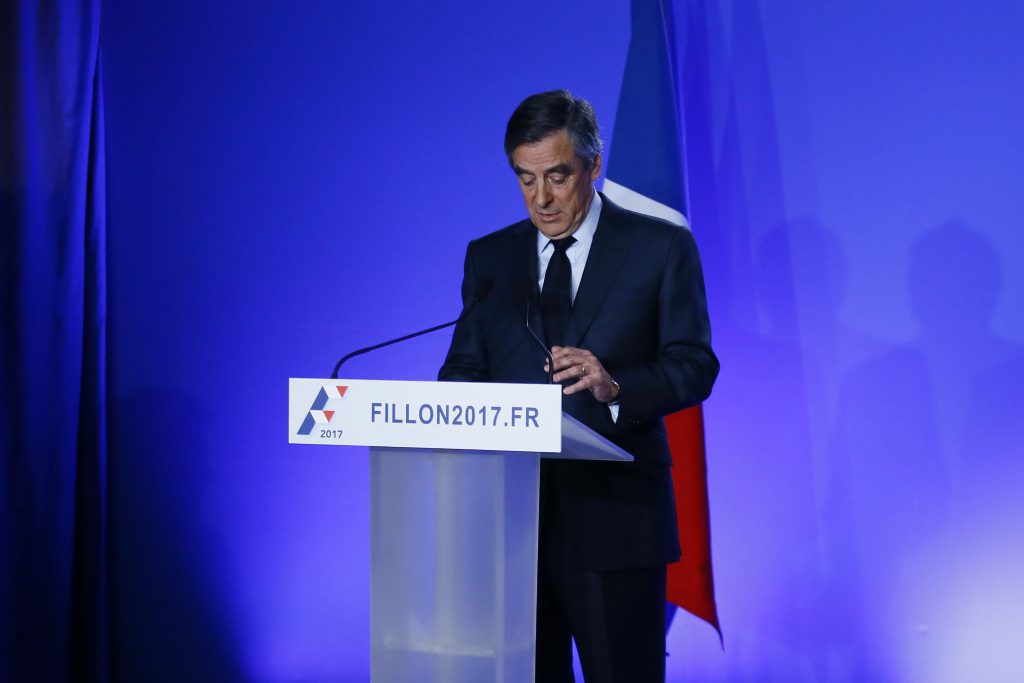 This morning I came into work only to hear reports that Francois Fillon’s campaign manager, Patrick Stefanini, had handed in his resignation.  The BBC reported it; the primary source for which was the French newspaper Le Figaro (the paper that I used to have delivered to my front door when I was doing my French A-Level).

Just 17 hours after Fillon had tweeted: ‘Je défendrai l’agriculture française. Elle a tous les a touts pour gagner, à condition qu’on lui en donne les moyens’, (I will defend French agriculture.  It has everything to gain provided we give it the means), he pulled out of an expected attendance at the annual agricultural fair in Paris.  At the last minute.  Fillon left his campaign team standing outside along with a number of French journalists after failing to show up this morning.

So what? Who cares about an agricultural fair?

The French countryside is a big part of French national identity and it is an important event for politicians to attend.  Marine Le Pen has already been this week and garnered a larger than expected number of supporters.  Macron went along today.  French farmers are struggling to survive with some of them earning a mere 500 euros a month, despite sometimes working a 7 day week from dawn till dusk.  As such, there is a sense of exasperation in the agriculture industry and these fears need to be addressed.

Indeed it does, time flies, especially in politics.  At 10am I had heard rumours circulating that the former favourite to win the Republican French primaries, Alain Juppe, may be stepping in to rescue the Republican party.  Rumours, obviously, and that was before Fillon addressed the press in his lunch time conference from his campaign headquarters in Paris.

So what did he say?

Well the conference was in French and I have listened with my vague recollection of French.  If you want to have a go at it yourself, it has been posted on his twitter feed.  Despite this morning’s rumours, Fillon has vowed to stay in the race, saying:

Fillon confirmed that he has been summoned before an investigative judge on 15th March 2017, something that is unprecedented in French politics during the presidential campaign, for the misuse of public funds in the Penelopegate scandal.  He has accused the investigation  of being a challenge to the democratic process and referred to it as an attempted ‘political assassination’.  He is probably right in this respect as the allegations go quite a long way back and could have been brought into the public sphere before now but that would have been far less effective.

Gosh, it’s all very exciting.  What next?

Only last night I went to a talk at the Chatham House Institute of International Affairs in London where Professor John Gaffney gave a lecture on the French presidential race.  (Gaffney is Co-Director of the Aston Centre for Europe, Aston University and author of ‘Political Leadership in France: From Charles de Gaulle to Nicolas Sarkozy’).  In his lecture, he specified the importance of the said agricultural fair and commented on the large numbers of followers that Marine Le Pen had managed to accumulate following her attendance.  There’s a Reuters link below that covers this.  I did e-mail Professor Gaffney this morning just after hearing the rumours that Fillon may pull out of the race as I wondered what he would think of how things had unfolded since his address last night.  Since that e-mail, events have hastily moved forward.  It is possible that Fillon’s direct approach in this this afternoon’s conference may have boosted his ratings but, I suspect, it is unlikely that they will have propelled him back into a leading position in front of Marine Le Pen (first place) and Emmanuel Macron (second place).

So we are back to square one.  Professor Gaffney last night suggested, as many journalists do, that the outcome is likely to lead to a run off between Macron and Le Pen in the final race but that Macron, he hoped, would come out on top.  An expert in French politics, Professor Gaffney said that the French political system was designed the way it was in order to keep out extremist parties.  Whilst Le Pen may succeed in the first round of votes in April, when it comes down to it in the second when there are only 2 candidates to choose from, the French electorate are unlikely to go for Le Pen; despite her attempts to soften the extremist rhetoric of her father before her.  This is indeed what happened in the French presidential elections in 2002 when Jacques Chirac and Marine Le Pens’s father were up against each other in the second round.  Chirac won and not by a small margin either; by a landslide.

The difficulties that lie ahead

Macron has no political track record as yet.  Professor Gaffney said that he had a tight rope to navigate between the left and the right.  Should he tilt either way, he may end of being accused of being one more than the other and not the independent candidate he claims to be.  One thing that Macron has not yet done is speak in a televised debate; something that the two leading candidates in the Socialist primaries, Valls and Hamon, did recently.  Should he end up in such a debate with Marine Le Pen, he will need to have had some prior lessons in how to fend her off.  Marine has been in the political game far longer than he and Macron will need to stand strong.  One thing in his favour is that he received a political boost last week when the former centrist politician, Francois Bayrou, gave him his backing.  You can read more about this here:

Macron has also gained some friends in Algeria having said that France’s occupation of it was a ‘crime against humanity’ and the LGBT community are fond of him, possibly something to do with the Russian media making accusations that Macron himself was gay, despite being married to his former teacher who is some 20 years his senior, or at least had a gay lover anyway.

The French don’t really care about lovers, gay or straight; but for poor Fillon, they do feel let down by his lack of financial disclosure and exploitation of the system for personal gain.

Le Pen only has 2 MPs and Macron actually has none.  Whichever one wins, if either one wins, they will both have to find some pretty quickly.  Neither candidate has a parliamentary majority and as such, they would have to forge an alliance with others.  In Le Pen’s case, even some of the far right of the right disagree with her proposals; particularly the ones that relate to pulling out of Europe and the euro, especially the latter.  Pulling out of the euro and returning to the French franc would be a disaster for the French economy.  The checks and balances within the French parliament are such that they would put Marine in check.  Both candidates in fact, would end up having to adopt policies that were not part of their presidential campaigns.

What will the outcome of the French Presidential elections mean for the UK in our forthcoming Brexit negotiations?

Well, it is widely known that Marine was all in favour of the UK leaving Europe and is very keen to follow suit.  Macron and Fillon are both considered to be sympathetic towards the UK and the problems that lie ahead vis a vis the legal complexities of withdrawal.  Both candidates, Professor Gaffney said last night, are savvy enough to realise that ‘putting the boot in’ and making things more difficult for the UK would not be beneficial for either side.

What about the young electorate in France? What do they think of all of this?  Young people are usually quite responsive, aren’t they?

Surprisingly, frustration levels are so high that Le Pen is nurturing support across the entire political spectrum, young people included. The French youth are far more politically engaged than the young are here in the UK but the difference, Gaffney pointed out, is that young people in the UK are far more likely to vote whilst their French counterparts do not.  France’s next generation tend to channel their frustrations elsewhere; probably whilst hanging out in coffee shops smoking Gauloise cigarettes and nursing their little French hangovers with strong black coffee.  Nothing new there then.  Last time they really spoke up for anything was in 1968 when university students en masse protested the class divisions in French society and the political bureaucracy that controlled their student funding.  In fact my dad wanted to take part in these but he was getting married to my mum that year and so his all his money was required elsewhere.

All is not last.  Gaffney brought up the 2002 French election between Chirac and Le Pen’s father (mentioned above) when people were so desperate not to let an extremist into the Elysee Palace that Chirac won by a landslide.  History could well repeat itself when French people un-slouche themselves from their copies of Le Monde (well they’re probably reading it online actually) and think, ‘merde’….  One would hope.

Marine’s riding high on the crest of the populist wave that brought Trump to power in the US.  Thankfully however, there are some differences between the US electorate and the French electorate.  Without wishing to generalise (although I am), the French, whether educated or uneducated, have always been a thinking people known to express their views and engage in political debate with their peers.

All I can say is La France, ‘En Marche’!  (Go on then, get a move on, that means.  Also it’s the name of Macron’s political movement, in case you didn’t know that already).

The following links are all post Fillon’s noon conference today:

Reuters report this morning prior to Fillon’s noon press conference:

More information on the Professor Gaffney talk at Chatham House last night.  They are supposed to be putting a video of it up on their web site at some stage but I can’t see it there yet so keep checking.

Do you think Macron is trying to mobilise the Auld Alliance (with Scotland)? I note the logo on the Scottish rugby shirts reads ‘Macron’. This way he can claim credit for the France victory over Scotland AND the the Scottish victories over Ireland and Wales. Tongue in cheek aside I enjoyed the article and agree with the analysis