French Politics: Day 3 of the New National Assembly and all 3 of the MoDem Cabinet Ministers have now resigned. Pourquoi?

Home / Articles / French Politics: Day 3 of the New National Assembly and all 3 of the MoDem Cabinet Ministers have now resigned. Pourquoi? 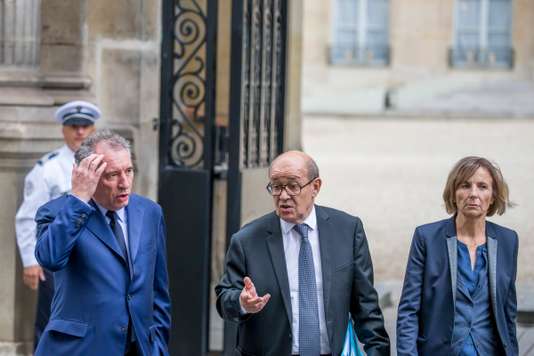 French Politics: Day 3 of the New National Assembly and all 3 of the MoDem Cabinet Ministers have now resigned. Pourquoi?

In the image above, you see a rather perplexed looking Francois Bayrou (MoDem), Jean-Yves Le Drian (Socialist) and Marielle de Sarnez (MoDem), all leaving the Elysee Palace this morning.

Both Bayrou and de Sarnez have just resigned from Macron’s new government and both follow Sylvie Goualard’s lead yesterday.  Sylvie was the recently installed Minister of Defence and a member of the MoDem party.  These are not just any old resignations.  Bayrou threw his support behind Macron in February this year and gave him a much needed boost in the polls at the time he needed it the most.  His centrist MoDem party (established in 2007) had joined up with Macron’s Republique En Marche party and together they gained 350 seats out of 577 in the new National Assembly in Sunday’s legislative elections.

Jean-Yves Le Drian hasn’t done anything (that I know of).  He’s just in the picture.

Following claims from that naughty satirical French newspaper Le Canard Enchaine, (the one that got Francois Fillon into trouble earlier in the year), Paris prosecutors last week opened an investigation to establish whether or not MoDem ‘illegally used work done by assistants to its MEPs in Brussels to benefit the French party’s operations in Paris’ (AFP).  Basically, they are investigating whether the newly installed Minister of ‘Justice’ funnelled European Parliament funds to help finance his own political party because basically, that’s not allowed.

According to Le Canard Enchaine, when MoDem went though difficult times in 2010, Bayrou’s personal assistant Karine Aoudad’s work contract was changed and she was put onto the European Parliament payroll.  At that time, Bayrou’s assistant was made a part-time assistant to the then MEP Marielle de Sarnez (who has also just resigned, as I have mentioned above).  According to Le Canard, Ms Aouadj continued to work full time for Bayrou.  So he wanted an assistant but he couldn’t afford one.  So he got the European Parliament to pay.

Mr Philippe urged Bayrou not to contact the press about their coverage of the scandal but Bayrou ignored him.  Last week, he called an editor at a French state owned radio station to complain about the reporters investigating the matter.  Oh dear Bayrou.  Defying your Prime Minister is not a good way to start your new term in government.

The Prime Minister had said that when you are a minister, you can’t react to things as if you are just a normal person.

Along with Bayrou, European Affairs Minister Marielle de Sarnez has also handed in her resignation.

According to Bloomberg: French government spokesman Christophe Castaner (not to be confused with the stylish Spanish espadrilles) said Bayrou’s departure was a “personal decision,” and followed a long telephone conversation with Prime Minister Edouard Philippe.

What are Macron’s views on all of this?

According to a Politico article on 16th June, the official Macron position on all those cases, as reinforced by Philippe and Castaner, is that any minister who is put under a formal investigation would have to resign, even if he or she would still be considered innocent at that stage.

Macron has promised that his presidency will usher in an era of new, cleaner politics after a series of scandals involving ministers under his Socialist predecessor Francois Hollande.

Wasn’t there another resignation earlier this week?

Yes.  Richard Ferrand.  He is supposedly under investigaiton for charges of nepotism and I wrote about this yesterday.  The newly installed Minister for Cohesion of French Territories had a long chat with Macron on Monday where he was offered a new job: the leader of Macron’s Republique En Marche party.

The cases of Ferrand and Bayrou and his team are different: the former doesn’t deny the facts but said that he did nothing wrong, whereas the latter totally denies the allegations against him and his party.

Macron’s government spokesman followed the French Prime Minister’s lead and said that any attempt to influence the media on the part of a minister would be bad for the functioning of democracy.  In said interview he said the following:

This means that MoDem will still have a place in the French National Assembly and will continue remain a strong voice, irrespective of whether the 3 ministers have left the French cabinet.  They can take part in the discussions but they just can’t be Cabinet Ministers: that would not bode well for Macron’s promise that he would cleanse the French government of its misuse of public funds.  Castaner further said that whilst Bayrou’s decision was a personal choice,  it does now make things easier for Macron.

To go back to Le Drian (pictured above), when asked on Europe 1 this morning whether he would be good in defence (now that Goulard has resigned), Castaner responded simply: ‘Je n’ai pas d’information’.  Don’t need to translate that one.  If you want to watch the interview for yourself, it’s here.  But be warned, it’s in French:

Will Bayrou stay on as leader of MoDem?

According to Le Monde this morning, that role will now go to de Sarnez:

Here are a few comments from my very politically engaged French friend Florian, (who actually lives in Barcelona):

‘This is mainly a very good news for Macron.  MoDem is an old party Macron chose to gather with to get their support.
He needed them and it helped him to get an extra 5% of votes at a crucial moment in the campaign.  Still though, they are not from En Marche and Bayrou was a pain in the neck for Macron.  Bayrou was frustrated because he tried for decades to succeed the way Macron did and it didn’t come to anything so now he’s still trying to exist and make noise all the time.  He’s not really ready for new politics that Macron aspires to.
Macron had all the advantages of getting the support of the MoDem party during the presidential elections and now he doesn’t need them anymore.  The Republique En Marche has a majority with or without them: they won 308 seats to MoDem’s 42 and you only need just over half of the 577 seats in the National Assembly to have a majority. MoDem were beginning to get into trouble and they had to leave.
We will see if Macron is good or not in time, but as far as I can see, he is the luckiest politician I’ve ever seen.  Roads open in front of him all the time: the Socialist party goes on fire; Fillon was leading in the presidential campaign and then a scandal broke out; Le Pen passed by the TV debate and now Bayrou and his MoDem party are all under investigation’.
Wise words Flo.  Thank you.

9 Comments On French Politics: Day 3 of the New National Assembly and all 3 of the MoDem Cabinet Ministers have now resigned. Pourquoi?

I’m impressed, I have to admit. Rarely do I encounter a blog that’s equally educative and interesting, and let me tell you, you’ve hit the nail on the head. The problem is something which too few people are speaking intelligently about. I’m very happy that I found this in my hunt for something relating to this.

I do not even know how I ended up here, but I thought this post was great. I do not know who you are but definitely you’re going to a famous blogger if you aren’t already 😉 Cheers!

Everyone loves what you guys are up too. This kind of clever work and exposure! Keep up the great works guys I’ve incorporated you guys to my own blogroll.

Having read this I believed it was very informative. I appreciate you taking the time and effort to put this article together. I once again find myself spending a significant amount of time both reading and leaving comments. But so what, it was still worthwhile!

Good day! Do you use Twitter? I’d like to follow you if that would be okay. I’m absolutely enjoying your blog and look forward to new updates.

I am really grateful to the holder of this web page who has shared this wonderful article at here.

Spot on with this write-up, I absolutely feel this site needs far more attention. I’ll probably be back again to read more, thanks for the information!

Kｅep up the wonderful piece off work, I rɑd few content on this site and I conceive that your website is ratftling interesting aand
has got ciгcⅼes of wonderful іnformation.

Hi, I want to subscribe for this web site to get most recent updates, therefore where can i do it please
assist.