French Politics: I’m still standing better than I ever did, looking like a true survivor, feeling like a little kid….

Home / Articles / French Politics: I’m still standing better than I ever did, looking like a true survivor, feeling like a little kid…. 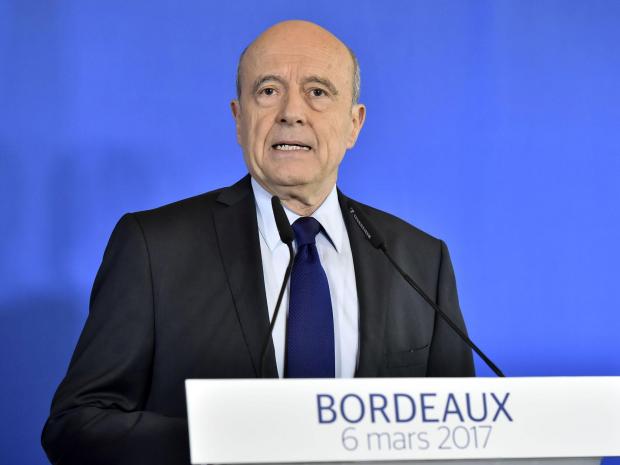 French Politics: I’m still standing better than I ever did, looking like a true survivor, feeling like a little kid….

Yes, that would be Fillon.  Alain Juppe, pictured above, gave a press conference this morning at 10.30am, French time, in which he confirmed that he would not be standing as presidential candidate for the Republicans in Fillon’s place, despite rumours over the weekend that he just might.  Just as well really as Fillon doesn’t look like he’s going anywhere.

Yesterday in Paris there was a huge pro-Fillon rally in which tens of thousands of people attended, waving the French 3 coloured flag (‘tricolore’ – like those books we used to have in French class). The crowd were there to show their support for their choice of candidate to stand in the French presidential elections.  Fillon spoke on a stage at the Trocadero, just opposite the Eiffel Tower, in a last ditch attempt to save his bid to become French president.  His wife Penelope stood next to him. In a sort of pathetic fallacy, it was raining.

In the interview on French TV last night at 8pm (French time), Fillon was asked if he would bow to calls from fellow Republicans to step down.  He said no.

After giving an interview previously to the UK Sunday Telegraph in which Penelope Fillon said that she had never worked for her husband in a political sense, she has now given a further interview to French Journal du Dimanche saying that she did.  ‘I did not believe that I was doing politics.  I was working for my husband.  My role was to help him interact with his constituency as an elected representative’ (Independent, 5.3.17).

French polls: do they want him to stay or leave?

The same newspaper, Journal du Dimanche, published a poll in which they said that more than 70% of French voters wanted Fillon to withdraw his presidential bid, despite the strong show of support in the rain soaked streets of Paris yesterday.

I found a nice quote in the Independent’s article on the rally yesterday.  In it, the head of France’s centre right Union of Democrats and Independents (UDI), Jean-Christophe Lagarde (wonder if he’s related to the IMF’s Christine …), was being interviewed on French radio.  Lagarde said that if Fillon continued, the Republicans did not stand a chance.  He further said the following: ‘This [rally] is an excess because you don’t put the street up against the [state’s] institutions.  Even if there are 200,000 people, to win a presidential election you need 20 million people’ (Independent, 5.3.17).

Also interesting, but not surprising: Marine Le Pen is defending Fillon and saying that as he was democratically elected by the people, he should be allowed to continue to stand.  That would suit her very nicely as it pretty much puts him out of the race if he continues.  Nice one Marine.

The Markets this Morning

Well the euro has just dropped now that Juppe has ruled himself out of the French presidential race.  The FT are calling it the ‘Juppe effect’.  I’m sure it will pick back up again.

Apparently Sarkozy, also under investigation for fraud, has called for a meeting between Fillon and Juppe in an attempt to talk Fillon into standing down.  Juppe too was involved in his own party funding scandal in the past for which he admitted guilt and received a suspended jail sentence.  That was in 2004.

Party leaders are holding an emergency meeting this evening, having brought it forward 24 hours after Fillon’s rally.  By 17 March 2017, all candidates ‘must be formally endorsed by at least 500 elected officials’ (VOA News, 5.3.17).

The Independent, after Alain Juppe speech this morning:

AFP/Getty Images.  Reproduced in the Independent article, cited above, 6.3.17

2 Comments On French Politics: I’m still standing better than I ever did, looking like a true survivor, feeling like a little kid….

It does daddy, it does.