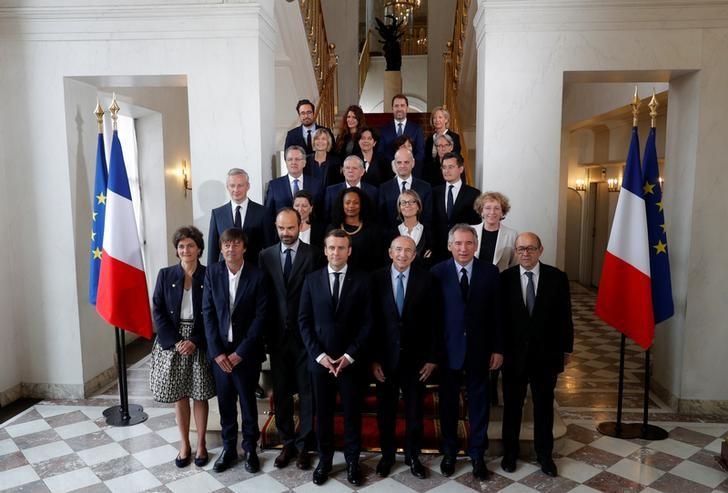 ‘Under the Macron doctrine, old parties must not just be beaten, they must be destroyed’

Macron campaigned on ‘a promise to erase the right-left political divide and needs to weaken France’s established parties … to secure a majority’ (FT, 18.5.17).

The Socialist party is already in a shambles.  That’s the first part complete.  Now to set about the dissemination of the two parties on the right: the Republicans and the UMP. Both parties came together in the presidential campaign and put forward Francois Fillon.  If Macron rips the parties of the right apart, he has more chance of ensuring that they don’t win a majority in the June legislative elections.  How to do that?  Well, firstly, why not start by making one of them your Prime Minister?  By recruiting centre-right Republican Edouard Philippe to his team, Macron hopes that others from the right will follow.  This is the first time in the history of French politics that a newly elected President has chosen a Prime Minister from the opposite political camp rather than being forced to do so by way of a cohabitation government.

If Macron’s REM (République En Marche) party fails to win a majority in the June elections; another option is that he could form a coalition made up of some centre right MPs who are not entirely happy with the way that the parties of the right have experienced a recent drift further to the right.

The Win over the Electorate Plan

Make sure that half of the people you nominate for the 577 seats in the National Assembly in June’s legislative elections are women.  Further, make sure half of them (male or female) are not working in politics already and assemble a cast and crew from the the professional sector: entrepreneurs, economists, academics, health professionals, writers and so on.

The Cabinet who work alongside Macron are not allowed to sit in the National Assembly (parliament) in addition to their role as minister: they have to choose and this is enshrined in the French constitution.

Macron has selected 18 ministers and 4 junior ministers (also known as ‘secretaries of state’).

Half of his cabinet are women and half have not previously held public office: political newcomers or political ‘neophytes’, you could say, if you want to get all Greek and academic about it.

Of those who have political experience: 4 are from the Socialist party (Le Drian and Collomb are the 2 most well known; Ferrand and Castaner are the other 2); 2 are from the Radical left party (Mezard and Giardin), 3 are from the centrist MoDem party (Bayrou, Gourd and de Sarnez) and 3 are from the Republican party, if you count the Prime Minister as one of these, (Philippe, Le Maire and Darmanin).  The rest, 11 of them, are made up of people from civil society (Guardian).

Macron’s government will be headed by Edouard Philippe.  If all goes to plan, he will win a majority in the June elections and will be able to keep his chosen government in place.  If not and the parties on there right manage to take the lead, a reshuffle will have to be effected.  But for now, here are the ministers that Mr Macron proposed yesterday at 3pm.

22 names were announced: 16 full ministers, 2 deputy ministers and 4 secretaries of state.  Only 2 of the new cabinet drawn up by Macron and his new Prime Minster were ministers in the Hollande administration just gone.

Edouard Philippe.  We already know him.  He was announced on Monday.  Political affiliation: Republican/centre-right.  You can read more about him here… http://www.makemeaware.com/french-politics-macron-nominates-un-homme-de-droite-prime-minister/

The Prime Minister is included in the 18.

Gerard Collomb, 69.  Mayor of Lyon.  Political affiliation: Socialist.  He will deal with the terrorist agenda.  The post of Interior Minister is the most senior role in the cabinet after the Prime Minister.

Sylvie Goulard, 59.  Political affiliation: Centrist MoDem MEP.  Goulard was an early supporter of Macron.  She will push for joint European military operations.  She speaks German and Italian as well as French.  Goulard is now the most senior women in the French government.

Francois Bayrou, 66.  Political affiliation: Leader of centrist MoDem party who threw his support behind Macron during the electoral campaign.  He will be in charge of pushing through Macron’s first law on ‘moralising political life’, according to the Telegraph.  That means no more Fillon-esype type scandals which involve employment family members (this is going to be outlawed under Macron) and misappropriating public funds.  Bayrou stood as presidential candidate on 3 occasions but never got it.  He also served a four year stint as education minister in a conservative government more than 20 years ago under then President Chirac and Prime Minster Alain Juppe.  (Juppe is now Mayor of Bordeaux, a position he has held since 2006).  Apparently Bayrou didn’t really do all that much during his time as education minister so it’s not really notable.  He’s more notable for throwing his support behind Macron which tilted the polls substantially more in Macron’s favour).

Bruno Le Maire, 48.  Political affiliation: member of the centre-right Republican party.  He stood as a presidential candidate in the primaries but attracted less than 3% of the Republican party vote. Le Maire was agriculture minister when Sarkozy was President.  He is pro-Europe and speaks German.  Le Maire will be given the task of restructuring the job market in France by making it more flexible and incorporating some of Macron’s much talked about labour market reforms.  The Telegraph say he will also deal with the ‘privatisation of France’s labour offices, the end of subsidised jobs and the capping of welfare benefits’.  He is said to have coveted a role in relation to the economy for several years (BBC).

Gerald Darmanin, 34.  Political affiliation: a rising star in the Republican party and mayor of northern French city Tourcoing.  He will be in charge of supervising public accounts.

Jean-Yves Le Drian, 69.  Political affiliation: Socialist.  He was the Defence Minister under Hollande and now Ms Goulard will take this role.  Drian is a senior Socialist figure and supporter of outgoing President Hollande.

Marielle de Sarnez, 66.  Friend of Bayrou.  Will be working under Le Drian (Foreign Affairs).  De Sarnez is a centrist/MoDem European expert and has been a member of the European Parliament since 1999.

Annick Girardin, 52.  Political affiliation: Socialist/member of Radical Party of the Left (which Politico, 18.5.17, describes are more centrist, but for these purposes she will come under Socialist).  Girardin is another one of Hollande’s outgoing ministers (along with Le Drian, above).

Jacques Mezard, 69.  Worked for 9 years as a member of the French Senate representing the southern rural region, Cantal.  Political affiliation: Socialist/member of Radical Party of the Left (as is Girardin above).  A strong advocate of secularism and has expressed concerns about Muslim women wearing veils and halal school meals.

Richard Ferrand, 54.  Political affiliation: Socialist.  Not one of the more well known former socialist party members.  Secretary General of En Marche and was instrumental in the Macron campaign.

Muriel Penicaud, 62.  (The BBC says 61).  Former human resources director at Danone (the ones who make yoghurt).  She also worked for French telecommunications company Orange.    She is going to have a lot of work on her hands with Macron’s proposed easing up on labour laws and will face some tough opposition from French unions.  Since 2015, she has headed the Business France agency: a public agency in charge of promoting French companies abroad and attracting foreign investment.

Nicolas Hulot, 62.  TV presenter and environmental campaigner who was involved in the 2015 Paris climate accords.  Previous administrations on the right and left (Sarkozy and Hollande) have tried to poach him for this role but he has declined.  The Telegraph call him the ‘Gallic David Attenborough’.  Macron’s appointment of Hulot should counteract any greenies who might not like that fact that his prime minister worked at the state owned nuclear plant Areva for a time as a lobbyist between 2007-2010.

This comes as a junior ministry under Hulot.  Elisabeth Borne, 56.

This role was taken by publisher Francoise Nyssen, 65.  Head of Actes Sud Publishing based in Arles and Paris.  Actes Sud was founded by her father.  She was born in Belgium and worked for the Belgian government for some years in the urban planning department before she moved to France to work in publishing.  Macron is said to be a lover of literature; not that he’ll have much time to read now.

Frederique Vidal 53.  Vidal is a biochemist.

Moonier Mahjoubi, 33.  He is the youngest person selected to work in Macron’s government.  Mahjoubi fended off hacking attacks during Macron’s presidential campaign.  His parents moved to France from Morocco in the 1970s but he is French born.  An entrepreneur, he has several start up businesses behind him.  Macron has placed the digital economy as a high priority.  He’s young so En Marche is and has been his sole political affiliation.

Spokesman in charge of Parliamentary Affairs

Christophe Castaner, 51.  Junior minister and government spokesman.  Political affiliation: former Socialist before signing up to En Marche.  Not very well known in socialist party prior to this cabinet: not in the league of socialist party big wigs Le Drian and Collomb.  He was Macron’s campaign spokesman.

Marlene Schiappa, 34.  She’s the second youngest: just behind Mahjoubi (above).  She is a writer and Macron’s En Marche party is her only political affiliation, like Mahjoubi above.

Sophie Cluzel, 56.  A newcomer to politics.  She has 4 children, one of whom has Down’s Syndrome.

Le Drian has experience in security and defence and has versed Macron on much of it.  He however has received the role of Foreign Minister.  Ms Goulard has long standing expertise in European affairs and she has been given the role of Defence Minister.  Interesting.

Both people he has chosen to look after the economy, Le Maire and Darmanin, are conservatives.  This is a signal that Macron is ‘serious about fiscal restraint’ (Politico, 4 Take Aways).  Furthermore, it is a significant message that those who chose to leave the republican party were given a big hitting role and Macron therefore considers their voice important.

Macron held his first cabinet meeting at the Elysee Palace this morning.

The Telegraph, ‘Europe at heart of Macron’s Left-Right government with gender parity and female defence minister’, 17.5.17:

The Guardian, ‘France’s Macron selects his government from left, right and centre’, 17.5.17:

Here’s an article that gives you a little slide show/photo montage of all 22 new ministers and junior ministers.  It’s in French but you only have to look at the pictures:

You may enjoy this article also from The Huffington Post yesterday, 17.5.17:

France 24 is always a good source too and they have it in English:

Who’s who in the photo?