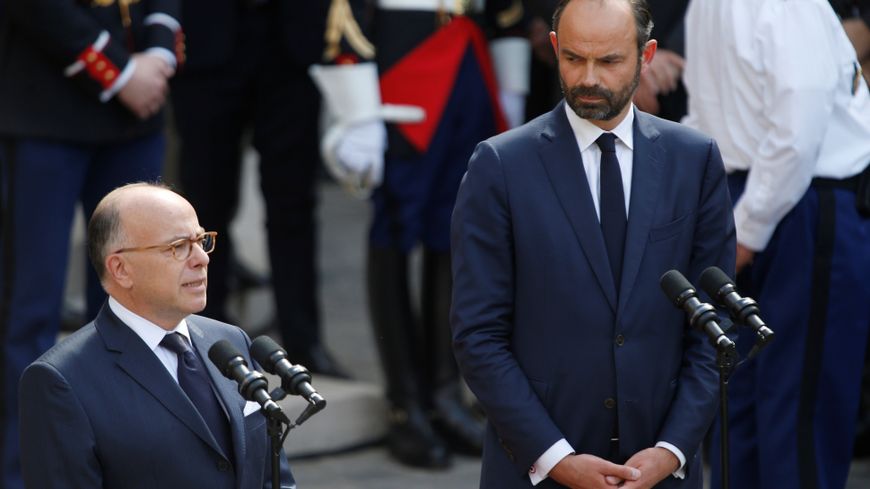 The outgoing Socialist Prime Minister under Hollande, Bernard Cazeneuve, 53, is from Normandy.  So is the new one: Edouard Philippe, 46.  Both are pictured above.  Until today, Edouard Philippe was mayor of the French port city Le Havre.  He is a close friend of former prime minister Alain Juppe.  Like Juppe, he is from the moderate wing of the main centre right party, the Republicans.

It is hoped that Philippe will act as a counterweight to those who have joined Macron’s movement from the left.  According to Reuters, it is the first time ‘in modern French political history that a president has appointed a prime minister from outside his camp without being forced to because of a defeat in parliamentary elections’ (Reuters, 15.5.17).

Philippe began his political career whilst still a student.  At that time, he campaigned for the Socialists.  Like Macron, his mentor was former prime minister Michel Rocard who died only last year (1930-2016).  Later on, Philippe turned to the right.  He is a trained lawyer and worked as a public affairs director/lobbyist for the state nuclear group Areva from 2007-2010.  In 2012 he became a member of parliament and in 2014, Mayor of Le Havre.

Philippe was part of Juppe’s campaign last year when he was tipped as favourite to run win the Republican party nomination.  After Juppe lost to Fillon, Philippe moved to Fillon’s campaign but later dropped his support when Fillon became mired in financial scandal.

Philippe’s parents are both teachers.  He spent part of his childhood in Bonn in Germany as his father was the headteacher of a French lycée there, hence his fluency in German.  Macron speaks German too.  Also like Macron, Philippe is pro-Euoprean.

The Associated French Press (AFP) describe him as: ‘sporty, multilingual and known to be an intellectual’.  The same article also says that to some, he can come across as ‘aloof’ or ‘even arrogant’ and has a tendency at times to be rather ‘brusque’.

Other interesting stuff:  he is an amateur boxer, likes cold water swimming, has written two crime thrillers and has a ‘strong interest in war-time British prime minister Winston Churchill’.  He’s supposed to be good at impersonations too and apparently does a good one of some ex-presidents, including Valery Giscard d’Estaing, Jacques Chirac and Nicolas Sarkozy: not bad for someone considered ‘aloof’.

He is married and has three children.

Why has Macron chosen someone from the right?

A wise political manoeuvre.  In choosing someone from the right, Macron may be hoping that others from the right will also jump ship to join him.  Reuters say that it’s an attempt to broaden his political appeal and weaken his opponents before the parliamentary elections in June.  If Macron wants to ‘smash the left-right divide’, he needs to pull in moderates from both parties: such an alliance should help him push through his economic and pro-business reforms (Guardian, 15.5.17).  Furthermore, despite hailing from different parties, as you can see in the precis I have given above, Macron and Philippe have much in common.

If, as some expect, the Republicans do well in June’s legislative elections, at least Macron has already selected a member of their party as Prime Minister.  This way he has chosen his own candidate rather than the candidate the Republican party may choose to put forward instead.

What will Macron do to get people from the left to join him?

No En Marche candidate was put forward in former socialist Prime Minister Manuel Valls’ constituency: Valls has already said that he is happy to leave the Socialist party to work with Macron.  One possible contender for Prime Minister had been former socialist Richard Ferrand who is also secretary general of Macron’s En Marche movement.  Macron however has decided to embrace the right on this occasion; possibly to appease those who wish to defeat him in the legislative elections in June.

What are some of the foreign press saying about Philippe?

The Washington Post seem to quite like him.  Sylvie Corbet and Geir Moulson both said earlier this afternoon that he ‘reinforced the generational shift in France’s corridors of power’.  Furthermore, he is a relative unknown, therefore fulfilling Macron’s pledge to ‘repopulate French politics with new faces’ (WP).

In Britain, some have expressed disappointment at Macron not having selected a woman for the role (BBC).

And the French politicians?

Only a few given here.

Bruno Le Maire, a Republican, congratulated Philippe on Twitter: ‘Let’s go beyond the old divides to be of use to France and the French people’ (Reuters).

Marine Le Pen sees the appointment as more of the same, an ‘alliance of the old right and left, united in their wish to remain in place at any price’. Far left Jean-Luc Melenchon’s not that keen either, apparently.  Melenchon said: ‘The right has just been annexed, with a prime minster from its ranks’ (Washington Post).

The need for speed

At yesterday’s inauguration when Hollande paved the way for Macron, it was Macron’s wife Brigitte who arrived first: mirroring Melania Trump’s choice of attire in a powder blue two piece suit.  It made me laugh that after his inauguration, on a Sunday, he raced up the stairs saying the he wanted to get started straight away.  The Washington Post have picked up on this: apparently his thank you at the end of the announcement of the new French prime minster lasted a mere 8 seconds before running off to meet Angela Merkel in Berlin. The Germans are known for their timekeeping and I dare say he wouldn’t have wanted to displease Ms Merkel on his first meeting with her as French president.  (Macron first met Merkel back in March during his campaign).

As for the rest Macron’s new government

France’s new President is expected to make a further announcement tomorrow.  Apparently there are ‘at least 24 socialists’ campaigning for reelection under Macron’s ‘REM’ or Republicans on the Move party.  He is promising a ‘blend of left and right’ in the forthcoming legislative elections (France 24).

Quick reminder of the legislative elections

These go to the polls in June with the purpose of electing 577 National Assembly lawmakers.  There will be two rounds: the first on 11th June, the second on 18th June.  Last week, according to the BBC, Macron announced a list of 428 REM candidates for the legislative elections: of those, half were women.  Again of those, 5% were MPs in the outgoing French parliament and those MPs were from the Socialist party.

AFP (Associated French Press), 15.5.17, on Philippe (this one gives a lot of the background on France’s new Prime Minster):

[…] Edouard Philippe.  We already know him.  He was announced on Monday.  Political affiliation: Republican/centre-right.  You can read more about him here… http://www.makemeaware.com/french-politics-macron-nominates-un-homme-de-droite-prime-minister/   […]