French Politics: What Macron has to do now

Home / Articles / French Politics: What Macron has to do now 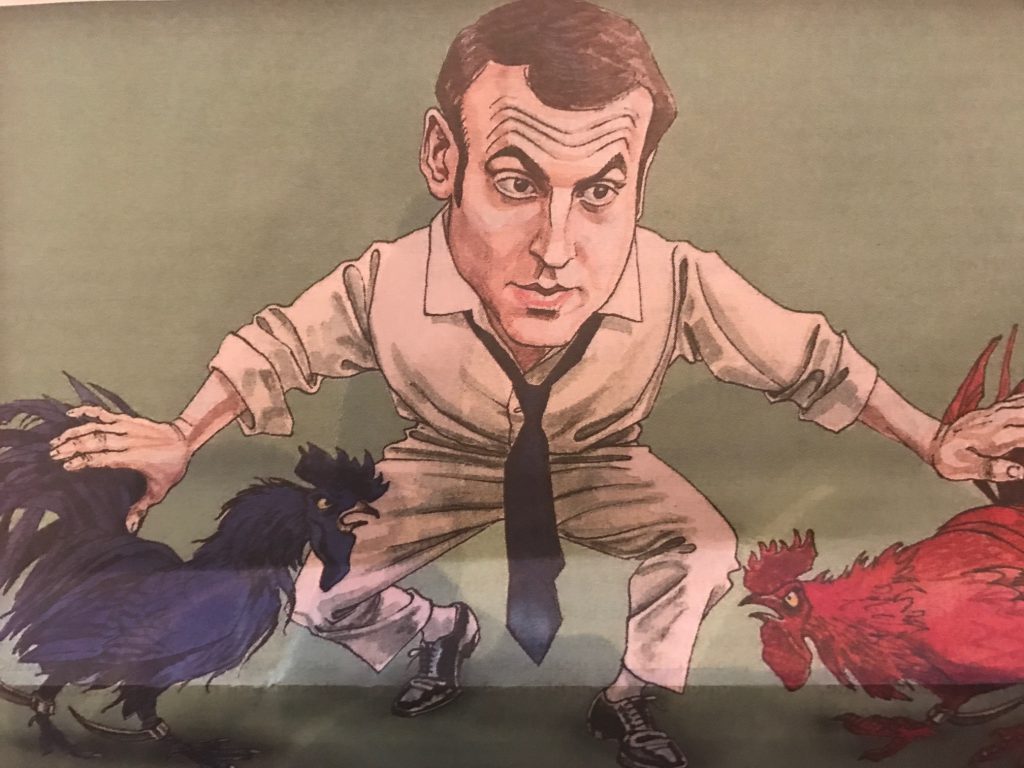 French Politics: What Macron has to do now

‘To those who have voted for me to bar the FN, I know its not a blank cheque… to those who voted for Ms Le Pen, they have expressed anger and disarray.  I will do everything so that they no longer have any reasons to vote for the extremes’.

I rather like the image above and I do hope that the FT’s James Ferguson doesn’t mind me pinching it.  It was in today’s FT – the printed version.  It was a much better option than the one I saw of someone’s bum with the French Republican party on the left butt cheek, the Socialist party on the right and Macron: slap bang in the middle and right down the crease.  Strangely I can’t find that image now: I have no idea what I typed into google.

Nearly half of those who voted for Macron on Sunday (around 43%, according to today’s FT), said that they voted for him in order to oust Le Pe.  Macron is well aware of this and you will see lower down that the FT’s Gideon Ranchman has even referred to him as the ‘Accidental President’.  Macron will also be fully aware that almost 50% of the French electorate voted for a non-mainstream extremist party in the first round; whether that be in the form of the far right National Front candidate, Marine Le Pen; or the far-left ‘La France Insoumise’ (France Unbowed) candidate, Jean-Luc Melenchon.  He is well and truly aware of the structural dynamics that face him over the coming weeks in the lead up to the legislative elections in June.

How will he address the problem of his current lack of En Marche MPs?

He is recruiting, fast.  In addition to the 50% of MPs he has promised to recruit from non-political backgrounds,  Macron also needs to pinch some of the more moderate members from the two mainstream parties and form a majority for his cross-party movement En Marche.  If it goes badly, he could end up with a National Assembly of ‘fractious coalition parties and governmental instability’ (FT, 9.5.17).  Macron also wants a lot of his MPs to be women and created a Facebook plea to that effect; a suggestion from his wife, perhaps.  We’ll be seeing more of her.  Canada’s Justin Trudeau also likes including women so the two could end up being quote good friends.

The FT says that the three defeated parties are now ‘plotting revenge in the parliamentary elections in the hope of becoming the leading opposition force to the new president’.  However, there are many French MPs from the two traditional leading parties who have said that they will work with Macron.

What does Macron want to do?

Domestic reforms will come first as he has to wait until after the German elections in September before he can do anything vis a vis economic changes in the eurozone.  Ms Merkel will not want to make any substantial moves before then.  Should Martin Schulz, the leader of the Socialist Party in Germany, become Germany’s next Chancellor come September,  Macron’s ideas may stand a better chance.  However, this is unlikely as Merkel has just beat him in Sunday’s regional elections up in Schleswig-Holstein, which is up on the border with Denmark.  No one really noticed these elections because everyone was watching Macron, as was I.

France is the second largest economy in the eurozone (after Germany).  Macron wants to engage with Germany to boost economic growth within the zone and make the European single currency work.  However, the ruling Christian Democrats in Germany, Merkel’s party, opposed every single part of his eurozone agenda.  Wolfgang Munchau in today’s FT says the following:

Well at least she met him in the lead up to the French presidential elections.  She also met Fillon and Hamon.  She didn’t meet Le Pen whose policies, her spokesperson said, had ‘nothing in common’ with her own.  Neither did Melenchon’s.  Putin met Le Pen.  I don’t know if he met Melenchon.  Probably not.

Macron has publicly praised Merkel’s refugee policies.  He has said that he would respect the 3% deficit rule and has campaigned for deeper European integration.  With his strong academic achievements, experience within the financial sector and pro-global trade outlook, he has a lot in his favour when it comes to EU negotiations.  Furthermore, the EU always place great importance on the most recently elected.  If Macron can keep to the 3% deficit rule enshrined within the European treaties and reduce some of France’s burdensome state spending, Merkel may be more inclined to listen to some of his ideas when it comes to what it takes to maintain the euro zone and make it more viable.  The 3% deficit rule is explained in one of the links in the sources below.  It was set up in order to facilitate and maintain the stability of the European Monetary Union. Under the Stability and Growth Pact (SGP), members of the eurozone are fiscally monitored to ensure that they do not go beyond the maximum budget deficit put forward by the EU.  That figure is 3%.

Macron is due to fly out to meet Angela Merkel some time next week.

He likes us but he’s not going to be soft: if we did well out of it, it would just encourage others to follow suit.  However, in saying that, he also has no interest in seeing a hard Brexit that’s going to be overly tough.  He still wants to maintain economic, defence and scientific ties with the UK, as well as mutual prosperity, according to today’s FT.  However in saying that, he has made no secret of his intent to ‘woo financial services jobs to Paris’.

‘He is the last bullet of the post war free-market, pro-EU consensus…. if he fails, one of the anti-system forces risks blowing up the system’.

Another couple of nice quotes

‘If Mr Macron succeeds, the forces of nationalism and political extremism … will suffer a setback around the world.  But if he fails, populism, nationalism and protectionism will soon be resurgent’ (Gideon Rachman, FT 9.5.17).

‘Macron’s domestic political base is [also] fragile.  he is, in some ways, an accidental president whose victory was achieved partly because the traditional centre-right and centre-left parties chose unelectable candidates, hamstrung either by extremism or by personal social scandal’ (Gideon Rachman, FT, 9.5.17).

A simple explanation of the 3% deficit rule under the Stability and Growth Pact:

James Ferguson for the FT