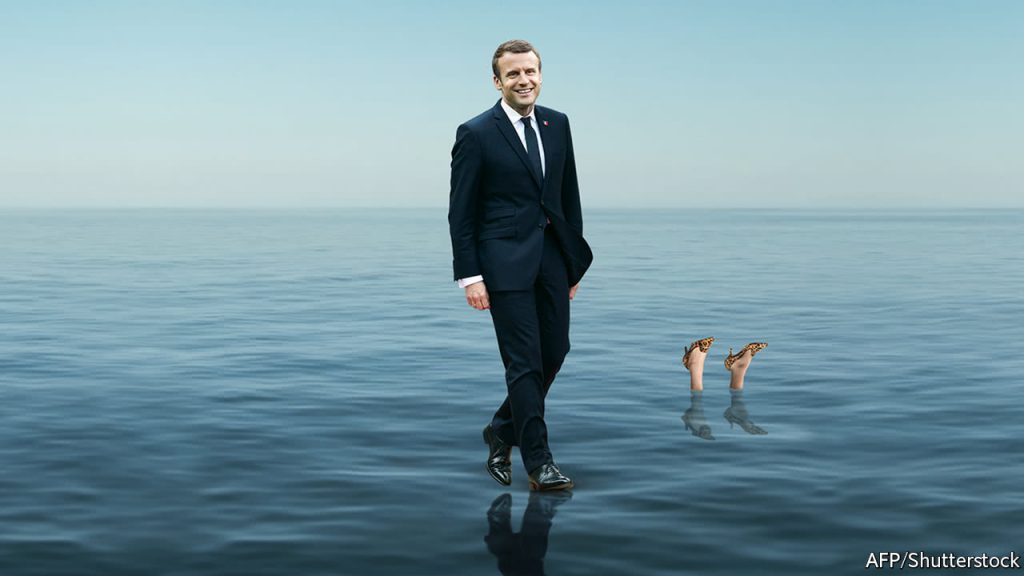 ‘The French electorate has been more extreme than any other.  It managed to eradicate virtually the entire political establishment in a short sequence of elections’.

Vox News calls him ‘President Trump’s least favourite leader’.  After Macron became France’s youngest ever President, there was talk of a coalition government in which Macron would have to team up with another party to form a government.  Not after Sunday (remember it all happens in Europe on a Sunday).  La Republique En Marche (LRM), his party, managed to get 350 seats out of 577, giving it a solid majority (Reuters).  According to Bloomberg, this is the biggest majority in 15 years, albeit there was a record low turnout.  Just to point out, let it be noted that that 350 majority also includes those from Francois Bayrou’s centrist party, Modem.  The two teamed up after Bayrou threw his support behind Macron in February.  The actual tally was LRM with 308 and Modem with 42: a total of 350 seats between the two.

What of the Republicans?

The Republicans were always expected to do well and some hoped that they might fight back after losing in the presidential race but on Sunday they only managed to come out with 130 seats: that is the Republicans, who got 112 seats, along with the Union of Democrats and Independents, who got 18.  This is according to Les Echos.  Reuters give a slightly different figure: 131.  Then when you read the Politico coverage, they say that the Republicans and their allies got 137 seats (they’re probably using the figure of 131 + the other parties of the right, who got 6).  I don’t suppose it really matters in the whole scheme of things; you get the gist.

The Socialists came third but did abysmally badly with 44 seats.  Well, they actually got 30 seats but when they joined up with their Socialist party allies, that figure became 44.  This compares with the previous Socialist led government of Francois Hollande which held 284 seats.

The leader of the Socialist party, Jean-Christophe Cambadelis, has now resigned.  He was even knocked out of his own Paris district that he held for 25 years.  According to Le Monde, he said that the left must now change everything and that he is happy to help them do that, but not as the leader of the Socialist Party.  He also said that he made his decision without anger or bitterness.

The Far Left, including Jean-Luc?

That’s Melenchon, for those of you who don’t know.  The one who surprised us all and did so well in the first round of the presidential campaign.  His party teamed up with the French communist party and got 27 seats.  His party alone got 17 seats.  This means that they had enough to form a parliamentary group (which requires 15).  Melenchon will now get a seat in the National Assembly for the first time.

Marine, Marine, did you acheive your dream?

Marine Le Pen who came second in the presidential race managed to get 8 seats with her National Front party.  8 seats is not enough to form a parliamentary group but she still gets to sit in the National Assembly, something she didn’t have before.  If you become a parliamentary group, you get speaking time and additional resources, according to the FT.  Ms Le Pen also succeeded in being elected as an MP for the first time in her home district in Northern France.

Was there a high turnout?

No.  42% apparently. This is the lowest turnout in the history of the 5th Republic which was established by Charles du Gaulle in 1958.  It has been suggested that the small turnout is more of a ‘wait and see’ attitude adopted by the French electorate rather than a general dislike of him.  Macron himself has said that you can’t judge this as a success; the success will be dependent on what he manages to achieve in the next 5 years.  Macron is from the educated elite and he will have to win over the less educated, blue collar workers and those on a lower income, according to Policito’s article ‘4 Takeaways from the French Elections’.  Many of these voters defected to the hard right and hard left in the presidential elections.

‘France is back’, said he, in the Vox news article.  A few other things he has said area as follows:

Basically this means that he followed Macron’s instructions in forming a new government so that it was more representative of France as a whole: people from the right, the left, the centre; people who had no previous political experience.

Nice one Philippe, you don’t see an orchestra with all the same instruments.  This much is true.  You get a much better sound when they are all different.  The following diagram from Associated French Press gives you an insight into all the different backgrounds of the new French MPs: 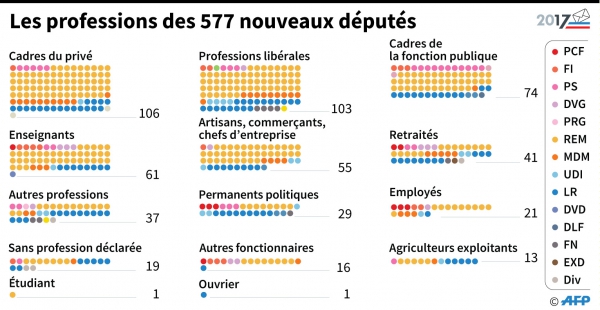 AFP: Professions of the newly elected MPs to the French National Assembly

Whilst other groups within the National Assembly will be able to play their part, they won’t be able to block legislation going through so things will happen faster.  Macron’s spokesman Christophe Castaner said that the real victory will be in five years when they have been able to change things.  First on the agenda will be Macron’s promised labour reforms that will make it easier for employers to take people on.  Basically it will, according to the FT, give employers ‘more freedom to negotiate working hours, overtime and wages with employees rather than complying with sector based rules’.  The unions will be against this (and Melenchon, for one), but many are for it.  Dieter Kempf, German President of the B20 (affiliated with the G20), is behind Macron in this regard. He supports Macron’s proposed reforms for France and the EU and sees the future French-German alliance as an important factor in making the EU stronger (FT).

Macron had insisted in his campaign that at least half of his party’s candidates in the parliamentary election would not have worked in politics before.  Sunday’s election has seen a record high number of women entering the French National Assembly: 223 versus a previous high of 155, according to Reuters.  Politico has said that the New Assembly has a lot more women, more young people and generally less experience overall.  This does not necessarily have to be a bad thing as it is now, to use the Prime Minister’s analogy, a more varied orchestra.  They might have to learn the new skills of politics but that also means that they will have been involved in less political back handers and Macron did promise to crack down on this.

Here are some little useful diagrams for you from Les Echos: 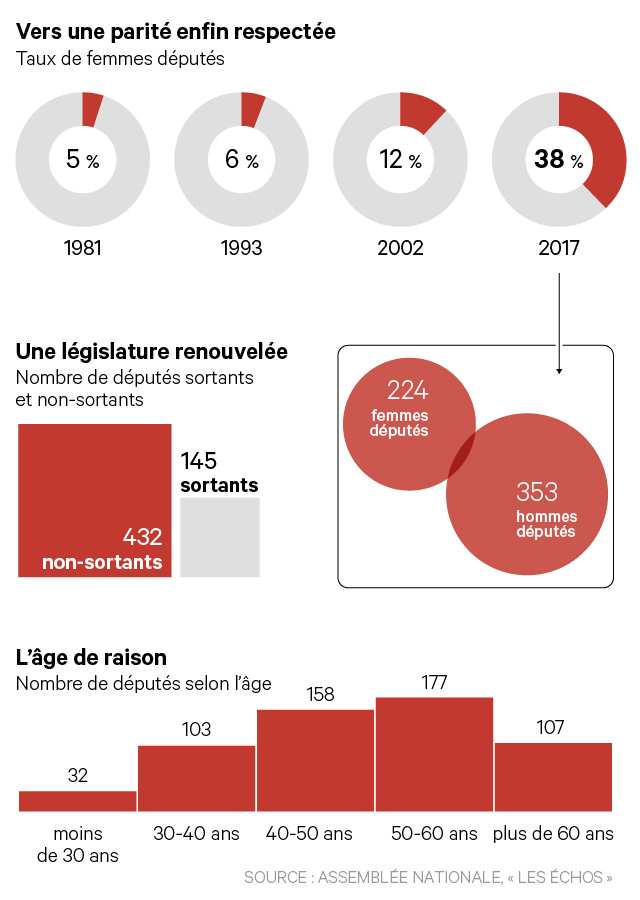 Les Echos: This diagram illustrates the new gender balance and the average age of the new MPs 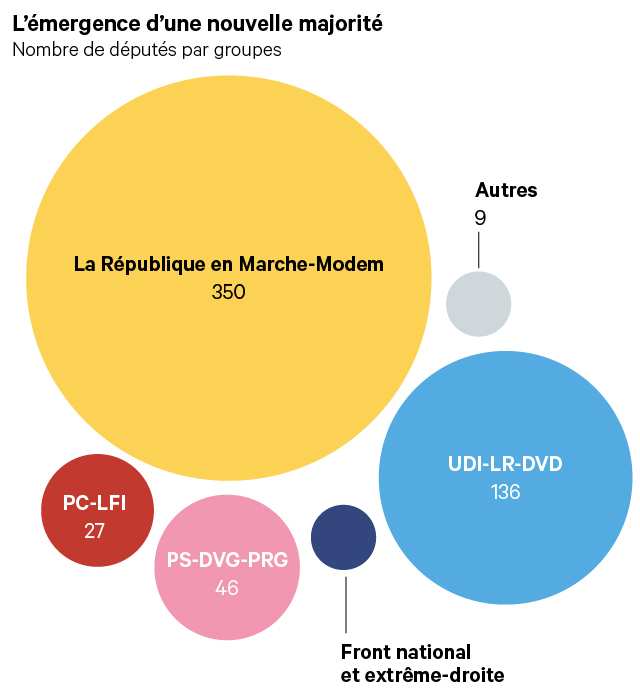 Les Echos: This colour coded chart shows very clearly how successful Macron has been – his representatives, along with those from Modem, are illustrated in yellow

On Monday, Macron appointed Richard Ferrand to be the leader of the Repulique En Marche party, which means that he has had to step down from the post of minister for Cohesion of Regions that he was given shortly after Macron was appointed as President.  Ferrand is being investigated for allegations of nepotism (more in the Politico articles below) but has said that everything he did was ‘legal, public and transparent’ and Macron is standing by him.

The newly appointed Minister of the Armed Services, Sylvie Goulard from Bayrou’s centrist party, has resigned.  She, apparently, is under investigation for using European Parliament employees to work for the Modem party in France.

Another newly appointed Minister is also under investigation: Marielle de Sarnez.  Macron appointed her Minister for European Affairs in May.  She has not resigned nor has she, at the time of writing, responded to any of the allegations against her.

I came across an interesting observation in today’s FT from a lecturer at the prestigious Sciences Po university in Paris, Jean Garrigues, who I am now following on Twitter.  The FT says that he finds ‘similarities between the election of Mr Macron and 1926, when former head of state Raymond Poincare was recalled to form a national unity government to tackle economic crisis’.  He also drew another parallel between today and 1945, when ‘Charles de Gaulle sought to rebuild France’s institutions after the German occupation, laying the groundwork for three decades of growth’.  And lastly he said: ‘Never has France’s political class been more productive then during these periods’.

Well, we shall wait and see.

You can see a graphic of the final results here and I have also provided an alternative one from Les Echos  further down.  This one is from Reuters:

Bloomberg 19.6.17.  This article details some of the new members of the French National Assembly:

Ferrand under investigation for nepotism but says it was all ‘legal, public and transparent’, 1.6.17: http://www.politico.eu/article/french-prosecutor-to-probe-minister-richard-ferrand-over-nepotism/

The legislative results from Les Echos.  This article also looks at the economic losses suffered by the political parties as a result of their loss:

Here are the actual results that they produce , just in case you can’t or don’t want to log onto the article:

Other useful articles from Les Echos.  There will be a limited number of articles you can access per month if you are not registered with them:

Ferrand quits National Assembly (because Macron has asked him to be leader of the Republique En Marche party and you can’t do both), 19.6.17:

A record number of women in France’s new National Assembly, 19.6.17:

And the G20 (from the same source, different page):

Taken from the Economist article above

The Professions from AFP: