General Election 2019: The pain in Spain falls mainly on the right

Home / Articles / General Election 2019: The pain in Spain falls mainly on the right

General Election 2019: The pain in Spain falls mainly on the right

Spain’s voters went to the polls on Sunday 28 April. Despite the fact that this was the third general election in four years, people seemed to be interested in this election. Turnout (the proportion of people who voted in the election) was 75.8 per cent, which is the highest it has been since 1996. Participation in voting was up nearly 10 per cent since the last election in 2016.

The background to the election was a turbulent recent period in Spanish politics. In the past two main parties – PSOE to the left and PP to the right – have dominated national politics. They have been able either to win majorities or get close enough to form governments with the support of parties who draw support from particular regions of Spain. This changed in the 2010s with the rise of two new political movements – Podemos, a left wing anti-austerity party, and Ciudadanos (CS), a centrist party. These parties had a big impact in 2015. Both main parties suffered heavy losses in votes and seats. As a result it has become more difficult to form stable governments in Spain. Governments have needed to bid for support from these new parties as well as the more traditional smaller parties.

The scene has also changed for the smaller parties. Nationalism in Catalonia has become more radical and in 2017 the regional government called a referendum on full independence. The referendum was not allowed under the Spanish constitution and did not have the status of an official vote, although the result was for independence. The ‘suppression’ of the nationalist regional government, and resentment elsewhere in Spain over Catalonia’s demands, have made a traditional division in politics – whether to centralise power or let distinctive regions like Catalonia and the Basque Country go their own way – more acute.

After the 2015 election, the conservative (PP) Prime Minister Mariano Rajoy remained in power running a minority government, and this was not changed by the election in 2016. However, in 2018 the opposition socialists (PSOE) and the smaller parties in parliament united to defeat the Rajoy government in a vote of confidence. The government had become discredited by corruption scandals. However, the new government under Pedro Sanchez was fragile because it was nowhere near a parliamentary majority of its own, and the PP controlled the Senate. The socialists lost a budget vote in February 2019 and as a result called an election.

The election campaign was impassioned and sometimes bitter. A new element in 2019 was the arrival of a party, Vox, that stood on the far right and rose in prominence when it gained seats in the regional election in Andalusia in December 2018. The government that was formed in the region was a coalition of the PP and Ciudadanos with a support agreement with Vox. The socialists argued that this was a bad precedent and that voting for the conservatives risked giving the far right a foothold in power. This is a sensitive issue in Spain because of the legacy of the fascist dictatorship that ruled the country from 1939 until the death of its leader General Franco in 1975. The conservative parties argued in turn that the national government had to take a firm line against separatist parties such as the one that had led Catalonia into chaos in 2017, and that the socialists were risking the break-up of Spain. This is a sensitive issue in Spain; many people feel patriotic about the need for national unity and avoiding parts of the country splitting away. There were also the usual issues of managing the economy, the personalities of the party leaders and the corruption scandal that had brought down the PP government in 2018.

Spain uses a form of Proportional Representation for elections to the Chamber of Deputies, the main (lower) house that decides who forms the government. Elections for the Senate take place under a different electoral law that gives more of an advantage to the larger parties and over-represents rural areas. Academic Roger Darlington gives a short guide to the Spanish political system here.

The election was a clear victory for the socialists under Prime Minister Pedro Sanchez – pictured at the top of this article welcoming the result. The PSOE went up from 85 seats to 123 in the lower house – still well short of a majority (176 seats) but enough to make the formation of a government not led by the PSOE completely impossible. There was a swing in Catalonia from the radical nationalists to left wing nationalists. The PSOE also won a big victory in the Senate elections, going up from 43 seats to 121. The second chamber will not be an obstacle to a renewed Sanchez government. 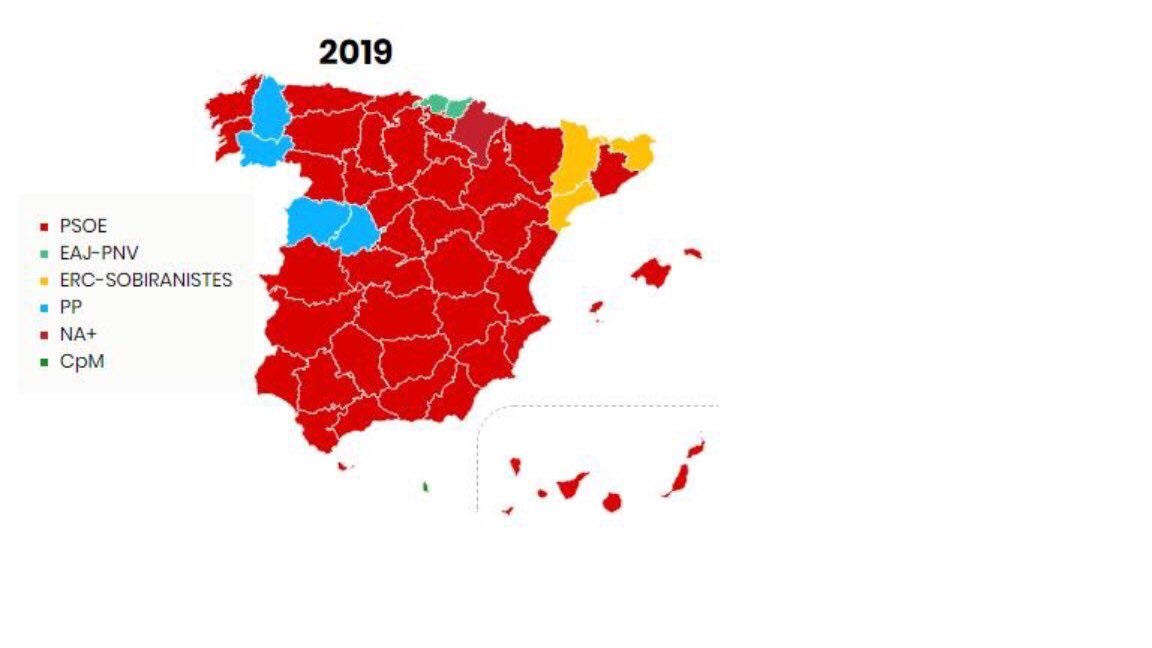 The main losers were the PP, which had been the largest party in every election since 1996 with the exception of 2004. They fell from 137 seats in 2016 to 66 seats in 2019, the worst result in their history. The party was caught between the far right (Vox won 10 per cent of the vote and 24 seats) and the centre (Ciudadanos gained seats, up from 32 to 57). By endorsing populist right-wing themes they gave legitimacy to Vox while alienating voters in the centre. They suffered from the legacy of the corruption scandal and their new leader Pablo Casado struggled to establish himself. This rise of Vox also encouraged the high turnout because it scared left wing voters who had not been keen to go and vote in the last couple of elections.

The PP has lost its position of unchallenged leadership on the centre-right, with Ciudadanos only a little behind them in seats (66 PP, 57 CS). The traditionalist right wing of its support has broken away to vote for Vox. It will be difficult to satisfy the lost right and the lost centre, unless the socialist government performs very badly. The path back to power looks a very steep one for Spain’s conservatives, only a year after they lost office.

The election gives Sanchez a mandate to form a government but the numbers are still a little tight. In theory the socialists and Ciudadanos could form a majority coalition but this is unlikely. The liberal centre-right party was very critical of the socialists during the election campaign and the idea of a coalition has been rejected by both parties. The socialists are within reach of a viable government should negotiations with Podemos (42 seats) and the smaller non-radical nationalist and regional parties go well, provided that all of the pro-independence nationalists do not join with the right wing parties to bring down the government. It would be much too early to say that Spain’s long post-2015 political crisis is over as a result of this election.

Comment On General Election 2019: The pain in Spain falls mainly on the right

Thank you for a balanced view of the results, unlike the reporting by the BBC which featured largely the likely disatisfaction of conservative voters