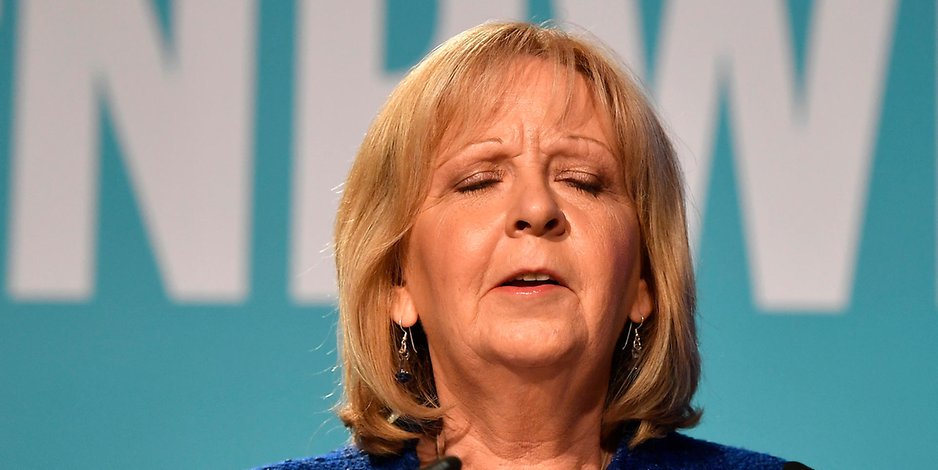 Merkel’s CDU party has done it again.  Yesterday in the most important regional elections in Germany this year, her party ousted the incumbent Social Democrat/Green party coalition in Germany’s most populous region: North Rhine-Westphalia.  One fifth of Germany’s population lives in this area.  Merkel’s CDU party took 33% of the vote, up on the 26% they took in the regional elections in 2012.  Martin Schulz’s Social Democrat Party took slightly less with 31% (they took 39% in 2012).  So despite talks early this year that Schulz could reform the Social Democratic party in Germany, this is not happening. So far this year he has lost all 3 regional elections; firstly the small Saarland region in the west on 26th March; secondly Schleswig-Holstein in the north on 7th May and now North Rhine-Westphalia.  A surprise defeat.

Hannelore Kraft, the SPD minister president of North Rhine-Westphalia (pictured above), was once tipped as a challenger to Merkel for the role of German Chancellor.  She resigned within half an hour of polls closing.

Turmout was higher than last year’s regional elections in the same area: 65.5%.

Why have they done so well?

The local SPD led government have been criticised for lack of attention in the following areas: (1) failure to fight crime; (2) failure to improve education; (3) failure to renew an ageing road work; and (4) failure to revive the economy.

The FT say that Merkel, who is seen as ‘Europe’s stability anchor’, has seen a recent surge in support while Germany’s ‘Bild’ newspaper have called it ‘The Schulz Curse’.  The once called ‘Schulz Effect’, (the return of Martin Schulz from the European parliament in January 2017 to lead the SPD which resulted in a huge boost to the party), now seems to be on the wane.  At one point earlier in the year, polls indicated that they were neck and neck with the CDU.

The SPD were expected to do well.  Not only is it their traditional heartland, much as the north of England is to the Labour Party in the UK, but it is also Schulz’s home state (The Conversation).

The Social Democrats have ruled NRW for 46 of the last 51 years. The CDU has only been in charge for five years during that time: 2005-2010.  In the May 2005 election, the CDU managed to unseat the SPD, prompting a snap federal election that the conservatives won. That same 2005 federal election granted Merkel her first term as Chancellor (Deutsche Welle).

The threshold to enter the regional government is 5%.

Who will be the region’s new leader?

Whilst Kraft is said to have outshone Armin Laschet, her CDU challenger, she could not overcome the advantage the CDU drew from having Merkel at its helm.  In addition to having served as the minister president for North Rhine-Westphalia, Kraft also served as vice chair of the SPD.

The winner, Mr Laschet, placed heavy focus on crime in his campaign and was no doubt assisted by Merkel’s recent visits to the region.  Merkel also laid into the SPD’s lax approach when it came to crime in her final appearances on Latchet’s campaign trail.

The CDU now has two possible options in forming a ruling local coalition: a ‘Grand Coalition’ with the SPD (like the one they have at national level in Berlin with Merkel as Chancellor and Schulz has Deputy Chancellor); or one with the liberal Free Democrats, a traditional centre-right ally.  With the German system of politics, the leading party doesn’t automatically become the leading government in the Landtag.  The CDU could well decide to form a federal coalition with the FDP and the Greens, as opposed to the second largest party, the SPD.  Should this happen, the SPD will become the opposition and North Rhine-Westphalia will experience a gradual shift to the right which, Wolfgang Munchau of the FT suggests, would mean: ‘continued fiscal discipline, no softening on Germany’s hard line on eurozone reform, and less readiness to engage with Mr Macron’.  Macron has flown out to Germany to meet Merkel today (Monday 15th May 2017).

My good friend and colleague, Roger Darlington, tells us a bit more about Germany’s regional governments:

‘Each Land has a unicameral assembly or parliament called the Landtag. The election period in the various Länder is generally four to five years and the dates of elections vary from state to state.

What are Germany’s regional governments responsible for?

According to The Economist, ‘everything from schools and motorways to crime and some welfare provision’.  North Rhine-Westphalia has one of the highest crime rates in Germany.  In addition to this, they have the highest rate of unemployment in Germany outside former East German communist states.  Traffic congestion on roads is a major problem.  It was in this region that hundreds of women were sexually assaulted outside Cologne cathedral on New Year’s Eve, 2015.  Furthermore, the Berlin truck attacker, Anis Amri, is also said to have ‘slipped through gaps in the asylum system’ in North Rhine-Westphalia (The Economist).

The politician to watch

Politico EU suggest we keep an eye on the 38 year old leader of the FDP, Christian Lindner.  The FDP came in third in yesterday’s elections.  There’s a link from Deutsche Welle below that gives you more insight.

Merkel is the longest-serving chancellor in Germany and the longest-serving country leader in post-war Europe and if the results of the recent local elections are anything to go by, she is in good stead to serve as Chancellor for a fourth term.  Wolfgang Munchau of the FT says the following: ‘There are still four months to go until the federal elections … but it would now take a miracle for the SPD to turn this around’.

And the Guardian earlier today:

Deutsche Welle, 14.5.17, on the CDU party’s surprise win in NRW.  Also gives a breakdown of the results:

Deutsche Welle also give a good timeline for German elections: the ones past (the regional elections) and the ones yet to come:

Deutsche Welle, ‘what you need to know about Germany’s liberals the Free Democratic Party:

The Economist, 14.5.17, ‘The Schulz Effect RIP: Triumph for Angela Merkel in Germany’s most populous state’:

12 Comments On German Politics: Merkel’s CDU party strikes at the heartland of SPD territory in Germany’s most populous state

Thank you, a good resumé

Hi there, just wanted to say, I liked this article. It was inspiring. Keep on posting!

Magnificent goods from you, man. I’ve understand your stuff previous to and you’re just too excellent. I actually like what you have acquired here, really like what you’re saying and the way in which you say it. You make it entertaining and you still care for to keep it smart. I cant wait to read much more from you. This is really a tremendous website.

An outstanding share! I’ve just forwarded this onto a coworker who had been conducting a little homework on this. And he in fact ordered me dinner simply because I discovered it for him… lol. So allow me to reword this…. Thanks for the meal!! But yeah, thanks for spending the time to discuss this issue here on your web site.

Hi there, just became alert to your blog through Google, and found that it’s really informative. I’m gonna watch out for brussels. I’ll be grateful if you continue this in future. A lot of people will be benefited from your writing. Cheers!

Hi it’s me, I am also visiting this web page daily, this web page is in fact good and the visitors are truly sharing fastidious thoughts.

Excellent web site you’ve got here.. It’s hard to find quality writing like yours these days. I seriously appreciate people like you! Take care!!

Great article. I will be experiencing many of these issues as well..

We are a group of volunteers and opening a new scheme in our community. Your website provided us with valuable information to work on. You’ve done a formidable job and our whole community will be grateful to you.

Hey! This post couldn’t be written any better! Reading this post reminds me of my good old room mate! He always kept talking about this. I will forward this write-up to him. Pretty sure he will have a good read. Thanks for sharing!

I really love your website.. Very nice colors & theme. Did you create this amazing site yourself? Please reply back as I’m attempting to create my very own website and would like to learn where you got this from or just what the theme is named. Appreciate it!

Fastidious answers in return of this difficulty with solid arguments and describing the whole thing about that.