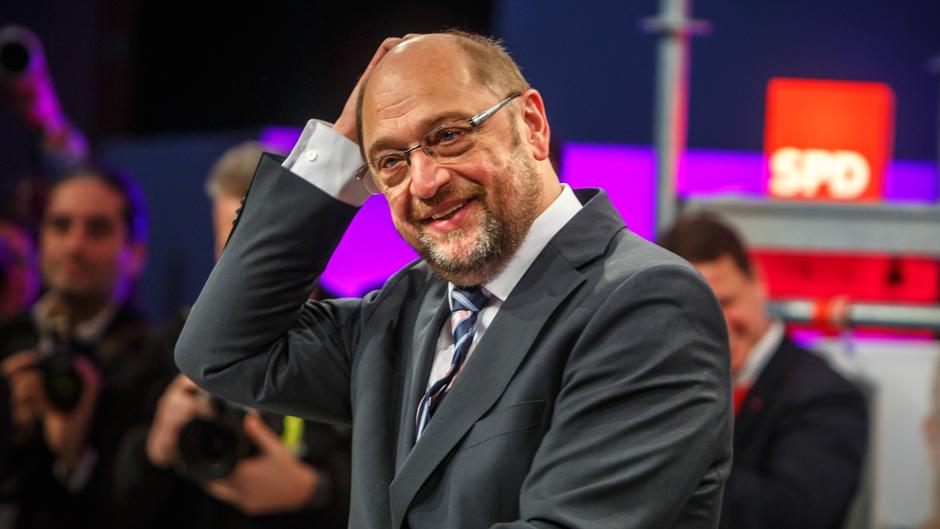 On Monday, Germany’s new SPD leader Martin Schulz gave a speech in Bielefeld, Germany.  It’s one of Germany’s 20 biggest towns; south-west of Hanover and on the German map is located over to the left, if you’re geographically challenged, on the Netherlands, Belgium, Luxembourg side.  Schulz grew up on this border and it’s why he’s so good with languages.  Monday was one of his first campaign rallies since the SPD took him on as party leader, saying they wanted him to run against Merkel for Chancellor this autumn.

Briefly speaking, in his address he placed great importance on the need for the SPD to pay more heed to the working class electorate and trade unions; a recognition of the need to revert back to the party’s original left leaning origins.  He expressed concern that whilst Germany has done well economically over the past few years, that has come at the expense of many.  He shone the spotlight on the growing levels of inequality in Germany and decreasing social mobility.  Schulz drew attention to the fact that whilst unemployment has decreased, the number of badly paid jobs and fixed term contracts have increased.  For him, social justice has been placed far too low on the agenda in recent years, having been seen as obstacles to economic growth.  Workers’ rights seem to have fallen off the precipice.

Schulz highlighted the largely international agenda of present day CDU/CSU Chancellor, Angela Merkel and that as a result, many people have felt ignored and/or betrayed.  It cannot be denied that his words will have fallen on many a fertile ear.

Schulz talked of the need of Agenda 2010 reforms.  Can you explain a bit more?

The above was an overhaul of the German labour market system and welfare system that was brought into being by previous Chancellor and SPD leader, Gerhard Schroder.  Whilst it did help Germany to recover economically, it has nonetheless opened up greater divisions in German society and Schulz wants to scrap some of the labour reforms that Shroder brought in.

Agenda 2010 brought cuts to pensions and unemployment benefits.  Before 2010, workers could get benefits for up to 32 months after losing their job.  After that, the maximum period of benefits they were entitled to became 2 years.

Have their been any changes since Agenda 2010 was introduced?

Some, not many.  A minimum wage has been introduced along with the right to retire at 63 after being in employment for 45 years.

What are his chances of succeeding come November?

Since Schulz took over as SPD leader, ratings have put them ahead of Merkel’s CDU/CSU conservatives for the first time in over a decade.

And what are Angela Merkel’s chances?

Her campaigning hasn’t really started as yet.  At the end of this month, Merkel’s campaign office will be taking over the entire second floor of the Konrad Adenauer Haus building , the CDU headquarters in Berlin.  Merkel and the leader of the CSU, Horst Seehofer, will present their joint manifesto shortly after the G20 summit in Hamburg on 7th and 8th July this year.

It is likely that they will focus on the differences between the CDU/CSU and the SPD.  Issues such as tax, pensions, the economy, digitalisation, security and of course, migration and free movement, will be at the forefront.

Angela will no doubt want to build her platform on the need to preserve Germany’s economic strength.  To many, Schulz’s ideas come as a breath of fresh air and it is without doubt that Merkel is going to have a fight on her hands.

Whilst Schulz has placed his focus on the social agenda and inequality, it cannot be ignored that unemployment has decreased while Merkel has been in power.  I came across a nice quote by CDU/CSU lawmaker, Patrick Schneider: ‘Social justice means ensuring people have work’.  You can’t really argue with that.

Should you need any more information on some of the names I’ve mentioned within this article, I’ve done a brief summary of those people in a separate article:

On Schulz prior to Monday’s talk:

3 Comments On German Politics: SPD Leader Martin Schulz indicates a return to the left at party speech on Monday

Thank you, have been way behind the curve on the coming German elections. This sounds interesting. The CSU tend to drag the coalition towards the right but the poles may exert pressure to move left. Let the ganes begin