Grenfell Tower: The Number of homeless people rises as residents from Chalcots Estate are evicted over the weekend

Home / Articles / Grenfell Tower: The Number of homeless people rises as residents from Chalcots Estate are evicted over the weekend 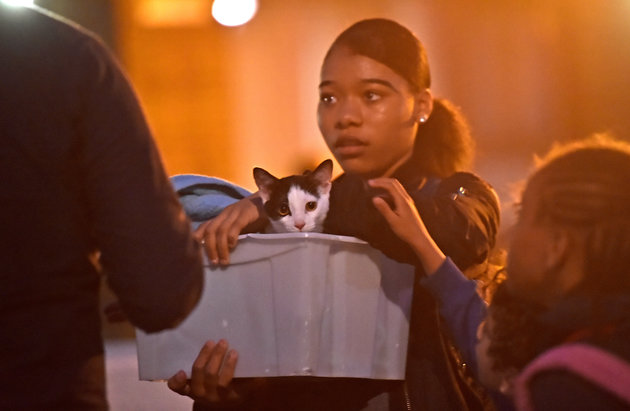 Grenfell Tower: The Number of homeless people rises as residents from Chalcots Estate are evicted over the weekend

In the image above, a resident and a cat are evacuated from the Taplow Tower residential block as a precautionary measure following concerns over the type of cladding used on the outside of the building on the Chalcots Estate in Camden, 23rd June 2017

There are now 60 tower blocks in 25 different council areas that have failed emergency fire tests.  Sajid Javid, Secretary of State for Communities and Local Government, has urged local authorities and housing associations to continue to submit samples as a matter of urgency as the nationwide fire safety check investigations continue.

Last Friday in Camden, the cladding started to be removed once it was established that it did not meet fire safety standards.  One resident told the Huffington Post that only when the cladding has been removed and not until then, would he be able to sleep.  Another resident, a 38 year old mother of 6, said last Friday:

‘If there was to be a fire, I wouldn’t be able to get out of my house.  There’s no fire alarm, there’s no sprinklers – there’s nothing to alert us… I feel scared for my kids.  I don’t feel safe.  I haven’t felt safe for years.  We’ve got one exit and that’s the stairwell.  Imagine if all of us came down one stairwell, with kids and people who are disabled … how are they going to get out?  You’ve got elderly people up there … There’s an old guy up there on the top floor, how’s he getting out?  He’s deaf in both ears, how is he going to know anything?’

I have to say that I agree.  Despite the low chances of a fire breaking out so soon after this one, I too would be petrified. Particularly if I had kids.  I would literally be a walking zombie right now for the lack of sleep.  The sole fact of the cladding does not concern me greatly but the lack of sprinklers and fire alarms and the single staircase to get out does.  These facts combined are a disaster.

Camden Council are considering legal action against the contractor who fitted it.  Roydon, the same company that renovated Grenfell Tower last year, were also responsible for the cladding at the Chalcots Estate.

Over the weekend, residents from the 5 towers at Chalcots Estate were evacuated

I wrote this article last week and did not have the time to publish it.  Over the weekend you will have seen the evacuations on the news yourselves.  Many of the residents of the Chalcots Estate have had to sleep at a nearby leisure centre as the council struggled to find enough hotel rooms to put them all up.  The towers in Chalcots Estate had additional fire safety issues such as problems with the gas piping which, when combined with the flammable cladding, meant they were no longer safe to live in.

According to the Independent yesterday, some 200 residents have refused to leave saying that they are in no more danger than they were before and in fact, with the 24/7 surveillance now, are less so.  Many said they did not want to sleep on airbeds just a few hundred feet from their own homes and were prepared to leave but only when suitable accommodation was offered.  At least with fewer numbers remaining, should there be a fire, there will be less trouble getting down the stairwell.  I would imagine that all of those with young children have now left and can’t imagine how they will all be coping getting their children to school.

One resident said that he had spent the night in their car  with his 16 month old baby and two sons, aged six and seven.

‘We are losing our lives. We work here, my children go to different schools here. I couldn’t go to the centre with my baby, so on the first night we had to sleep in the car. They’ve offered me accommodation but it’s in Whitechapel, it’s too far away for my work and schools’.

Here are some images for you for the weekend: 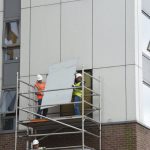 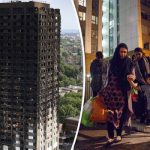 On the left, the aftermath of the Grenfell fire; on the right, Chaclots Estate evacuation by way of a precaution, Grejeen News 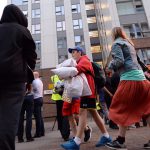 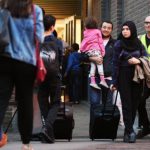 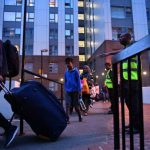 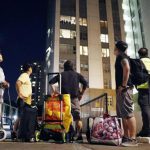 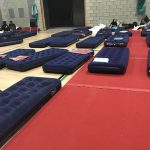 Stormzy at Glastonbury this weekend voices support for the Grenfell victims, ITV news 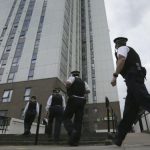 Round the clock protection at the Chalcots Estate, The Independent

Tests on the cladding on the Chalcot Estate show that it is not quite the same as the cladding fitted on the Grenfell Building, although there are similarities

According to the article in the Huffington Post last week,  the cladding at the Chalcot Estate ‘includes fire-resistant rock wool insulation designed to prevent the spread of fire and fire resistant sealant between floors’.  Still however, it is being removed.  Camden Council have reported that the cladding did manage to contain a fire at one of the blocks on the estate back in 2012.  Yes despite this, the cladding panels were made up of aluminium panels with that same polyethylene core and were, according to the Council, ‘not to the standard that we had commissioned’ (Huffington Post).

There are 5 tower blocks on the Chalcots Estate in Camden and the cladding will be removed from all. In the meantime, the Council have said that round the clock ‘safety checks and corridor sweeps’ will be carried out to ensure that they are ‘free of obstructions and anything potentially flammable’.  White goods in all the individual flats will also be tested as the Grenfell fire as police reports now confirm that the fire at Grenfell was started by a faulty fridge.  The Council will also assess fire doors and brief residents on up to date safety advice in the event of a fire.

It’s not just the older flats either…

Flats in Tottenham (the Rivers Apartments) and Barnet have also been found to have combustible cladding on them.  Regarding the Tottenham flats, the BBC has the following to say:

‘The Rivers Apartments – which is shared ownership, so classed as social housing – was built just two years ago, with the cladding incorporated as part of the design.  It is understood the block is clad in Reynobond PE, the same brand of cladding believed to have been used on Grenfell Tower… Unlike Grenfell Tower, this block does contain modern safety features – such as a sprinkler system.  Newlon Housing Trust, the housing association that part owns the block, said it has arranged with the fire service to carry out more checks.  It is still waiting for final test results to confirm it is the most flammable type of cladding.  It says the cladding on the building may have to be replaced’.

The cost of removing cladding from buildings across the country could run into hundreds of millions of pounds, according to one fire safety expert who spoke with BBC Radio 5 Live and is quoted in the Huffington Post.  One chartered surveyor who is a member of the Association for Specialist Fire Protection, was also on the programme:

‘Problems with cladding and problems with properties doesn’t just affect social housing.  It goes across the whole range of properties.  There could be office blocks clad with it’.

The Holiday Inn in Kensington has had to ask 30 families to leave due to ‘existing bookings’ they have said, according to The Guardian on Saturday.  The families were sent a letter from Kensington and Chelsea council saying that they needed to urgently leave their rooms by 4pm on Friday.  The people concerned were staying in 20 rooms at the Kensington hotel and the council said those who had to leave had been offered alternative hotels in central London.  Some people have already been moved several times since the fire broke out.

An article for you to consider: a joke or not?

Mark Steel, a comedian, broadcaster and author who has appeared on Question Time, Have I got News for You and Never Mind the Buzzcocks, wrote the following article for the Independent.  I’ll leave it to you to ascertain whether he’s serious or not; for my part, I suspect that as the writer is a comedian, it is tongue in cheek.  The article is entitled: ‘Crazy Marxists want to give homes to Grenfell survivors – but thankfully we live in a fair capitalist society’.  It was written yesterday:

Paul Waugh from Huffington Post UK has an update in his Waugh Zone this morning, 26.6.17:

Homes and Property article from 2015 advertising the Riverside Apartments in Tottenham:

Guardian, 22.6.17, Thousands warned their building could be covered in the same cladding:

Chalcot Estate surrounded by Police, featured in the Independent:

Images of people having to leave their homes this weekend with a burnt out Grenfell on the left, Grejeen News:  http://news.grejeen.com/uk/2017/06/25/cladding-fire-fears-spread-nationwide-as-40000-face-evacuation-following-grenfell-blaze/

Mattresses at local leisure centre in Camden after residents of the Chalcots Estate told to leave, the Daily Mail:

Comment On Grenfell Tower: The Number of homeless people rises as residents from Chalcots Estate are evicted over the weekend

Re the article in the Independent above:

The article is satirical.. and also very facetious. I actually take quite a big issue with the article and believe it is riddled with logical flaws. You can believe in private property and still sympathise with the plight of the people made homeless by this terrible fire. The damage done by tearing up property rights and the rule of law would be a far worse fate for the entire country than coming up with a more sensible solution to rehouse all the people who have lost their homes. I’m afraid you are a Marxist if you believe in requisitioning private homes (whether vacant or not, or whether foreign owned or not) in the manner suggested. Believing some solution should be found to house these people though does not indicate whether you are a Capitalist or a Marxist.. it just shows you are a caring human being.