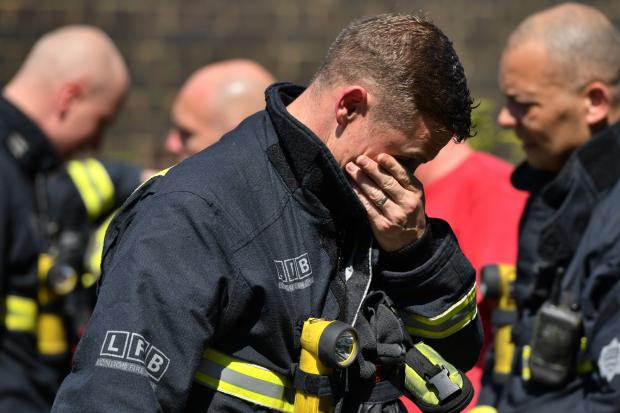 Earlier today The Guardian confirmed that there were ‘at least three’ other tower blocks that have the same combustible cladding used in the refurbishment of Grenfell Tower last year.  And at 4.40pm, the office of Theresa May reported another 4; 7 in all.  Checks on other tower blocks around the country continue.

Nicholas Holgate, Chief Executive of K&C council, resigned yesterday.  His resignation comes not only for the way in which the council responded to the Grenfell Tower tragedy, but also for the council’s ongoing neglect of poorer residents in the borough and a neglect in social housing.

‘He is right to go, he had to go.  His council went awol in the days after this terrible fire at a time when the victims, survivors, those families still looking for their family members who were missing needed help on the ground and, above all, someone to reassure them and coordinate the relief and help efforts’ (Guardian, 22.6.17).

What about the Conservative Leader for K&C council?

Theresa May has not backed calls for the Conservative leader of Kensington and Chelsea council, Nicholas Paget-Brown, to resign over his authority’s response to the fire, although he did offer.  She has asked him to ensure that the council provide better support for the survivors.

Spokeswoman for the Justice4Grenfell campaign group, Yvette Williams, comments on her thoughts as to why Holgate’s resignation was accepted but not Paget-Brown’s:

‘This represents the structure dominating society: Nick Paget-Brown comes from a political structure; the other Nick is an officer in the hierarchy.  Somebody’s got to take the drop and it is usually the lower down person’ (Guardian, 22.6.17).

Paget-Brown was interviewed on News Night last Friday and was asked if installing sprinklers was considered as part of the 2016 refurbishment of Grenfell Tower.  He said the advice at that time was that the best way to combat the spread of a fire was to contain it:

‘I didn’t consider retrofitting sprinklers because we were told that what you try to do when you are refurbishing is to contain a fire within a particular flat so that the fire service can evacuate that flat, deal with the fire.  There was not a collective view that all the flats should be fitted with sprinklers because that would have delayed and made the refurbishment of the block more disruptive’.

Experts have suggested that sprinklers could have been fitted during the refurbishment of Grenfell Tower for £200,000.

Here is the interview:

Concerns in the House of Commons

Labour MPs criticised Theresa May for failing to give guarantees that the government would pay all costs that were necessary in carrying out the relevant safety works required to make sure that tower blocks are safe.  May’s response to the retro-fitting of sprinklers was as follows:

‘I have made it clear that where work is necessary, resources will be available to ensure that work can be undertaken.  But it is for the government to work with the local authorities to ensure that that takes place’.

She also said, (something that echoes Chancellor Philip Hammond’s earlier statement), that the retro-fitting of sprinklers wouldn’t make a difference in all cases.  It might not but it would certainly be a start.

Driving into work yesterday morning after dropping my son off at school, there was someone from the fire brigade chatting on the radio about the use of sprinkler systems.  I can’t remember who it was or which radio station it was: I have checked but to no avail.  He said that in every case where sprinkler systems were installed, the fire did not spread.  The sprinkler systems are effective because they put out the fire in area where it had initially started, thereby ensuring that there is no fire to spread.  In no cases, as far as he recalled, could he think of a single death reported from a tower block fire in which a sprinkler system had been installed.

The Government is performing tests on 100 tower blocks a day, with results coming back ‘within hours’, according to Theresa May.  The fire released deadly hydrogen cyanide gas that was released as insulation boards on the tower block burned may also have been a contributing factor in the deaths.

A Precedent that was ignored

According to former deputy Labour leader, Harriet Harman, the Grenfell Tower disaster could have been avoided if the Government had acted on the findings of an inquest into the deaths of 6 people in the 2009 Lakanal House fire in Camberwell.  In 2013 after investigating the 2009 Lakanal House fie, the coroner said that the deaths could have been avoided.  In his view, there there should have been sprinklers, changes in the fire instructions and greater supervision of contract and fire instructions.  That same coroner’s report called on the Government to put pressure on housing providers responsible for high rise flats to consider the retro-fitting of sprinkler systems (Independent, 22.6.17).

The Response of the Fire Brigades

The Fire Brigades Union (FBU) have sent a letter to MPs insisting they are named as a core participant in the public inquiry.  The letter said that current building regulations in England are too ambiguous about fire safety matters vis-a-vis cladding, and are also inadequate when it comes to sprinklers.

Croydon Council: Croydon council will install sprinklers in all tower blocks of 10 storeys or above, of which there are 25.  It is expected to cost around £10 million and will not start until after the council submits a report on the project in September.

Camden Council: Tenants in 700 flats in the five tower blocks that make up the Chalcots estate in Swiss Cottage in London received a hand delivered letter from Camden council this morning advising them that the cladding was the same as that in Grenfell Tower and would be removed immediately.  Until the cladding is removed, council staff will carry out round the clock fire safety patrols on the estate’s corridors, according to LBC RAdio.

The same company that refurbished Grenfell also refurbished the Chalcots estate.  That company, Rydon, are could now be facing legal action.

According to the Nottingham Post, Nottingham City Homes has confirmed the sprinklers will be fitted in corridors and communal areas in all its high-rise buildings as an added safety measure.

Residents will also be asked whether they would like the sprinklers installed in their own flats.  A total of 1,700 people live in tower blocks managed by Nottingham City Homes (Nottingham Post).

What is the law?

English law requires only buildings constructed since 2007 and which are taller than 30m to have sprinklers fitted, and the law was not applied retroactively. Grenfell Tower was built in 1974.

Sprinklers must be fitted to older buildings, however, if a fundamental change is made to the structure or use of the building.

The Welsh Government said sprinklers would be compulsory for all new-builds from 2016 but this would not require older buildings to be refurbished.

In Scotland, a law in 2005 was introduced to fit sprinklers in new high-rise flats, care homes and sheltered housing. In Edinburgh, none of the 44 tower blocks built before then have sprinklers and residents have called for urgent action. Fitting sprinklers has been estimated to cost around £8m.

This was released yesterday to support the victims of the Grenfell Tower fire and can be bought on I Tunes for only 99p.  I have already bought mine and I played it to my little boy in the car this morning as I dropped him off to school.  He is only 6 but I explained to him what had happened and what the song had been made for.  Here is the accompanying video reproduced in the Mirror:

The Guardian online have a dedicated section to deal with updates on the Grenfell Fire.  You can see it here:

The Independent, 20.6.17, on how local and regional authorities intend to respond to the fire:

The Independent, 16.6.17, the reason why there were no sprinklers: