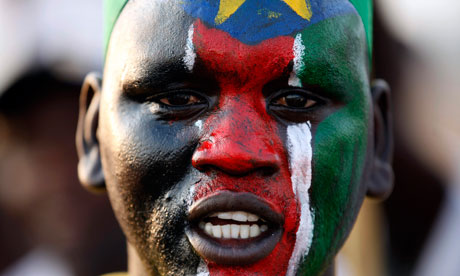 On 28th April 2016, a new Unity Cabinet was formed in South Sudan’s capital, Juba.  The new cabinet was announced on state television by current President Salva Kiir who has said that 1/3 of its members in the new 30 member national unity cabinet will include former rebels and members of the opposition party, led by the re-instated Vice President Riek Machar.

The Reason this is this in the News

South Sudan suffered a return to internal conflict after President Kiir sacked Machar in July 2013.  He subsequently accused him of attempting to oust him from power in a military coup later that year in December.  Since then, both sides have been in conflict and a UN brokered peace deal that was signed in August last year by both sides has continually broken down.

The History of South Sudan

Sudan was formerly uner joint British/Egyptian rule until 1956, when it gained independence.  Since that time, the country has been embroiled in conflict.  The South accused the North of trying to back out of an agreed federal system and impose a unilateral Islamic (religious) and Arabic (ethnic) identity.

The first civil war (1955-1972) erupted prior to independence in 1955 when the South revolted against the government. This was led by the Guerrilla movement Anya Nya.  The conflict continued until 1972 when a Peace Agreement was drawn up in Addis Ababa, sadly only lasting until 1983.  This was the country’s first post independence civil war.  The Addis Ababa Agreement gave the South a degree of autonomy.  In 1983, discontent resurfaced when the South, led by the Sudan People’s Liberation Movement (SPLM) and its armed wing, the Sudan People’s Liberation Army (SPLA) rebelled against the introduction of Sharia law which had been proposed by then President Nimeiry (President of Sudan from 1969-1985).  As a result, prior agreements for autonomy were revoked.

The second civil war (1983-2005) lasted 22 years and is Africa’s longest civil war to date.  It ended with a Peace Agreement in which the South were granted regional autonomy and a power sharing government was established.  (Herewith a copy of the Agreement: https://unmis.unmissions.org/Portals/UNMIS/Documents/General/cpa-en.pdf and a summary of the same: http://www.c-r.org/accord-article/summary-comprehensive-peace-agreement).  The Agreement made a provision for a future referendum on independence to be held and in 2011, 99% of the South Sudanese population voted for independence.  South Sudan was formed on 9th July 2011.  This was Africa’s first new country since Eritrea split from Ethiopia in 1993.

Conflict flared in December 2013 when there was a power struggle between the President and his Vice President, in which the Vice President was sacked, as outlined above.  The conflict lasted from 2013 until August 2015 when a Peace Deal was signed, although this broke down on several occasions. President Kiir accused his Vice President of starting the conflict in an attempted coup on 15th December 2013, which failed.  Machar denied this and blamed Kiir for sacking him in order to fend of any opposition in the forthcoming 2015 elections.

Also at the heart of the conflict were government proposals to add 28 new states to South Sudan, thereby carving up the country.  Machar saw this as an attempt by the President to weaken the opposition and further deliberated that this unilateral proposal by the President was in direct contravention of any pre-existing power sharing agreements.  (Source: https://www.stratfor.com/analysis/south-sudan-peace-still-distant-prospect).

Recent events have returned the Vice President to his position in Juba, South Sudan’s capital, and the opposition party now features more strongly in the in the national unity cabinet, thereby increasing their decision making powers in the executive branch of the government.

Prior to division of Sudan in 2011, there were ethnic divisions in the country as a whole in so far as the majority in the North of the country were Arab Muslims; (although there are some non-Arab Muslims in the area of Darfur in what was then the North: this will be discussed in another article).  Another example of this can be seen in the Kurdish population which spans across 4 countries in the Middle East: Iran, Iraq, Turkey and Syria.  Whilst the majority of Kurds are Muslim (Sunni Muslim, as opposed to the current Shia Muslim government in Baghdad, Iraq), they are not Arab Muslims: religious similarities but ethnic divisions with a different culture, a different language and different ancestral roots.

The South is predominantly Christian with few Muslims.  There are 5 main ethnic groups in South Sudan which can be seen in this map:

The two main ones, as you can see, are Dinka (President Salva Kiir) and Nuer (Vice President Riek Machar).  These divisions has splintered the army and have been responsible in the past for rivalries.  Ethnic divisions however are only one layer.  All 5 ethnic communities have been engaged turf wars since the country gained independence in 1956.  For what reason?  A scramble for scarce resources is one; theft of cattle another; disputes over grazing land one and access to water points: all of these resulted in animosities between the tribes.

The Likelihood of Success of this Peace Deal

Both sides have run out of money.  The main government is suffering as a result of the drop in oil prices; crude oil being the most prominent source of income (the second is agriculture, which employs around 80% of the population).  Furthermore, the transit costs in the Sudanese pipelines are high.  Civil servants are not being paid as the government is low on funds and the army supplies on both sides are low.  Whilst the re-instated Vice President has a greater military following than the President, again, both sides are curtailed by a lack of finances.  Ukraine had been supplying the Vice President with arms but they can no longer afford to pay the bill.  (Source: https://www.stratfor.com/analysis/south-sudan-peace-still-distant-prospect.  China had supplied many of the President’s arms: Source http://thediplomat.com/2015/08/un-report-china-sold-20-million-in-arms-and-ammunition-to-south-sudan).  (Please note that supply of weapons from countries is often an economic factor only; therefore it does not necessarily allude to any taking of sides).  According to Reuters, US Secretary of State John Kerry has threatened sanctions if both sides fail to cooperate.

I read an interesting article from 23rd January 2014 which addressed the issues of ethnic conflict in South Sudan:

The writer acknowledges ethnic divisions being a contributing factor but as with all wars, a struggle for power is another.  He proposes, in addition to the recent events (note this article written prior to recent events), other issues need to be addressed:

Peace and Security Council of the African Union: http://www.peaceau.org/en/page/38-peace-and-security-council