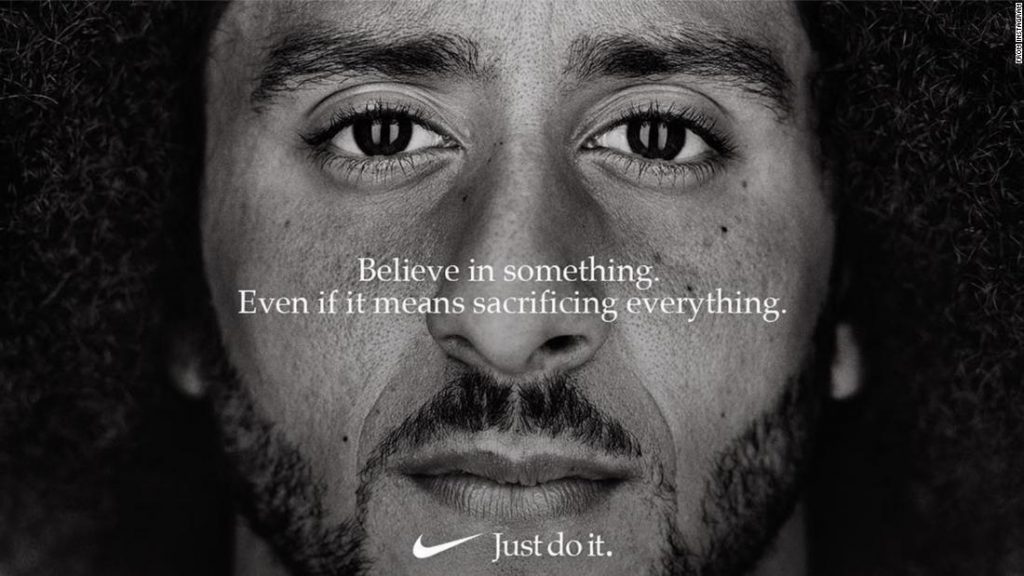 Colin Kaepernick, an NFL player already well-known amongst fans of American football, became famous and infamous simultaneously, depending on who you speak to, for his ‘take a knee’ protest that incensed US President Donald Trump. The protest has politicised the popular sport, with President Trump demanding that players who do not stand for the national anthem are fired from their teams for being unpatriotic. Vice President Mike Pence also walked out of a game when the players knelt, although he had clearly attended simply to be able to make Trump’s counter-protest.

The ‘take a knee’ protest is the act of kneeling for the American national anthem which is sung before kick off at NFL games. Kaepernick began the protest a couple of years ago to highlight police brutality and the high number of deaths of black men at the hands of police officers, who often went unpunished for these offences, saying at a press conference:

“I am not going to stand up to show pride in a flag for a country that oppresses black people and people of colour. To me, this is bigger than football, and it would be selfish on my part to look the other way. There are bodies in the street and people getting paid leave and getting away with murder.” 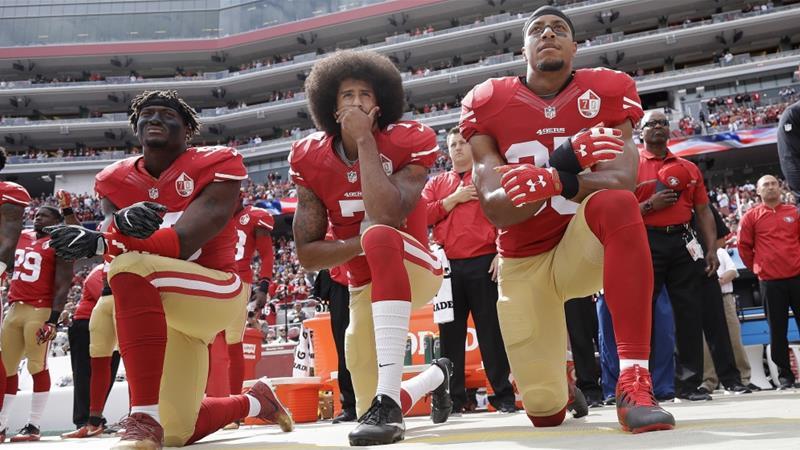 Colin Kaepernick (centre) takes a knee during the national anthem 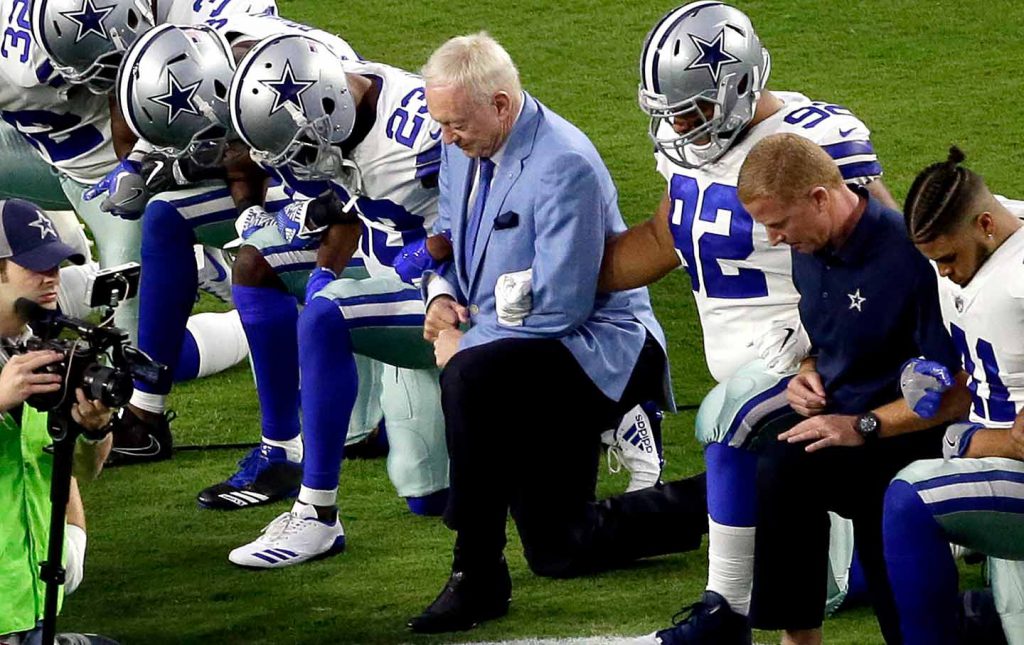 The protest gathered steam after Donald Trump criticised the players taking part in the protests at a rally in Alabama, saying they should all be fired:

The President’s comments not only whipped his base up into a frenzy with calls for the NFL to be boycotted unless the organisers took action against the protesting players, but they also encouraged more players to protest with basketball and baseball players taking up the mantle.

Kaepernick had been unemployed since March 2017 after his contract with the San Francisco 49ers came to an end and no other club wanted to sign him. He is suing NFL owners for allegedly colluding to keep him out of a job in retribution for the protests.

Nike, a major NFL sponsor and the league’s official clothing partner, first signed an endorsement deal with Kaepernick in 2011. This year is the 30th anniversary of the brand’s ‘Just Do It’ slogan and they chose to make Kaepernick the face of the new campaign, with Gino Fisanotti, Nike’s vice-president of brand for North America, telling ESPN:

“We believe Colin is one of the most inspirational athletes of this generation, who has leveraged the power of sport to help move the world forward.”

The brand also issued a statement in September last year, coming out in support of the protesting players:

Kaepernick’s new ad features a black and white image of his face with the following words laid over the top:

“Believe in something. Even if it means sacrificing everything”

The athlete posted the image on his Instagram account on Monday and to date it has almost 900’000 likes. 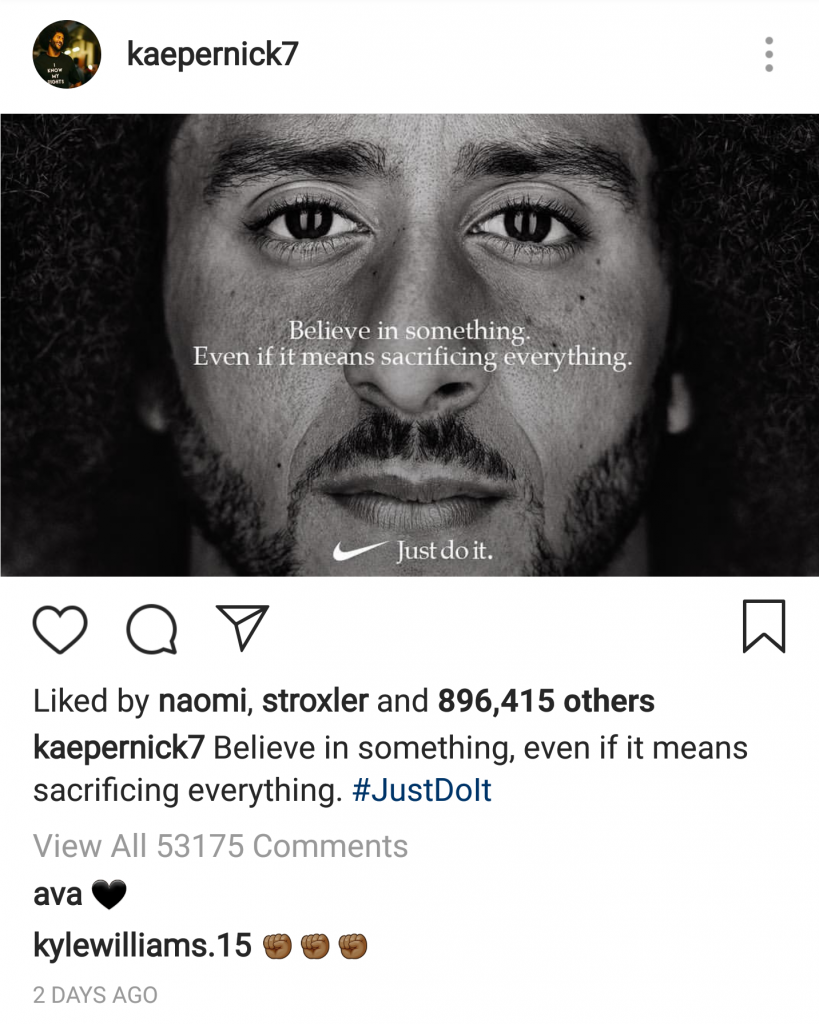 It goes without saying that Nike is not a charity and obviously they have seen the commercial advantage of featuring a well-known polarising figure, and a hero to a large number of black Americans, as the face of their important anniversary campaign.

However, they have still taken a chance on Kaepernick which will anger some of their longtime fans.  Across the USA protests have already erupted with videos and images circulating on social media of Nike apparel being burnt or the logo being cut out and/or destroyed. Nike’s share price has dropped since they released the ad on Tuesday and #NikeBoycott is trending on Twitter.

The Financial Times writes that:

‘Research has shown that “high blame” incidents damage celebrity brands, while low-blame events (injury being the obvious example) may encourage sympathy. For some, Kaepernick’s stand will represent a high-blame incident.’ (FT, 04.09.18)

Whether you view the campaign with admiration or cynicism it has still given Kaepernick a platform to continue his protest and highlight an important issue amongst black Americans at a time when their president is comfortable referring to white supremacists as ‘good people’.

Colin Kaepernick is a shrewd choice for Nike’s new campaign

Taking a knee: Why are NFL players protesting and when did they start to kneel?