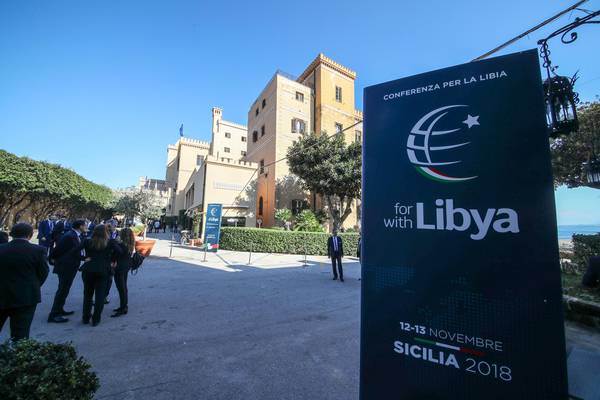 What is the current situation in Libya?

The North African country has been locked in a state of violence since 2011 when a popular uprising ended with the overthrow and death of former president Muammar Gaddafi. The uprising was buoyed by other revolts in neighbouring Arab countries such as Tunisia and Egypt, collectively known as the Arab Spring.

Despite peace efforts, the country has remained divided between the Government of National Accord (GNA) in Tripoli, led by Prime Minister Fayez al-Sarraj, and leader of the Libyan National Army (LNA), General Khalifa Haftar’s administration in the east.

UN-backed talks to secure a resolution to the country’s political divisions began in September 2017 in the Tunisian capital, Tunis, and aimed to prepare for Libyan presidential and parliamentary elections in 2018, but the talks broke down about a month later without a deal. 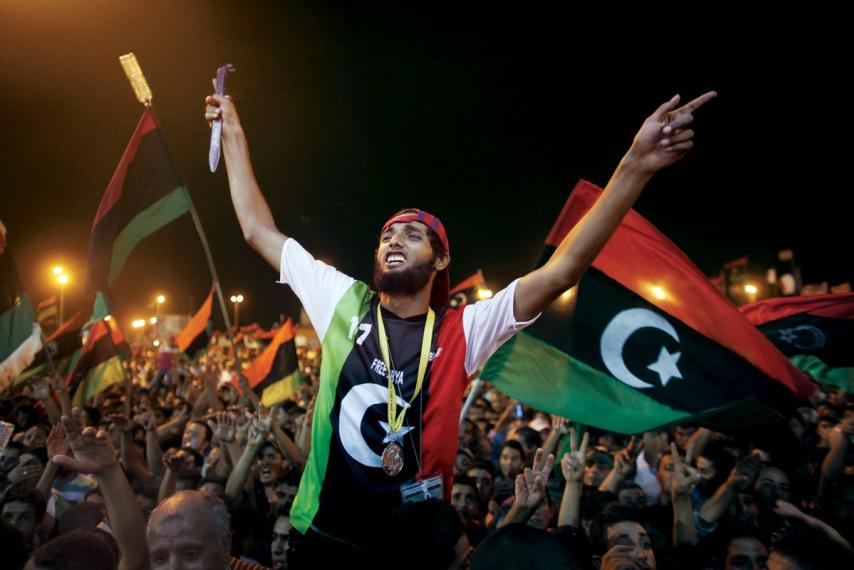 The Conference, taking place over two days in Palermo, Sicily, aims to demonstrate the international community’s full support for the implementation of the United Nations Action Plan on Libya and the efforts of UN Special Representative Ghassan Salamé to overcome the political stalemate in Libya’s transition towards a stable, secure and prosperous country. A press release on the European Union External Affairs website says:

‘The European Union has for years been supporting Libyans through its extensive cooperation, including support for a political transition, to the security sector and the economic development, in terms of humanitarian aid and will continue to stand next to the Libyans to work for a better future for all.’ (09.11.18)

Short remarks by High Representative for Foreign Affairs and Security Policy/Vice-President  of the European Commission Federica Mogherini were also published on the site:

‘The European Union is in Palermo today, first of all, to support the Libyans – our Libyan friends that we have been supporting over all of these years with not only political support and security work and cooperation, but also with more than €370 million in support of the Libyan people.

We are here to support the work of the United Nations to mediate and find a political solution. The risk we have to avoid is that the security situation in Libya deteriorates even further and that the temptation of a military solution prevails – that would only worsen the situation for the country and for the entire region. This is why the European Union supports with all its political weight, with all its resources, the mediation and the political work of the United Nations and any space for dialogue and advancing on this difficult work.’ (13.11.18)

The Guardian writes that ‘Italy’s prime minister, Giuseppe Conte, had planned to use the conference in Palermo on Monday to confirm his country as the leading European power broker in Libya and timed it to follow the weekend armistice ceremonies in Paris, in the hope that Donald Trump and Vladimir Putin would travel on to the Sicilian city.’ (13.11.18) 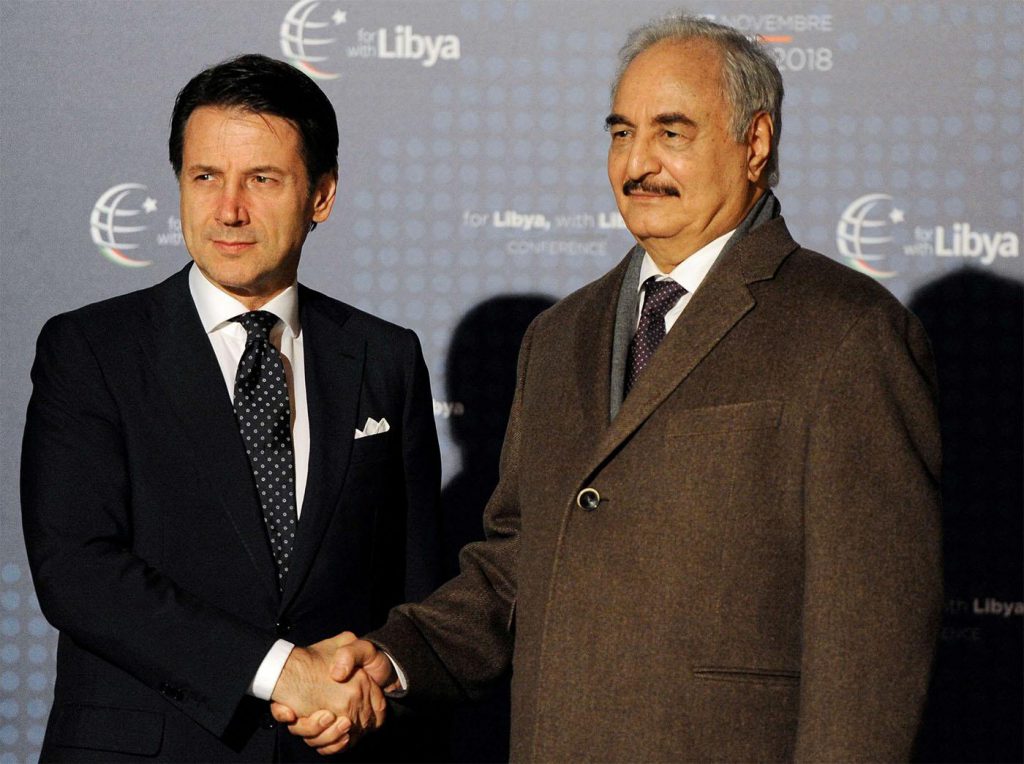 The attendance of key figures has been reported as poor with Conte only arriving mid-afternoon, the Italian Foreign Minister, Enzo Moavero, leaving early for Brussels and although General Haftar has flown to Palermo, he declined to take part in the conference, instead organising separate meetings with foreign leaders, saying “I will not take part in the summit even if it takes 100 years,” Source: Channel News Asia, 13.11.18

The Italians were, however, able to point to the attendance of the UN secretary general, António Guterres, Egypt’s president, Abdel Fatah al-Sisi, and the Russian prime minister, Dmitry Medvedev.

Claudia Gazzini, International Crisis Group’s senior analyst for Libya, has covered the event, making the following comments about the first day in a series of  tweets on Monday 12th November: 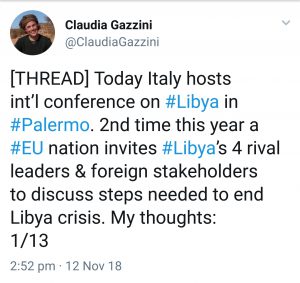 3/13: Uncertainty lingers on whether the summit will produce much beyond a plain endorsement of the UN’s ongoing efforts in Libya. Even a final written communiqué is in doubt.

7/13: Many Libyan actors pay lip-service to holding elections, but commitment to implementing necessary legal & political steps to get there is often feigned.

8/13: Italian officials say the meeting’s aim is to provide Libyan factions with a chance to agree on new political, economic & security arrangements + ensure international support for them. But chances of a breakthrough are slim.

9/13: Obstacles to peace and a realistic settlement include:
➣ fragmentation of the political scene
➣ politicians & military stakeholders vested interests to keep power
➣ their proven ability to spoil efforts

10/13: Most realistic outcome: endorsement by Libyan & external attendees of a reconfigured UN Action Plan, as announced by SRSG Ghassan Salame on 8 Nov. This consists of a UN-hosted National Conference in Jan 2019 & renewed commitment to holding elections next year.

12/13: One positive aspect of this summit is its format: rather than focusing solely on politics, it also has sessions on the economic & security fronts. This is recognition that Libya crisis needs an integrated strategy.

In a surprise twist, it has been reported that General Hafta met with rival, Libyan PM Serraj in the presence of Italian PM Conte. This was the first meeting between the pair in more than five months.

Greek PM, Alex Tsipras, EU Council President, Donald Tusk and French Foreign Minister, Jean Yves Le Drien, were also present on day two. Channel News Asia reports that ‘France has been courting Haftar, who is supported by Egypt and the United Arab Emirates, which see his forces as a bulwark against Islamists. Italy is seen as the main backer of Serraj and his weak Government of National Accord (GNA)..’ (13.11.18) 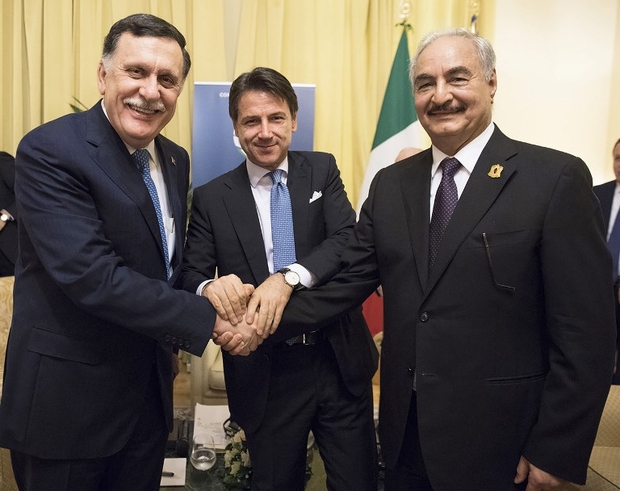 “The international community, unfortunately, could not reach a consensus this morning. Some [countries] have unilaterally interfered in the process by misusing the meeting being hosted by Italy.”

“As long as some countries continue crippling the process in the direction of its own benefits, stability cannot be provided in Libya,” he added, without naming any country.

Oktay said that it was a very “misleading” and “harming” stance that an unofficial meeting was held between some sides this morning and these sides were being represented as primary actors in the Mediterranean region.

“On the contrary, we are open to wide-range dialogue with all the actors in Libya and the region,” the vice-president added. 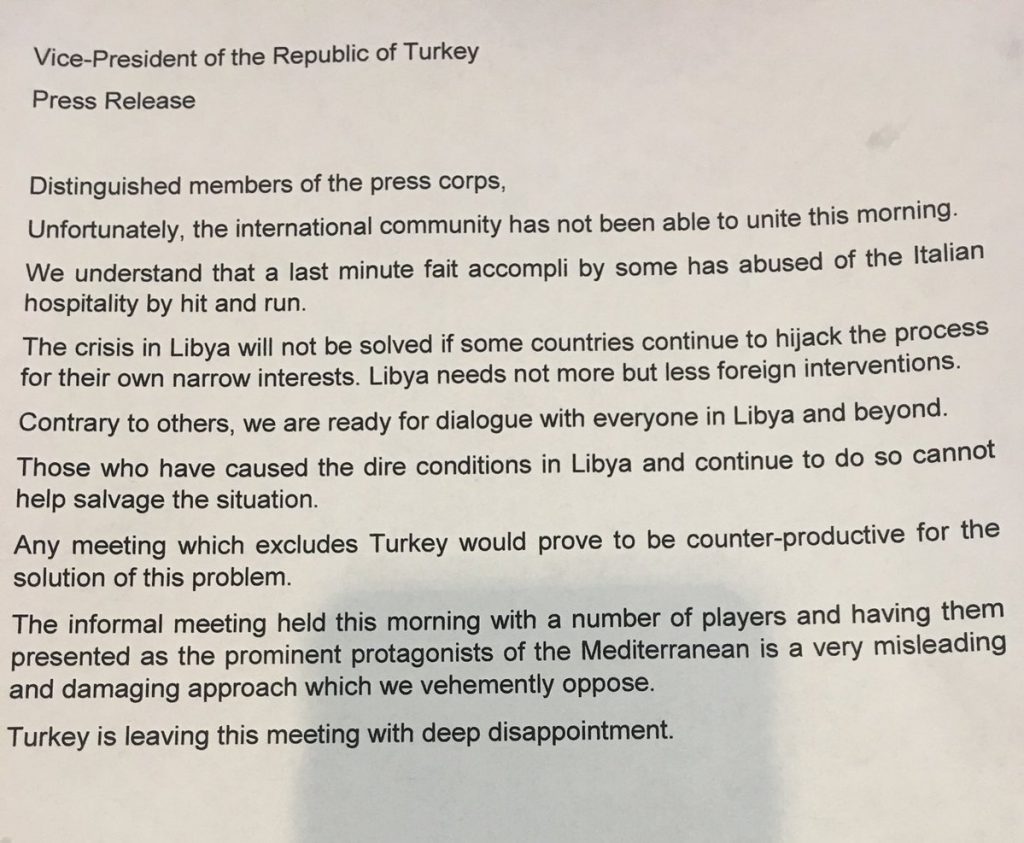 Reuters writes that ‘U.N. Special Envoy Ghassan Salame decided to abandon a plan to hold elections on Dec. 10 after a spike in violence in Libya, which has been gripped by conflict and paralyzed by political deadlock since the overthrow of Muammar Gaddafi in 2011.’

Last week, Salame said that the new UN plan for Libya would include an election in the spring. During the Reuters interview the envoy said this meant the vote would be held between late March and late June, but that the format of the poll would depend on what was decided at the national conference scheduled for early 2019.

Sarraj’s spokesman said on Twitter the prime minister was committed to a U.N. road map to hold an election in the spring after a constitutional framework is put in place. Italian Foreign Affairs Minister Enzo Moavero also agreed with this statement.

An Italian diplomat said Haftar, for his part, had given his backing for Sarraj to remain in office as prime minister until the election can be held.

Short remarks by High Representative/Vice-President Federica Mogherini in the margins of the International Conference on Libya in Palermo, EU External Affairs

Rival Libya leaders meet for first time since May

Rival Libya leaders meet for first time since May