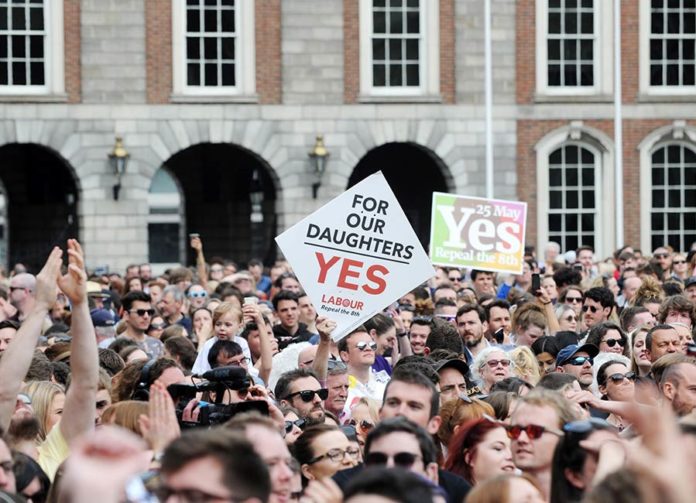 On Friday 26th October, Ireland goes to the polls to vote in the presidential election and the blasphemy referendum. The country recently voted overwhelmingly to repeal the eighth amendment, legalising abortion. With attitudes modernising and the Catholic Church losing influence in the country due to the recent sexual abuse scandals involving priests and the institutional abuse of unmarried mothers, it is unlikely that the referendum will uphold the current laws. 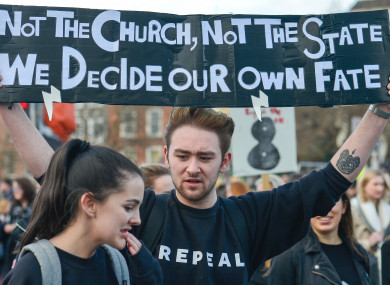 Protesters campaigning for the legalisation of abortion

What is the definition of blasphemy?

Blasphemy is “the action or offence of speaking sacrilegiously about God or sacred things”.

What is Ireland actually voting for?

The upcoming referendum will decide if the Irish Constitution should continue to say that publishing or saying something blasphemous is a criminal offence or, if the referendum is passed, the Oireachtas (Irish parliament) will be able to change the law so that blasphemy is no longer a criminal offence.

Currently the Constitution says that publishing or saying something blasphemous is an offence punishable under law. Blasphemy is currently a criminal offence and, if convicted of this offence, a person may be fined up to €25,000.

What does the Constitution say?

Article 40.6.1˚ of the Constitution says: “The State guarantees liberty for the exercise of the following rights, subject to public order and morality:

“The right of the citizens to express freely their convictions and opinions. The education of public opinion being, however, a matter of such grave import to the common good, the State shall endeavour to ensure that organs of public opinion, such as the radio, the press, the cinema, while preserving their rightful liberty of expression, including criticism of Government policy, shall not be used to undermine public order or morality or the authority of the State.

“The publication or utterance of blasphemous, seditious, or indecent matter is an offence which shall be punishable in accordance with law.”

The proposal in the referendum is to remove ‘blasphemous’ from the above text. 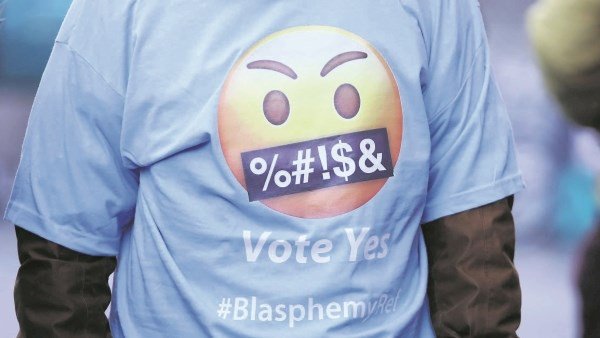 Has anyone been convicted of blasphemy in Ireland?

Not since 1703 (pre-dating Irish independence).

According to court documents, in 1703 Thomas Emlyn, a Unitarian pastor in Dublin, was convicted of blasphemy, fined £1,000 and sentenced to one year’s imprisonment.

Emlyn published a book arguing that Jesus Christ was not the equal of God the Father.

Why hold a referendum now?

In 2012, a constitutional convention was established to go through the 1937 constitution and make recommendations for changes.

In 2014, it published its report. Among its recommendations was to hold a referendum on whether to remove blasphemy from the constitution.

Blasphemy laws around the world

A 2017 report by the US Commission on International Religious Freedom found 71 countries to have laws which criminalised views deemed to be blasphemous, across all religions.

Blasphemy laws are most common in majority Muslim countries of the Middle East and North Africa, as well as regions of southeast Asia. However, they are also to be found in pockets of the west, such as Poland, Italy, and Ireland.

The punishments for these transgressions vary from fines, to prison sentences, to the death penalty. A 2016 study by the Freedom of Thought report found that 43 countries allow a prison term for blasphemy, while it is punishable by death in six countries: Afghanistan, Iran, Nigeria, Pakistan, Saudi Arabia and Somalia.

Blasphemy was abolished as an offence in England and Wales in 2008, but it remains in Scotland and Northern Ireland.

Out of all the countries in the world that have a blasphemy law, Ireland’s is the least restrictive.

Ireland had the lowest score (being the least restrictive) out of 71 countries in a 2017 US Commission on International Religious Freedoms report analysing the extent to which such laws are in conflict with international human rights laws. At the other end of the scale were Iran and Pakistan, which can both impose the death penalty for blasphemy offences.

The report found Ireland was among three countries whose laws allow for fines for the offence of blasphemy. The others are Spain and Switzerland. 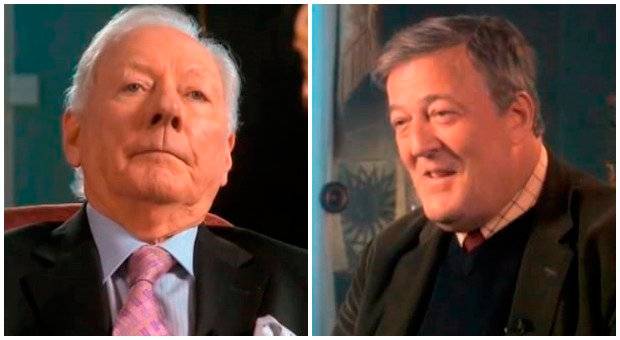 Blasphemy laws in Ireland came under the international spotlight in May 2017 when gardaí (Irish police) launched an investigation into comments made by comedian and actor Stephen Fry.

Fry was interviewed on the RTÉ programme ‘The meaning of life’ in 2015.

When asked what he would say if he ever confronted god in an afterlife, he said: “Why should I respect a capricious, mean-minded, stupid god who creates a world so full of injustice and pain?”

“The god that created this universe, if it was created by a god, is quite clearly a maniac, utter maniac, totally selfish.”

A member of the public complained to gardaí about Mr Fry’s comments.

Gardaí subsequently carried out an investigation under the 2009 blasphemy laws, but later dropped the investigation.

WATCH: Stephen Fry on God | The Meaning Of Life | RTÉ One

Explainer: 10 things you need to know about the blasphemy referendum

Ireland referendum: Blasphemy laws and punishments from around the world

Has Ireland lost faith in its church?