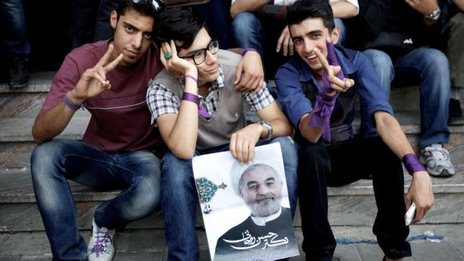 Incumbent Iranian President, Hassan Rouhani (68) has won a second term as Iran’s President in yesterday’s election.  He was announced as the winner early this morning on Iran’s state television.

The Presidential elections in Iran are held every 4 years and the incumbent usually manages to win a second term.  Rouhani secured 57% of the ballots cast, according to Bloomberg today.

His rival, the hardline cleric Ebrahim Raisi (56), who is rumoured to be next in line for Supreme Leader when the existing one (77) dies, took 38.5%.

What was the turnout?

There are 56 million eligible voters in Iran and more than 41 million voted, which puts turnout at above 70%.  Traditionally, a high turnout always bodes well for the reformist candidates.

What were the expectations?

Pre-election polls showed Rouhani doing well in urban centres. Rouhani supports greater social freedoms and has a more open agenda with the West.  He wants to encourage greater foreign investment and work to release sanctions that are still in place: not the ones that were imposed because of Iran’s nuclear activities but the ones in place because of the country’s continued sponsorship of terrorist groups.

Rouhani was a post graduate student at Glasgow Caledonian university in the 1990s where he worked on a thesis entitled ‘The flexibility of Shariah (Islamic Law) with reference to the Iranian experience’.  His supervisor whilst studying in Glasgow, Dr Mahdi Zahraa, said of him the following:

‘He was a quiet-spoken, very gentle man with whom I enjoyed intelligent and challenging conversations.  His spoken English was good.  We had very different views on some matters, on others we found that we held similar opinions.  From our discussions, I ascertained that he had a modern and reformist approach to Shariah law’ (BBC).

The first line of Rouhani’s thesis says that ‘no laws in Islam are immutable’, which means unable to be changed.

The rival candidate Raisi was more popular among the working class and rural poor who have yet to see the economic benefits trickle down from the release of economic sanctions as a result of the 2015 nuclear deal.  He is more traditional and religiously conservative and would have adopted a more isolationist policy towards the west than his rival.  Raisi had campaigned with a promise to offer greater welfare payments to the poor.

Have their been any other reformist Presidents with a similar forward thinking agenda?

Yes, the reformist ex-president Mohammad Khatami.  He tried to moderate Iran’s harsh repression of women and minorities and alleviate its international isolation during his 1997 to 2005 reign.  He served two terms but was criticised by some for not living up to his promises.  Khatami was replaced by the hardline cleric Mahmoud Ahmadinejad who also served two terms, from 2005–2013, when he was replaced by Rouhani.  Khatami was a strong supporter of Rouhani when he was first elected in 2013.

An interesting conjecture from The Atlantic

‘A victory by either candidate offers advantages to Khamenei.  A Raisi victory would provide something the supreme leader has always sought in a president: an obsequious mini-me in appearance, demeanour, and most importantly worldview.

A second term for Rouhani and his Foreign Minister Javad Zarif, on the other hand, will make it more difficult for the United States to rally international support against Iran, given that those men are perceived as reasonable pragmatists. This is precisely why notable Iran hawks in Washington have endorsed Raisi’.

A bit more on Iran

Iran is a Shiia dominated country whereas Saudi Arabia are Sunni led.  Both are rivals in the Middle East and view each other suspiciously in terms of the other attempting to extend their influence.  The ongoing war in Yemen is said to be a proxy war with Iran and Saudi Arabia pitted against each other.  Iran supports the Assad regime in Syria, along with Russia.  They do not have a good relationship with Israel and are known to fund some terrorist organisations such as Hezbollah, the Shiite guerrilla group in Lebanon.  They are also said to support two Palestinian anti-Israeli groups in the occupied territories.

President Trump is today visiting long time American ally, Saudi Arabia.  He arrived this morning with his wife, Melania and daughter Ivanka.  It is his first stop of an 8 day tour and will include a visit to Israel, Italy and Belgium.  It doesn’t seem to include a visit to Iran.

Here’s a schedule of his trip that I found on Newsweek: