US Politics: So what does Mr Trump think of Saturday’s protests against him?

Home / Articles / US Politics: So what does Mr Trump think of Saturday’s protests against him? 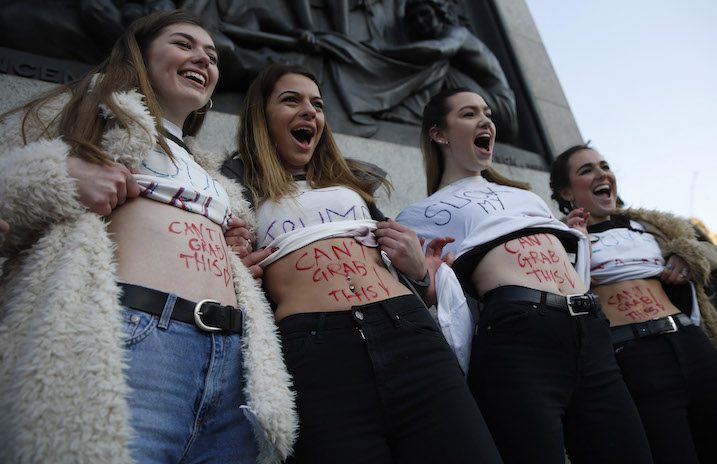 US Politics: So what does Mr Trump think of Saturday’s protests against him?

This Saturday just gone, oceans of women across the globe took place in solidarity marches following President Trump’s inauguration on Friday.  It was one of the largest political demonstrations in US history with 673 marches (or 60 countries on every continent) taking place around the world (FT 23.1.17).  Amongst those that I saw on the Atlantic’s photo essay of the marches, these included Greece, some countries in Africa, Kosovo, Spain, France, Germany, Canada, the Czech Republic, Australia, Antarctica and even Russia (who have been accused of helping Trump get there in the first place).

[Speaking of Russia, one of their most famous musical exports, ‘The Pussy Riot’, perform their own little tribute to the American President which can be seen on the web site for Rolling Stone magazine.  Quite a catchy little number].

Slogans that stood out:

‘The Pussy Grabs Back’; ‘Don’t Mess with the Pussy (ok, I made that one up); ‘I do not like you down my shirt, I do not like you up my skirt’ (a take on Dr Seuss); ‘Making America Hate Again’; ‘Sleazing with the Enemy’ (I like this one); along with the frequently seen ‘Love Trumps Hate’ and ‘Not My President’.  It’s like reading a list of Sun headlines.  President Trump did however, according to one tweet on the Women’s March on Washington Twitter feed, manage to get ‘more fat women out walking than Michelle Obama did in 8 years’ during her health kick campaign.  I personally wouldn’t have put it quite like that but it’s there….

Images that stood out:

A photograph on the Women’s March Twitter feed shows three women dressed as Suffragettes holding up a sign saying: ‘Same Shit, Different Century’.  The Daily Mirror and Elite Daily showcased a trio of young women wearing cropped t-shirts with an arrow pointing down from their navel saying, ‘Can’t Grab This’ (MC Hammer eat your heart out).  In London someone held up a giant pussy with the slogan ‘Although she may be little, her voice is fierce’ (the cat’s, that is).  The little cat with the big voice  can be seen on The Atlantic’s photo montage.  ‘We Shall Overcomb’ was another great contender in the London march: 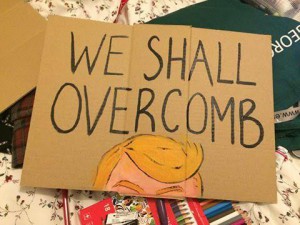 Who says we Brits don’t have a sense of humour? Topping them all, however, was a woman dressed up as an enormous vagina.  Perhaps she should have held up a sign saying ‘I’m no monologue’ (a reference to the famous off Broadway play by Eve Ensler): not one vagina but many! That’s a catchy vox populis if ever I heard one.  Surprisingly, an internet search of images from the march didn’t produce any signs saying ‘Go Vagina’; nor have I discovered any videos on you tube of large groups of women chanting: ‘Go Vagina, Vagina Rule the World’, to the tune of ‘Rule Britannia’.  This would have been quite amusing in London.

No.  Men also took part; some were there to support their friends/girlfriends/wives (Jake Gyllenhaal attended with his sister Maggie).  Some just marched and some were a little more vocal; one image I saw was of a man holding up a placard with the words ‘Smash the Patriarchy’.  I imagine this could be sung in a manly fashion to the tune of ‘Rock the Casbah’ and the men could have had their own little section, a float perchance; maybe a few head butting movements and some air guitar thrown in for good measure.

So Trump had to acknowledge, right?

Yup, he sure did: he acknowledged, on his favourite medium (Twitter).  He said that ‘peaceful protest is a key part of democracy’ and waited until the following day to post it.  Reckon he must have had some help on on that one as I don’t doubt he would much rather have said something else.  A true voice of diplomacy.

What were the reasons for the march in the first place?

1. Protesting Trump himself (the protest started to take shape in November when he won the election under American’s Electoral College system but not the popular vote).

3. Freedom of speech and opinion.

4. Solidarity with other women across the globe.

8. Protection of the rights of immigrants.

11. Clean energy and the environment.

13. The rule of law (should Trump threaten to amend or repeal any legislation, which he has).

Whilst I haven’t read anything that supports Hillary Clinton attending the rallies, she did endorse the march publicly on her Twitter feed: ‘Thanks for standing, speaking and marching for our values @women’s march’.  I’m not sure if Melania has a Twitter feed.

I briefly turned on the television on Friday last week, not to watch Trump’s inauguration speech, rather I wanted to check out Melania’s outfit.  A girlfriend had texted me saying ‘Great coat’ (she shall remain nameless).  I must admit that the powder blue Ralph Lauren number with matching gloves and shoes was pretty snazzy.  The Sun suggests Bill Clinton thought so too:

For those of you who, like me, tuned in for a bit of outfit schmoozing, Melania’s long white dress at the inauguration ball wasn’t bad either.

Whilst checking out Melania’s outfit on TV, I did see a shot of Hillary looking particularly grumpy.  She was less able to hide her disdain than the Obamas.  A prolonged internet search for said grumpy face failed to throw up the particular image I had in mind, but there were a few others.  Many of her looking happy too, it has to be said.  I should have taken a photograph of said face from the TV.  I did manage to get one of the Obamas and the Trumps on the White House stairs waiting for Barack and Michelle to board the helicopter.  That must have been a long wait …

Madonna spoke at the march in Washington saying that this was just ‘the beginning of our story’.  Across the globe in Germany, another high profile woman had similar things to say: ‘We are experiencing the end of one world and the beginning of another’.  Sadly she was not echoing the sentiments of millions of women taking part in the protests; rather Marine Le Pen was speaking at a meeting of right wing populists in Germany. Her support for Trump’s presidency is widely acknowledged.

Writing in today’s FT, Anne-Marie Slaughter was one of the many who marched in New York on Saturday.  She said there was a mood of ‘ebullient solidarity’.  I like that.  To quote Lady Marmalade: Hey sister, Go Sister.  We just need to change the lyrics (see above sub-heading) and perhaps we can have a float for that one too.

Some good inauguration photographs on here used when searching for grumpy images of Hillary:

2 Comments On US Politics: So what does Mr Trump think of Saturday’s protests against him?

Excellent article with enough info to satisfy most groups!