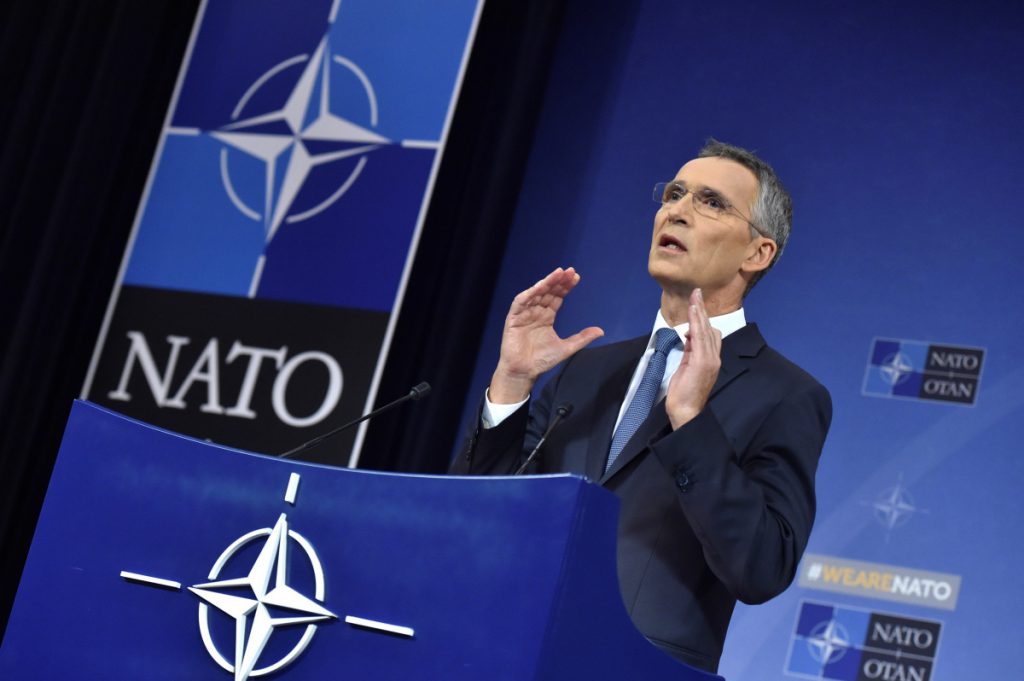 NATO’s annual summit will take place in Brussels on 11 – 12 July 2018. Thereafter Donald Trump will arrive for his UK visit on Friday 13 July and will then fly to Helsinki to hold a separate summit with Putin on 16 July.

During last year’s NATO summit held at the new NATO headquarters in Brussels, Trump embarrassed the other NATO countries by telling them they weren’t spending enough. The United States presently accounts for almost 72% of all NATO spending. There is some concern at Trump may cut funds and forces from the EU’s defence. It is no secret that he sees the US as everybody else’s piggy bank and in the case of  NATO there is more justification available for the claim than usual. However, according to Deutsche Welle, NATO Secretary General Jens Stoltenberg, pictured above, has said that Trump is still ‘devoted to the organisation’ (DW, 8.7.18). 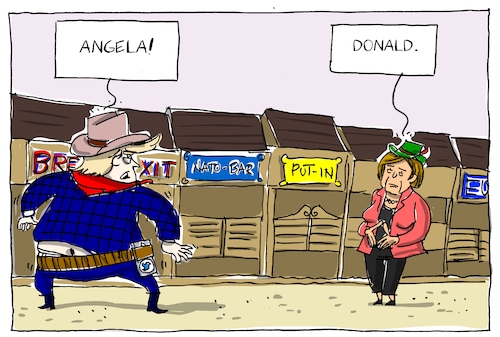 NATO is based on the principle of collective defense: an attack against one or more members is considered an attack against all. So far that has only been invoked once: in response to the September 11th attacks.

To make the idea work, it is important for all members to make sure their armed forces are in good shape. As such, NATO sets an official target on how much each member country should spend, this being 2% of their GDP. This is merely a guideline and there is no specified penalty for not meeting it.

There are 29 members, of which the only ones that do meet that target are the United Kingdom, the United States, Greece and Estonia.

The 2% target doesn’t just only cover spending on defence. It can also be used towards other projects such as  European peace missions Africa, as well as national missions that are not part of NATO operations. One example of tis would be the fight against ISIS.

In 2014, following the Russian invasion of Ukraine and spiraling crises in the Middle East, NATO members set a goal for each country to reach the commitment to 2% of its GDP on defence by 2024.

Below are figures taken from last year’s military spending, according to the NATO website. 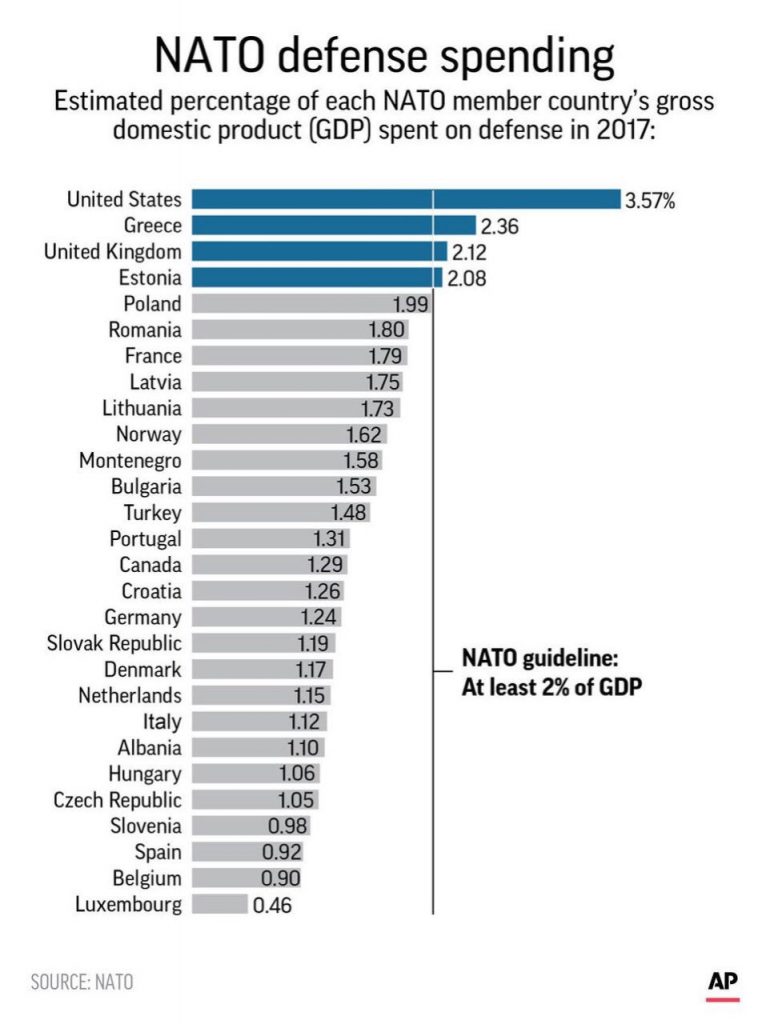 Only the US, Greece, the UK and Estonia kept to the 2% of GDP spending on NATO last year

Trump issues written warnings prior to this week’s summit

On 19th June 2018, Trump wrote to Norway’s prime minister, Erna Solberg, saying that it was becoming harder to justify to US citizens the US NATO commitment to other countries when the other countries were slacking financially. Norway has increased their defence spending by 24% since 2013.

It wasn’t just Norway. Trump wrote to 7 other NATO member countries cautioning them about not meeting their spending commitments. The Belgian prime minister, Charles Michel, wasn’t impressed with his (DW, 29.6.18).

In his letter to Germany, extracts of which have been published in the New York Times, Trump said that ‘continued German underspending on defence undermines the security of the alliance and provides validation for other allies that also do not plan to meet their military spending commitments’. According to Politico, Germany is only spending 1.24% of its GDP on its military, although they are expected to increase that to 1.31% next  year (Politico, 7.7.18). The US spend is 3.57% (see also table above). There are currently around 35,000 US troops in Germany, a NATO battle group in Germany and a new fund that is supposed to deter Russia. All 3 could be at threat if Trump thinks that European nations are taking advantage of the US when it comes to NATO spending.

Other countries to receive letters from Trump were Italy, Spain, Portugal, Luxembourg and the Netherlands.

Maybe it’s about time other countries did step up 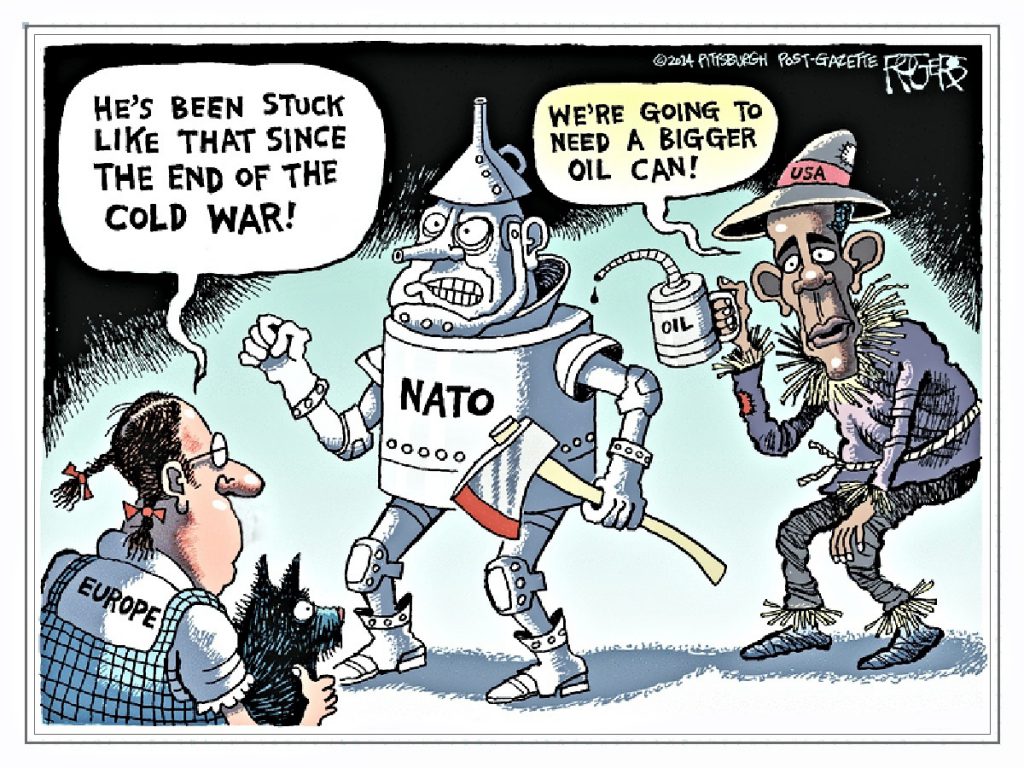 ‘The Trump phenomenon could actually prove to be good for the European Union and NATO. Both organisations have long acknowledged their own need for substantive reform – and then essentially waited for someone else to goad them into action.

Despite his own destructive tendencies, Trump may well prove to be the catalyst they need. Until Trump came onto the scene, neither organisation had to think or act strategically. The transatlantic relationship was taken for granted, as was the international rule book. But now Trump is pushing European elites out of their comfort zone, forcing them to think through their security, defence and foreign policies’ (WP, 6.7.18).

Proposed by France’s president Macron, this aims to create a force that can act in a crisis. According to the Washington Post, this is ‘a kind of coalition of the willing not hobbled by any of the EU’s institutions or member states’ (Washington Post, 6.7.18). It is not the same as the European army proposed by EU Commission president, Jean-Claude Juncker.

Estonia, Latvia and Lithuania were all formerly part of the Soviet Union from 1940 until 1991 and were part of the Russian Empire until 1917; they have large resident Russian populations and are nervous that Russia has ambitions to dominate them once again. Trump’s attitude to NATO solidarity and his closeness with Putin have caused concern in the region, although according to the FT, ‘Baltic officials argue that, despite the president’s outbursts, his administration has provided more support for the region to date than that of Barack Obama’ (FT, 5.7.18).

NATO is an alliance signed in 1949 between Belgium, Canada, Denmark, France, Iceland, Italy, Luxembourg, Netherlands, Norway, Portugal, United Kingdom and USA. Greece and Turkey joined in 1951, and West Germany in 1954. France ceased to participate fully after 1966. Other countries have subsequently joined, particularly since the end of the Cold War when both NATO and the EU expanded into central and eastern Europe. NATO headquarters is in Brussels.

At the core of NATO is Article 5: an alliance that treats an attack on one member as an attack on them all. This was invoked in 2001 following the attacks on the United States on September 11, but it has not been used in any European disputes or confrontations. It is not the only part of the agreement that allows combined action, as intervention in Kosovo in 1999 was under the NATO flag and the organisation participated in peacekeeping and joint military exercises.

Of concern to many is Trump threatening to renege on the collective defence treaty should other NATO member states not start coughing up. More will be clear later in the week. Let’s just hope that Jens Stoltenberg is right in his estimation that Trump is still committed to the 1949 Alliance.

Deutsche Welle, ‘NATO’s Four Thirties plan – does it add up?’:

More on the NATO member countries, of which there are 29:

Origins of the North Atlantic Treaty:

Jens Stoltenberg, Secretary General of NATO (taken from an article by the National Interest dated December 2017):

Trump and Merkel cartoon by Leopold Maurer, www.leopoldmaurer.com, accessed at: