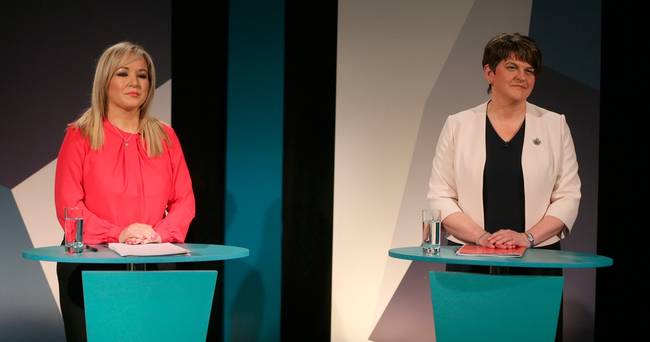 ‘No I won’t’, says DUP leader Arlene Foster, pictured above on the right next to Sinn Fein leader (for Northern Ireland) Michelle O’Neill.  Ms Foster has just taken the biggest number of seats in the elections for the Northern Ireland Assembly, despite a public spending scandal earlier this year.  Hang on, isn’t that happening somewhere else in the world right now?  ‘Aux armes, citoyens, Formez vos bataillons… Marchons, Fillon …..’  Sorry.  I digress.

Last week, Thursday, saw devolved elections in the Northern Irish Assembly.  For the last 20 years or so, the Unionists have held the position of the strongest party and as such, the First Minister has been elected from that party. The Deputy First Minster is elected from the second strongest party.  (By comparison, Nicola Sturgeon is Scotland’s First Minister, in case you don’t understand all this ‘devolved’ stuff).  Since the Good Friday Agreement, Northern Ireland has had to adopt a power sharing agreement where the two biggest parties both have a say.  Once serves as First Minster (the biggest) and the leader of the second biggest serves as Deputy First Minster.

For the last five assembly elections in Ireland, the DUP has come first and Sinn Fein, the largest nationalist party, have come second (Guardian, 5.3.17).

Irish nationalists turned out in their droves for Thursday’s elections and the result was that the Sinn Fein party fared exceedingly well.  Whilst the Democratic Unionists are still the strongest party with 28 seats, they are only one step ahead of Sinn Fein who managed to get 27.  For the first time in Northern Ireland’s devolved politics, the two main nationalist parties: Sinn Fein and the more moderate SDLP, have more seats than the two main unionist parties: the DUP and the UUP, whose leader, Mike Nesbitt, has resigned (Guardian, 5.3.17).  Mr Nesbitt resigned after a disappointing election result which saw his party overtaken by nationalist party SDLP.

Northern Ireland now risks a return to direct rule from Westminster unless the two biggest parties, the DUP and Sinn Fein, can come up with some sort of power sharing agreement.  Sinn Fein can expect to have stronger negotiating powers in the process than they have had in the past, given their success in the elections.

Another stipulation of the Good Friday Agreement is that both parties have three weeks to come up with something or risk a return to direct rule from Westminster.  Of course they could call another election but it is unlikely, in this short space of time, that the results would be any different.

When was the last time that Northern Ireland was ruled directly by Westminster?

Between 2002-2007, for four and a half years.  The executive at that time collapsed in a dispute between nationalists and unionists over policing.  During that period, the political ground shifted away from the centrist parties, i.e. the Ulster Unionists and the SDLP, towards the more hardline position of the DUP and Sinn Fein who are the two biggest parties now.  We have just seen this in the elections.

Would it be such a big deal if Northern Ireland were to return to direct rule from Westminster?

It would be seen as ‘the biggest failure of the devolution experiment in Northern Ireland for a decade’ (FT, 1.3.17).  Dublin would not be very happy.  They are a co-guarantor of the Good Friday Agreement that created the current political settlement.  The idea of no government being formed would not only be a national embarrassment, i.e. ‘us declaring to the world that we are incapable of governing ourselves’; but it would leave Northern Ireland with ‘no budget, no voice for Brexit and [make us] directly governed by a Westminster government that couldn’t be less engaged from Northern Ireland’ (Independent, 5.3.17).

When were the last devolved elections in Northern Ireland?

Last year.  This year, the turnout has ben 10% higher with a strong interest from the Irish nationalists.  It has been the highest turnout since 1998, apparently (Independent, 5.3.17).

So why were there elections again so soon then?

Martin McGuinness, Sinn Fein’s deputy First Minister in the Northern Irish Assembly, walked out of the executive in January because of the allegations into a DUP public spending scandal.  McGuinness had asked DUP leader Arlene Foster to step aside while investigations were carried out but she refused.  Had she resigned while investigations took place, the assembly may not have collapsed.  McGuinness then resigned and was replaced with Michelle O’Neill.  Just in case you are confused, Sinn Fein has a leader in Northern Ireland and one in the Republic of Ireland.  The Republic of Ireland leader is Gerry Adams.  The party is said to have had links with the IRA at the height of the Irish troubles.  Sinn Fein is a nationalist party whereas the DUP are unionists.  Also in case you are confused, the devolved government cannot function unless there is power sharing: it is part of the Good Friday Agreement.  When McGuinness walked out, he basically ‘called time on the executive and put [Ireland] into an election, saying Sinn Fein could not longer stomach the DUP’s approach to power sharing’ (Independent, 5.3.17).

Can you tell me a bit more about the scandal?

Arlene Foster became the DUP leader a year ago.  Prior to her the leader was Peter Robinson. I think he just left/retired because he was quite old: 68, to be precise, but he too (along with his wife) were investigated at one point for some sort of financial scandal, although he was allowed to resume power so it can’t have been that bad.  The scandal involving Arlene Foster was related to a botched green energy scheme she set up back in 2012.  Foster had tried to introduce a renewable heating incentive but there were unforeseen costs and things began spiralling out of control.  The scheme was known as the RHI (Renewable Heat Incentive) and was meant to encourage businesses to switch to more renewable energy sources.

How was she to know that costs would spiral out of control?

There should have been cost control measures contained within the scheme.  No cap was placed on the amount of public subsidy that participants to the scheme could receive so when more heat was generated by the scheme, more money was paid out by the devolved Northern Irish government.  It became known as the ‘cash for ash’ scandal (Guardian, 4.3.17).  Due to poor accounting, the scheme meant that small business and farmers could make £1.60 for every £1 they invested in boilers filled with wood pellets and other recyclable materials (also The Guardian, 4.3.17).

There were reports of some businesses, including farmers and small industries, who were heating empty buildings with cheap biomass full in order to qualify for the big subsidies on offer.  Unless the devolved assembly do something to reduce/amend the bill, there are some who stand to make around £1 million from the scheme over the next 20 years and will cost the Northern Irish tax payers around £500 million.

The DUP were criticised first for coming up with the idea and second for doing anything to stop it when they saw how the costs were escalating.  It’s public money and it’s costing the public a lot of money.  That’s why there’s a scandal.  There should have been more checks and balances.  The government were remiss in this.

So this led to a break down in the devolved assembly and a rift between the two main political parties?

In a word, yes.  The whole thing has ‘exposed political and administrative failings in the devolved executive’ (FT 19.12.16).  Jonathan Bell was the DUP minister who shut down the whole scheme earlier this year after it was discovered how costly it had all become.  He has now been expelled from the party.

The two parties are already completely different with both having been given a mandate to ‘never compromise with the other’ (Independent, 5.3.17).  Reaching some kind of power sharing agreement is not going to be an easy task.  Of the two parties, there is greater will in the DUP to form a coalition government than there is in Sinn Fein.  Arlene Foster has said that she will not be stepping down as DUP leader even though Sinn Fein continue to assert that they will not form a government with the DUP unless she resigns.  This is what Simon Hamilton, former DUP economy minister, said on the BBC Sunday Politics show yesterday, 5th March 2017.  He also said however that Foster still has the backing of her party and that it is not for Sinn Fein to dictate who their nominee for First Minister is.  He also said that the results of the elections had been an endorsement for Foster to stay in power and that Sinn Fein should respect that mandate.

The other speaker on the BBC Sunday Politics show was author and commentator, Professor Jon Tonge, also a unionist.  He said that the results have been an ‘absolute disaster for unionism’ in Ireland.

Negotiations between the two started this morning, Monday 6 March 2017.

How is Northern Ireland represented in the British government?

They have a Northern Ireland secretary: James Brokenshire.  He could call another election if the leading parties are unable to come up with a deal. Unlikely that he will do this as it wouldn’t produce a different result so no point.  According to Vincent Boland in the FT, he doesn’t see any risk of Northern Ireland having to return to a direct rule from Westminster and there is no reason why they can’t continue in a devolved sense.

What was the consensus on the EU referendum in Northern Ireland?

Sinn Fein were pro-staying in Europe and the DUP were against.  In fact, the DUP’s decision to support leaving the EU may have lost them some votes as, according to the Guardian, ‘it sent yet another message of disrespect to nationalists north and south’ (Guardian, 5.3.17).  The Guardian also points out that the DUP stance on Europe was out of line with Northern Irish sentiment.

What was the final count on votes in the elections just gone?

There are 90 seats in the Assembly.  Of those, 28 went to the DUP; 27 to Sinn Fein; the SDLP (Social Democratic and Labour party) took 12; Ulster Unionists fell to 10; cross-community Alliance Party 8; Green party 2; hardline Traditional Unionist Voice 1 and leftwing People Before Profit also 1 (Guardian, 4.3.17).

Martin O’Muilleoir, a senior Sinn Fein figure who was finance minster in the outgoing executive: ‘the rise in nationalist turnout as a rejection not just of the DUP’s stance on the public spending scandal but of the Tory Brexit agenda’ (FT, 3.3.17).

‘Let us move forward with hope … that a functioning assembly can be restored and hope that a Northern Ireland with so many overlapping cultural identities can be home to all of us’.  Mrs Foster said this, having regained her constituency late last night, Friday.

Gerry Adams, Sinn Fein leader in the Republic of Ireland, describe the success of his party in the Northern Irish elections as a ‘watershed moment’ (Guardian, 4.3.17).

BBC coverage of this week’s elections in Northern Ireland:

Names to look at:

Featured Image of Michelle O’Neill, Sinn Fein leader for Northern Ireland (on the left) and Arlene Foster, DUP leader, (on the right) :

Northern Ireland Politics: The Importance of a Strong Assembly and Unionist/Nationalist Accord - Make Me AwareMake Me Aware Reply