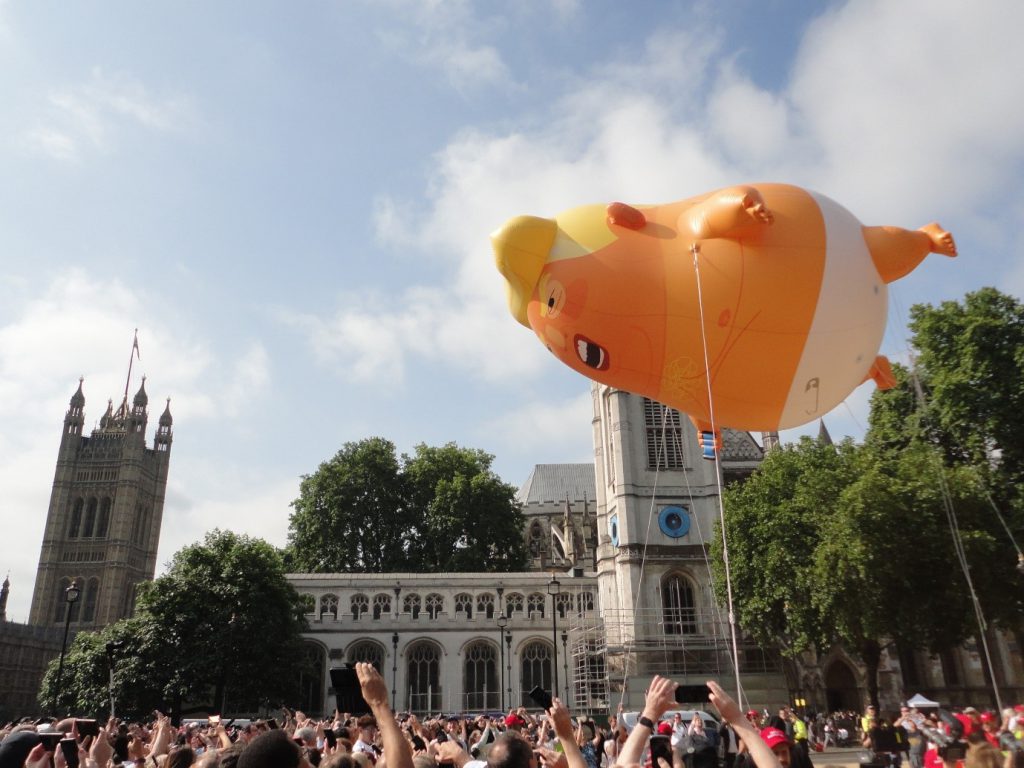 Freelance journalist and political correspondent, Lewis Baston, attended the inflation of the #TrumpBaby balloon at Parliament Square, Westminster, this morning, 13.07.18, along with Make Me Aware founder Samantha Sharp and the rest of the world’s press. The Trump Baby balloon protest was organised by activist Leo Murray and given the green light by London Mayor, Sadiq Khan.

Trump says he feels unwelcome in London. Good. He isn’t welcome. When London was under attack by terrorists last year at London Bridge, his response was to take to Twitter to spread inaccurate reporting from a right-wing website and then to use the attack for his advantage in domestic political debates and attack London’s Mayor Sadiq Khan.  He returned to making gratuitous remarks about Khan in his startlingly ungrateful and offensive interview with the Sun. Something about Khan obviously attracts his particular hostility. Hmm, wonder what that might be?

Most people in Britain dislike him (77 per cent have unfavourable attitudes to Trump, 17 per cent favourable) and Londoners are particularly hostile (85 per cent unfavourable, 13 per cent favourable). He’s understood that at least, so given how feeble his grasp on international issues seems to be, protests in London have achieved something that few other attempts to educate the man have managed. Robust protest over offensive visitors is nothing new in London’s history. In 1850, for instance, there was an international incident when a brutal Austrian general was pelted with rubbish and chased out of Southwark by a crowd who knew of his atrocities in putting down the 1849 Hungarian uprising. 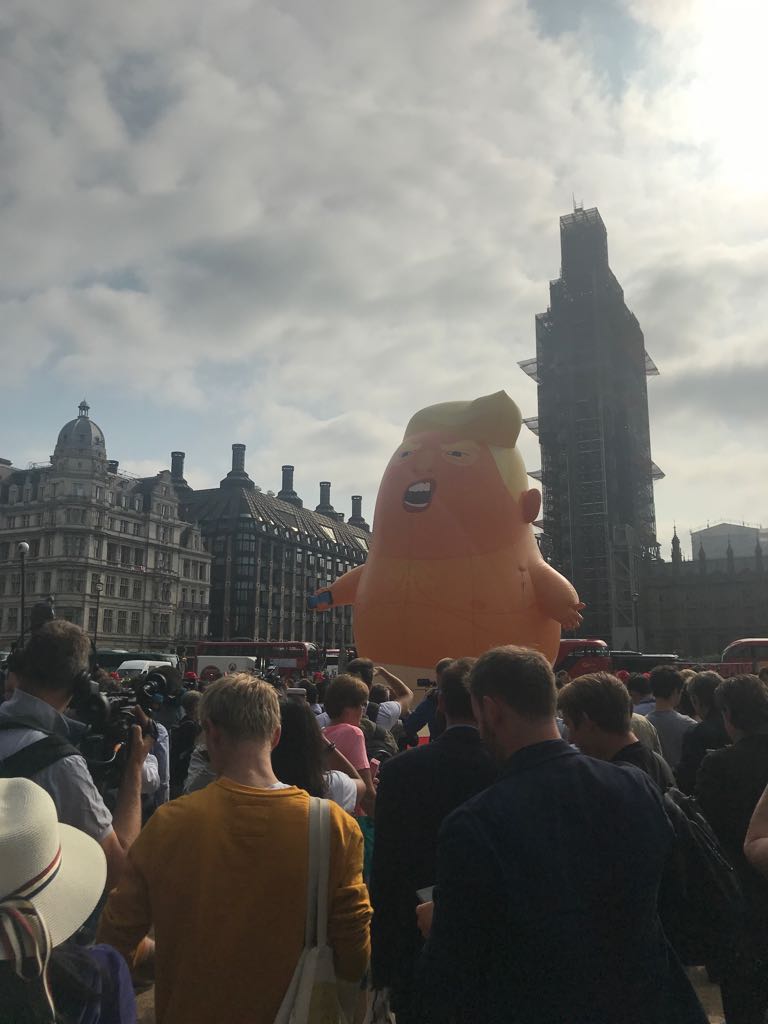 As satire, the Trump Baby is mild. It depicts him as a frustrated infant throwing a tantrum, not as a monster – which would be a possible avenue of attack given recent coverage of immigration detention camps and family separation, and Trump’s long past record. The balloon is a transparently ridiculous thing. The launch of the Trump Baby this morning in Parliament Square was good humoured fun, with genial police officers standing around with little to do and tourists on open-top buses laughing and taking pictures. A Trump fan turned up and argued with some people on the protest and his right to free speech was respected. The protest used the energy of laughter and ridicule rather than anger and violence, even though anger is a justifiable response.

The organisers of the Trump Baby protest had worked with the police and London City Hall to ensure that the launch of the balloon was done safely for the people attending and also didn’t cause disruption to traffic or airspace or pose a security threat to Parliament and the other government buildings in the area. The right to peaceful protest is one of the core features of democracy, and some people who have expressed dislike for the balloon have ended up making arguments that would violate that right. Defenders of Trump are keen to portray themselves as free speech advocates and often call people who find racist or sexist language offensive ‘snowflakes’ (i.e. that they are too delicate), but they seem reluctant to allow people they don’t like that same freedom to make ‘offensive’ arguments. It would be a very bad precedent to ban a protest on the grounds that a politician doesn’t like what the people protesting want to say, rather than for instance that a protest encourages violence or hate. 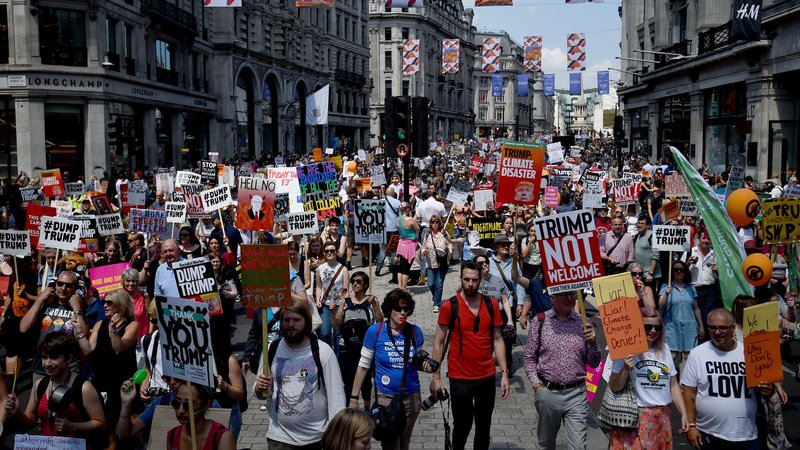 London: Thousands protest US President Trump’s visit to the UK

Objections to the balloon on the grounds of taste cannot be dismissed as easily – it is a bit tacky, one has to concede. But are we really saying a balloon – which does nothing more than put into rubber and helium the sort of image that cartoonists draw every day – is out of bounds in a public protest? Effective peaceful protests involve satire, humour and simplification to make their point. The problem with that line of criticism is that Trump himself is the epitome of vulgarity and bad taste. Remember, this is the man who talked about a female journalist as having ‘blood coming out of her wherever’ and boasted that he would ‘grab them by the pussy’.  He does not respect the office of President enough to moderate his own behaviour and language. A man who uses sexist and racial references and has derogatory nicknames for political allies and enemies alike (except, notably, there doesn’t seem to be one for Vladimir Putin) has already forfeited any right to ask for restraint or respect himself.

Poor Theresa May has learned, as have many before her, that trying to pander to his monstrous ego gets you nowhere. Out of impulse, or calculated malevolence, he will do the dirty on you. Nothing good can be expected from this individual. One might as well protest and keep one’s integrity. I went to the launch of the Trump balloon and my sense of dignity is fine. How many who bowed and scraped to this man last night at Blenheim Palace can say the same?

“Down with the Austrian Butcher!” – The international incident that happened at Bankside