Polish Politics: A clash of values as Poland’s leading political party seeks to gain control over the Judiciary

Home / Articles / Polish Politics: A clash of values as Poland’s leading political party seeks to gain control over the Judiciary 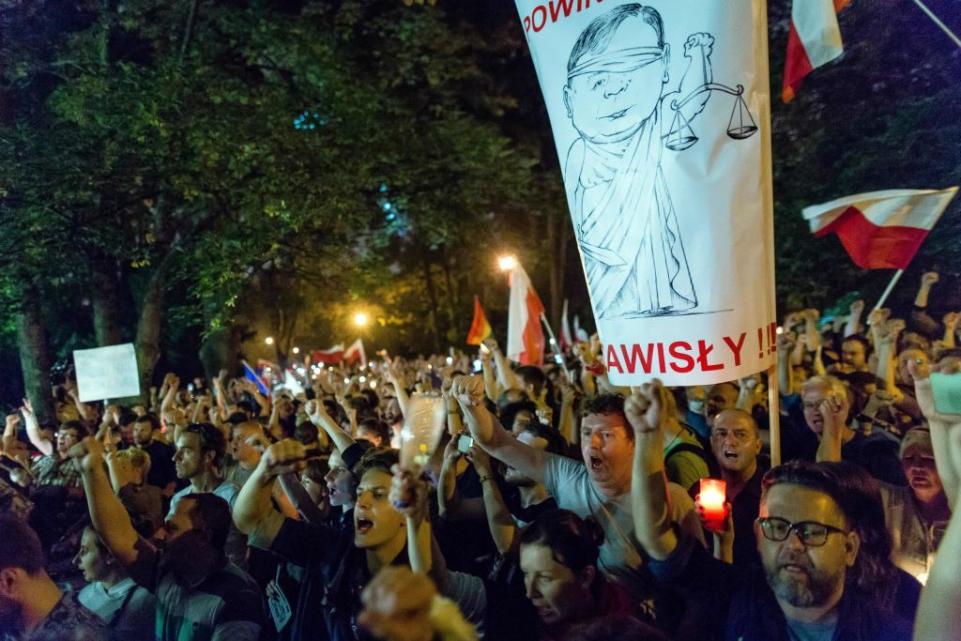 Polish Politics: A clash of values as Poland’s leading political party seeks to gain control over the Judiciary

‘I have decided that I will send back to Sejm (lower house of parliament), which means I will veto the bill, on the Supreme Court, as well as the one about the National Council of the Judiciary’.

President Duda responds yesterday to the recent street protests in Poland after the government tried to reduce the powers of the judiciary, Reuters, 24.7.17

The ruling PiS party in Poland have proposed legislation to constrain the powers of the judiciary.  We’re not talking Venezuela here where Maduro justified stripping Congress of their legislative powers back in March (https://www.theguardian.com/world/2017/jul/25/venezuela-elections-all-you-need-to-know): this is an EU member state; you know, diplomacy, yes?  The proposed reforms were passed in parliament on Thursday last week by the lower house, the Sejm, and by the upper house, the Senate, early on Saturday.  The vote was was 55-23 with two abstentions.

The bill proposed by the PiS needed the signature of President Andrzej Duda to become binding and he had 21 days to sign it into law but but yesterday, he vetoed two out of three of the proposals because they undermined the independence of the judiciary.  Thank goodness someone is looking out for the rule of law.

Kaczynski (the PiS leader) is annoyed.  According to the FT he ‘values loyalty above all else’ and it was he who backed Duda for President.  Der Freitas said that Duda’s newfound courage ‘may be to some extent the result of Trump’s visit to Poland, which is considered as a great achievement of Duda’s team. The Trump administration has criticized the package of three reforms of the judiciary’.  Kaczynski’s excuse for proposing the changes in the law is that the judicial system is slow.

Furthermore, the legislation was approved by parliament without even being presented to the President first: the usual procedure.  Before parliament passed the Supreme Court law, it said that it would agree to Duda’s requests for a compromise but so far, the amendments they have proposed haven’t met with all of Duda’s demands (Politico EU, 25.7.17).

What are the proposed bills?

In the past two weeks, the 3 bills have been pushed through parliament by PiS are as follows:

The third bill was signed by the President earlier on today but not the other two; even the third is considered controversial in Brussels.  According to Politico EU: ‘Apart from giving the Justice Minister the ability to select heads of local courts, the bill will also, in some cases, allow the heads of court to assign cases to judges of their choice’.

So far, Duda has rejected a meeting on the crisis with European Council President, Donald Tusk (BBC).

How is a law passed in Poland?

For the law to be passed it needs to have a three fifths majority in parliament: that’s 276 votes in the 460 seat chamber; the ‘Sejm’.  If the PiS can gain the support they need from some of the other parties, they can override the President’s veto.  Under normal circumstances, all laws require approval from the President.

What has been the response in Poland and beyond?

So far, Poland has seen 8 days of protests.  The EU have objected and so have the US, who are in other respects, strong allies of Poland.  According to Nasdaq, the US issued the following statement:

‘We urge all sides to ensure that any judicial reform does not violate Poland’s constitution or international legal obligations and respects the principles of judicial independence and separation of powers’.

Poland has already been ‘told off’ once

The EU commission launched a separate procedure on the rule of law last year when Poland put in place controversial reforms on the constitutional court at that time.  According to Foreign Affairs, the EU warned the PiS on 27 July 2016 when they attempted to fill the constitutional tribunal, the top court in Poland, with judges of their own choice and sack others, including the head judge.  The PiS laughed off the warning.

The EU have now threatened to start a process that can lead to a member country losing its right to vote in the European Council if the reforms go ahead (Politico, 25.7.17).  This procedure comes under Article 7 of the Lisbon Treaty.  Viktor Orban, Hungarian Prime Minster, is standing by the PiS party and has said that he will veto any attempt to sanction Poland in this way (EU Observer, 24.7.17).

Article 7 of the Lisbon Treaty

The EU’s Article 7 stipulates that the European Commission can warn member states to change policy directions when these obstruct the so-called rule of law.  If no action is taken by the member states, the European Commission can propose removing certain rights, as a way of sanction, until the country is no longer seen as in breach of the EU’s common values. This could ultimately mean that Poland will lose its voting rights at European summits, though that would need a consensus decision between all European countries (CNBC, 24.7.17).

Frans Timmermans, EU Commission Vice President, has said that the EU is close to issuing a formal warning against Poland and have threatened to impose sanctions unless the reforms are scrapped.

Duda: ‘Poland absolutely needs judiciary reform and I support it.  But Poland needs a wise reform which will ensure the good functioning of the justice system’.

Other useful bits about Poland and Polish politics

President: Andrzej Duda (45).  He studied law in Krakow and his parents were professors.  He is a former member of PiS but the role of the president is one  that is non-partisan so he can no longer be affiliated with any political party.  He is presently serving his first term.  During Duda’s election campaign in 2015, he was backed by the PiS and was nominated by Law and Justice leader Jaroslav Kaczynski (68) for President.  His campaign was managed by now Prime Minister Beata Szydlo.  She was rewarded with the prime minister’s job after the landslide election win in October 2015.

Prime Minister: Beata Szydlo (54).  The Economist do not have much faith in her ability to make her own decisions:

The ruling party and its leader: The Law and Justice Party (PiS), the leader of which is Jaroslav Kaczynski, came to power vowing to challenge the ‘liberal elite’ and champion ordinary Poles (Bloomberg 24.7.17).

According to the FT, Kaczynski is considered to be Poland’s most powerful politician.  Over time, he has been trying to change the media, the judiciary and the education system, all of which will have an overall effect on the economy and could affect future investments.  The currency was temporarily put at risk whilst the reforms were under attack but now that the President has refused to pass them, this currency has again risen against the euro (FT, 24.7.17).

The zloty: this is the Polish currency.  Poland is part of the EU but not part of the eurozone.

The parliament is bi-cameral and consists of a 460-member lower house (Sejm) and a 100-member Senate (Senat).  The Sejm is elected under proportional representation according to the d’Hondt method, a method similar to that used in many parliamentary political systems.  The Senat, on the other hand, is elected under the First-past-the-post voting method, with one senator being returned from each of the 100 constituencies.

Poland joined the EU in 2004.  It is also part of  the Visegrad Group, the ‘V4’.  This is a group of four countries that joined together to further their interests within Europe and to further strengthen the stability and cooperation between all four countries.  The V4 countries joined Europe at the same time in 2004.  Its members are the Czech Republic, Hungary, Poland and Slovakia.  It was established in 1991, shortly after the fall of communism.

Nasdaq gives a brief and easy to understand overview of the protests, 21.7.17.  Note this article written before the President vetoed 2  of the proposals:

The Economist, 25.7.17, ‘How Poland’s government is weakening democracy’:

Wawrzyniec Smoczynski, ‘Polityka Insight’, think tank in Warsaw.  It is available in English (but you have to pay for a subscription):

Further information on the V4, of which Poland is a member:  http://www.visegradgroup.eu/about

Protesters hold candles and shout slogans as they take part in a demonstration in front of the Polish Parliament as Polish Senators decide about new bill changing the judiciary system, in Warsaw, on July 21, 2017, Getty Images.  Featured in Newsweek.