Prorogation and the Queen’s Speech: how will these affect No Deal Brexit?

Home / Articles / Prorogation and the Queen’s Speech: how will these affect No Deal Brexit?

Prorogation and the Queen’s Speech: how will these affect No Deal Brexit?

August 27th 2019, saw over one hundred and sixty MP’s meet in a symbolic gathering to sign the Church House Declaration. The declaration stated that shutting down parliament would be “an undemocratic outrage at such a crucial moment for our country, and a historic constitutional crisis…Any attempt to prevent parliament [from] sitting, to force through a no-deal Brexit, will be met by strong and widespread democratic resistance.” (Guardian, 27.08.19).

The critics of the controversial move – known as prorogation – have said that it would “stop MPs being able to play their democratic part in the Brexit process” (BBC, 28.08.19)

It is well-known that Prime Minister Boris Johnson has been floating the idea of suspending parliament in order to force through a No Deal Brexit. Johnson’s campaign for PM was built on a ‘do or die’ attitude to leaving the EU on October 31st.

The morning of August 28th has seen Johnson’s government request permission from the Queen to prorogue Parliament just days after MP’s return to work in September. 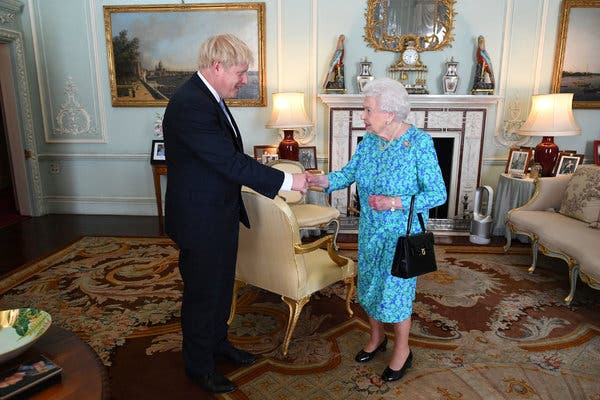 ‘Prorogued’ means to discontinue a session (of parliament or other legislative assembly) without dissolving it.

Parliament is normally prorogued for a short period before a new session begins. It is done by the Queen, on the advice of the prime minister.

“When Parliament is prorogued, no debates and votes are held – and most laws that haven’t completed their passage through Parliament die a death. This is different to “dissolving” Parliament – where all MPs give up their seats to campaign in a general election.” (BBC, 28.08.19)

This Queen’s Speech is quite different to the annual broadcast the monarch makes each Christmas. The MPs Guide to Procedure found on the UK parliament website describes the Queen’s Speech as:

“the centrepiece of the State Opening of Parliament: the official start of the new session. It normally takes place in May, but this can vary, particularly in a year when a general election is held.”

Parliamentary sessions normally last a year, but the current one has been going on for more than two years – ever since the June 2017 election.

Beth Rigby, Sky News journalist, tweeted earlier that ‘Govt will argue that this has been the longest parliamentary session since the English Civil War (1642-51) & this is about getting on with Johnson’s domestic programme. MP’s will see this as a direct challenge to your representative democracy.’ 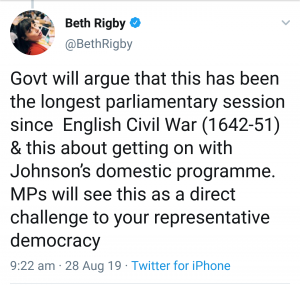 “The speech itself is written by the Government and is delivered by the Queen in the Chamber of the House of Lords. Its main function is to announce the Government’s priorities and to list the bills that they plan to introduce in the coming session.

MPs are summoned to the Lords Chamber by Black Rod (a Lords official) to watch the Queen deliver her speech.

When the ceremony is complete, MPs return to the Commons Chamber and begin debating the contents of the speech. The debate usually takes place over six days, with each day being assigned to a policy area, such as ‘the economy’ or ‘home affairs’.”

Previously, a vote on the substance of the Queen’s Speech was the moral equivalent of a Confidence Vote, but it seems pretty unlikely that Johnson and his government would adhere to that tradition.

What does this mean in terms of MPs’ time to block No Deal?

Parliament is currently in recess until September 3rd. They will sit from September 3rd-11/12th and then prorogue until October 14th unless decided otherwise.

‘To be clear about what PM is *not* doing: he is not suspending parliament to force a no-deal Brexit – it will be sitting on 31 Oct’

‘PM is *not* preventing anti-no-dealers from trying to legislate: they can do that next week’

‘Might be possible for Commons to legislate to reverse prorogation?’

‘Seems Johnson is trying to restrict anti-no-dealers scope & time, which might provoke confrontation, either next week or after 14 Oct’. 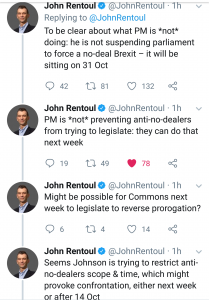 Timeline to stop No Deal

(October 2 – Conference Recess would mean that Parliament should have returned to sit today. Prorogation means that parliament will not return for another 12 days)

(Usually Parliament would debate the legislation set out in the Queen’s Speech, approximately five days. If this procedure is followed it would mean losing more time, however it may be possible to overturn the government’s timetabling motions.)

October 31 – Britain to leave EU with No Deal

Can the Queen stop the suspension of Parliament?

Parliament can only be prorogued with the Queen’s permission and on the advice of the Privy Council. Although the Queen can decide against this, she is unlikely to do so. As Head of State the Queen has to remain strictly neutral with respect to political matters and has long maintained strong relationships with her prime ministers, who she meets weekly at Buckingham Palace. Going against a UK prime minister would trigger a constitutional crisis.

As of Wednesday afternoon, the Privy Council has met and the Queen has approved the suspension of parliament.

MPs pledge to form alternative parliament in case of prorogation

What is Privy Council’s role amid plan to suspend Parliament?