One wore a suit and a red tie.  He attended the President’s inauguration ceremony on Friday flanked by his glamorous blonde wife, Ivanka.

The other, somewhat subdued in navy attire, is featured below, blending into a sea of pink hats.  He too usually has a glamorous blonde by his side.

One has been recruited by Trump to be his Senior Advisor; the other donated $100,000 to the Democratic Party. He and his girlfriend, Karlie Kloss (a Victoria’s Secret model), are known Democrat supporters.

So what, you ask?  So what indeed.  The brothers are none other than the Kushner brothers, also referred to as ‘Romulus and Remus’ by Helen Rumbelow in The Times (24.1.17; see below). 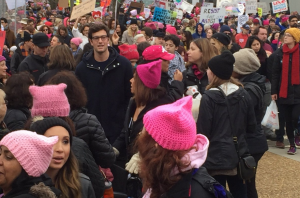 Joshua Kushner attending the Women’s March in Washington on Saturday 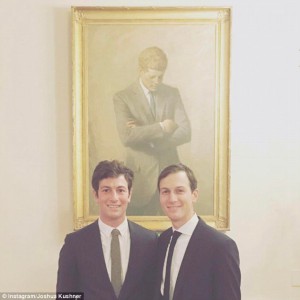