The Art and Literature: Origins of the North Star: According to Greek Mythology

Home / Articles / The Art and Literature: Origins of the North Star: According to Greek Mythology

The Art and Literature: Origins of the North Star: According to Greek Mythology

I wrote this for my 4 year old son, Oscar, to take into school as he was doing a project on the Polar Regions and so I decided to explain to him the origins of the North Star, according to Greek literature.  I had the picture commissioned by a Wimbledon based artist called Rob Anderson and it depicts, above mother and son, the asterisms ‘Big Dipper and Little Dipper’; a series of stars which form part of the greater constellations ‘Ursa Major and Ursa Minor’ (Ursa being Roman/Latin for ‘bear’).  My main influences for this were Homer’s ‘Odyssey’; Ovid’s ‘Metamorphoses’ and the work of Ted Hughes.

The Myth of Kallisto and Arcas

And the Story of the North Star 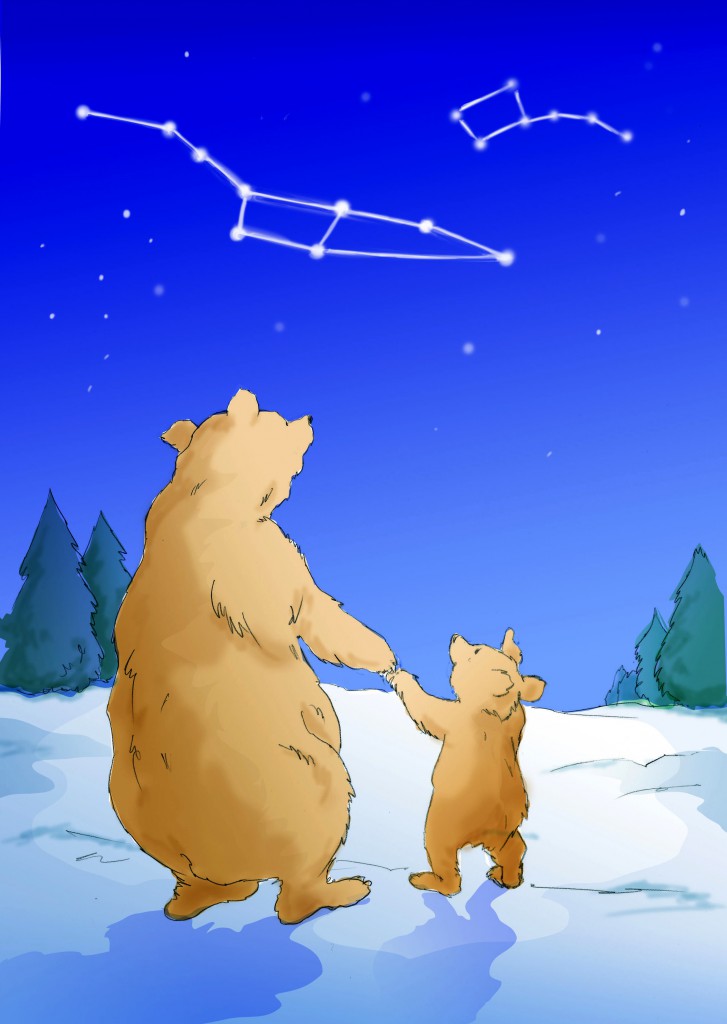 A long time ago in Ancient Greece

There were gods and goddesses, and a Golden Fleece

The story of the fleece will come another time

But for the moment, here’s another, just as fine.

There was a girl called Kallisto

Pretty as a picture, pure as a doe

Now chief of the gods was Mister Zeus

Who hung about the skies while we humans ran loose

He saw this beauty, Kallisto

(And although he was married, his wife needn’t know)

Such was her elegance, her poise, her gait.

Hera found out, (his wife you know)

She said ‘That’s enough!’ and with one fair blow

Turned poor Kallisto into a bear

For 16 years she wandered the forests alone

With Hera and Zeus atop their Grecian thrones

Meanwhile her son, a gifted hunter

Brought up by his grandfather, torn from his mother, asunder

Was out hunting in the woods one day

Looking for bears, his favoured prey

When Kallisto spied him through the trees

And ran to him, dropping to her knees.

But that the bear was his mother, he didn’t know

Her words to him were howls, not cries

He was aloof to her sorrowful sighs.

So with great skill and regal poise,

He arched his bow, this King of boys

The arrow aimed, about to fire

Than the tops of the trees and the birds’ sweet call

And upon Zeus’ ears did those tears fall

Suddenly the bow and arrow fell

And there on the ground, after Zeus’ spell

Stood little bear instead of boy

Looking at his mother with tears of joy

To her he ran and with huge embrace

Brought laughter and smiles to her age worn face.

Then once more did Zeus intervene

(Despite the protests of his Queen)

He picked them up, tail by tail

And up to the skies, they both did sail.

Arcas and Kallisto, mother and son

Round and round, how far they spun!

Now we see them from afar

The hunter now a shining star

That serves to guide people on their way

When night has followed on from day.

Beneath him there is Kallisto

Who never again, from his side will go

She points up to her wondrous son

And with that, my friends, this tale is done.

Influences and references used in the writing of the above:

Nigel Spivey’s ‘Songs from Bronze: Myths from many Lands’

[First published by Penguin books in 1958]

Myths from Many Lands, The Children’s Hour

[First published by Penguin books in 1955]

6 Comments On The Art and Literature: Origins of the North Star: According to Greek Mythology

I must say it was hard to find your page in google. You write awesome articles but you should
rank your page higher in search engines. If you don’t know 2017 seo techniues search on youtube: how
to rank a website Marcel’s way

I adore it when folks come together and share opinions, great blog,
keep it up.

Thank you for the effort, keep up the great work Great work.

Hi , I do consider this is an excellent blog.
I stumbled upon it on Yahoo , I ‘ll return once again.

Hi,
I like this story and the poem that you created to tell it. Can I point out that the picture is not accurate since the two stars on the right of the ‘big dipper’ should point towards Polaris. It is the way to find the North Star. Perhaps you can ask the artist to change it?

You are amazing this helped lots with my science astronomie project