Time: Best Photographs of the Year

Time: Best Photographs of the Year

I am working on an article of the aftermath of the Arab Spring and am going through reams and reams of notes.  A while back, in 2014, the Guardian did an article in their G2 section on the brightest young people in digital media.  I kept a note of these people as I knew they would come in useful.

Amongst those was Egyptian photographer Mosa’ab Elshamy who, at the time of the article, was 23 years old.  Born in Yemen on 10th May 1990, Elshamy grew up in Nigeria and went to college in Cairo. He was there during the protests against 30 years of authoritarian rule in Egypt: these protests started on 25th January 2011 and culminated in the overthrowing of the military ruler Mubarak (the first wave of the Revolution); the instatement of the elected and first non-military President of Egypt, Mohammed Morsi from the Muslim Brotherhood, (the second wave of the Revolution); and his eventual overthrow when the military again took over and Sisi was put in place as president, winning 96.1% of the vote (on a turn out of 47.5% of the 53 million population) after a series of elections were held in June 2014 (the third and final wave).  During these two sets of elections, incumbent prime ministers and presidents were put into place.

Elshamy’s image of two Morsi supporters carrying the body of a man shot in the head became one of the most powerful images of the Egyptian Revolution.  His work has been featured in Time magazine, the Economist, Foreign Policy, Paris Match, the New York Times, Rolling Stone and al-Jazeera English.  In 2013, this image was named by Time magazine as one of the ten best photographs of the year.  At the time of the uprising against Mubarak in 2011, Elshamy was still a student, studying for a BA in Pharmacy.  Photography was a hobby and a passion of his that changed the course of his career.  His biography states that he has lived in various countries across the Middle East and Africa, including Sudan, Nigeria, Yemen, Ethiopia and Egypt; thereby giving his work a more personal feel.  He has been praised his very intimate and human depictions of people. 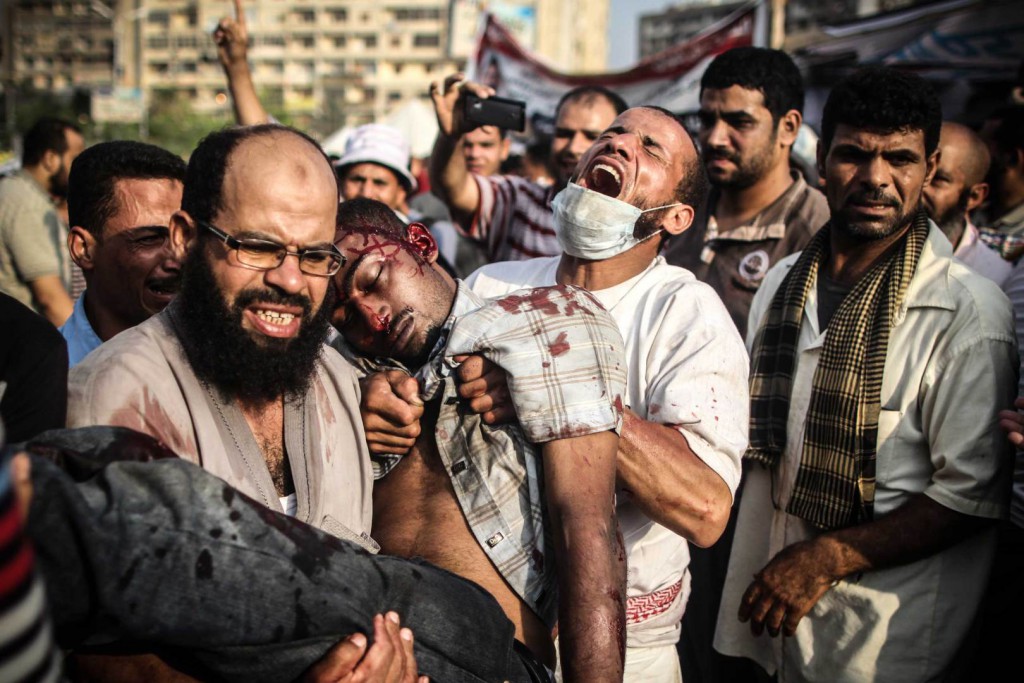 Mosa’ab Elshamy. Cairo, Egypt. July 27, 2013.
“I rushed to Rabaa Adaweya square shortly after midnight on July 27th after hearing that security forces were attacking Morsi supporters who had been camped there for two months. Throughout the night I would alternate between the front-line, the makeshift hospital and a room where dead were kept, documenting a level of brute violence and horror I hadn’t witnessed until that night. There was a constant stream of ambulances and motorbikes in the camp. The sound of sirens and panicked shouts mixed with that of live ammunition, and the air was filled with tear gas and black smoke.
Twelve hours later, I put the camera away as I got exhausted and headed back home. On my way out I heard screams and noticed a large group of people. Two men carried a dead young man who had very recently been shot in the head. The man (on the right) was in a state of shock. Unaware that the man he carried was dead, he pleaded for a medic or an ambulance and screamed for God’s mercy. I quickly got the camera out and took this photo. It was the last picture I took on that horrific day, but it remains the most memorable.”

Mosa’ab now works for the Associated Press and his current web site can be seen on the following page:-

The situation in Egypt has largely returned to what it was prior to the 2011 revolution, (in so far as there is a military president once again); although some changes have been effected.  More on this will be discussed in the article and the ramifications in the countries that surround Egypt which were also affected: namely Tunisia, Libya, Yemen, Syria and Bahrain.

A useful, if outdated, but simple timeline of events can be found on the following link:-

The above was written in August 2014 and there are some updates in the situation but it gives a brief synopsis of the events from 2011 until the time of writing on 4th August 2014.

Here is the link for the best photographs of 2015:-