A Woman to Admire and Inspire 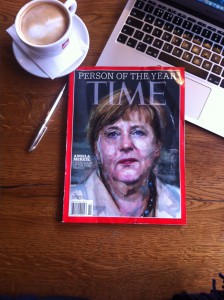 I was recently on holiday over Christmas with the kids and my husband’s family in Jamaica, where they are from. As a birthday gift, I was given a few hours on my own while my brother in law kindly took my boys down to the beach for the morning: how wonderful is this gift of time! Do not underestimate it when you are young: for all the times you might think you are enduring ‘boredom’ right now, there will come a time when time is immensely precious.

I used this time to catch up on some reading and, having picked up December’s Time Magazine from the airport, voraciously delved into an article I had been looking forward to reading, their ‘Person of the Year’ for 2015: namely that remarkable woman, Angela Merkel.

I will put the link to the full article at the bottom of this post but in the meantime, should you find yourself short of time, here are a few things I gleaned from the article that you might not have known about the woman in question:

She grew up in the GDR, the German Democratic Republic: that’s former East Germany to you and me. She moved there with her family in 1957 at the age of 3, having been born in Hamburg in the West, the former FRG, the Federal Republic of  Germany. Her father was a Protestant Minister. At that time, most people were moving in the other direction.

She was 7 when they started building the Berlin Wall; (construction began in 1961 and it came down in 1989). Merkel was 35 when the wall came down and 36 when she took office as a minister in the first government of a united Federal Republic of Germany. Her choice to join the CDU party was unusual, given that her other had won local office with the Social Democrats, a centre left party; and her father (shortly before his death in 2011), had aligned with the Green party – leftish with an environmental slant. The CDU were centre right, Catholic, culturally conservative and ‘something of a boy’s club’, according to the article in Time magazine. Merkel, at the time, was a divorced Protestant from former East Germany living with her new partner; something that didn’t align entirely with the party’s conservative values.

Then Chancellor of Germany was Helmut Kohl. He was her political mentor. When the CDU won the unified election, Kohl put Merkel in his Cabinet as Minister for Women and Youth.

She became Germany’s Chancellor in 2005; 15 years after unification.

She trained as a quantum chemist (Phd), having studied Physics at Leipzig University. She married in 1977 another scientist, Ulrich Merkel. The marriage only lasted 5 years but she kept his name, even after marrying her second and current husband, Joachim Sauer, in 1998. He is also a quantum chemist.  Here are two photographs of her published in the Time Magazine article from the 1990s: the first is an image taken by the German photographer Herlinde Koelbl in 1991 and the second a photograph of her during the 90s when she was serving as Minster of the Environment.  I like them both as they show a Merkel that is very different to the one that we see today . 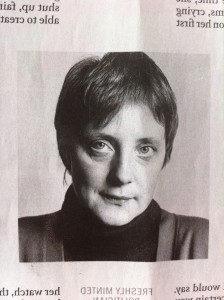 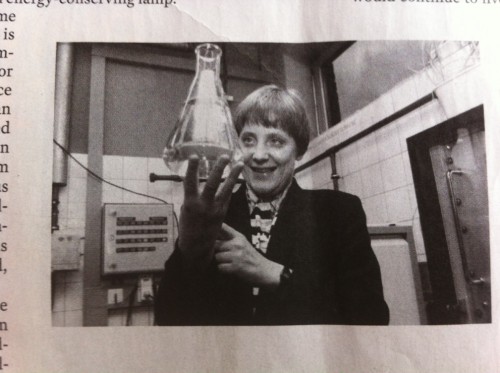 She lives modestly in an apartment in Berlin that is 100-120 square metres. This is extremely modest for a world leader. She does her own grocery shopping.

Main issues during her term in office:

Since Angela Merkel has been in office, Germany has grown steadily more prosperous, thanks in part to changes put in place by her predecessor, Gerhard Schroder: (he headed Social Democrats and was Chancellor from 1998-2005). She navigated the global recession with a sure hand and Germany overtook France as the most competitive major European economy. Merkel found trading partners outside the continent, especially in China.

In 2013 she won a third term. Her party has gained more seats with each ballot: on the last occasion, 50%.

Her desire is that: ‘Humanity, generosity and tolerance’ will work to diminish Germany’s ‘nationalist, militarist, genocidal past’. In her recent actions vis a vis immigration, she demonstrates how her country’s ‘great strength could be used to save, rather than destroy’.

Refugees were the at the centre of her New Year address in 2015:

‘Many literally escaped death. It goes without saying that we will help them and take in people who seek refuge with us’.

Many people are against her stance on taking in the migrants. The conservative German newspaper ‘Die Welt’ published a leaked intelligence report warning of the risks of assimilating so many migrants:

‘We are importing Islamic extremism, Arab anti-Semitism, national and ethnic conflicts of other people as well as a different understanding of society and law’.

Whilst her popularity may have soared on a global scale, on a national level it dropped more than 20 points as a result of this decision. The paradox here is that by opening the door to Syrians, she has unintentionally thrown into doubt the larger project of Europe. This has sparked many arguments between member states who struggle with a growing surge of migrants amidst recent concerns over terrorist attacks, some of which have had migrants’ involvement (namely the November Paris attacks and the recent January suicide bombing in Istanbul).

‘The heart and soul of Europe is tolerance’ is something that Merkel said prior to the onset of the migration crisis. ‘It has taken us centuries to understand this. We have persecuted and annihilated one another. We have laid our own country to waste … the worst period of hatred, devastation and destruction happened not even a generation ago. It was done in the name of my people’.

‘Fear has never been a good adviser, neither in our personal lives nor in our society’ she told a middle aged woman who rose from an audience on 3rd September to ask what she intended to do to prevent Islamisation, with so many Muslims entering the country. ‘Cultures and societies that are gripped by fear will without doubt not get a grip on the future’.

In 2012, the EU won the Nobel Peace Prize. At this time, Merkel was Chancellor of Germany and Germany was the most populous and prosperous member of the EU.

Merkel has given no indication whether she will seek a fourth term. This vote is not until next year and at present, there is no visible competitor on the horizon. I was recently, a week ago, at a talk at Chatham House, an international think tank in St James’s Square, London; of which I am a member. The talk was entitled: ‘Ten Crises to Watch in 2016’ and there were speakers there from the International Crisis Group, one of whom had formerly worked at the United Nations. On talking of the next contender for the leader of the UN, the possibility of it being a woman was not discounted. For my part, I don’t think that Angela Merkel would be a bad choice. 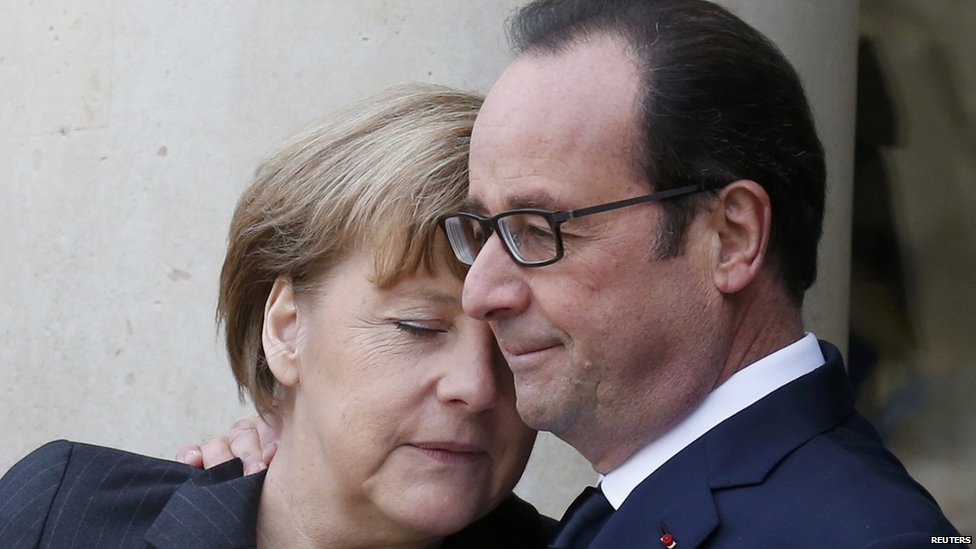 The above image is taken from Reuters.  I believe it depicts the pair in the aftermath of the Paris terrorist attacks in November 2015.

The painting on the front cover of Time magazine, as shown above, was commissioned by Time from the artist Colin Davidson, who resides and works near Belfast, Ireland.  Here is a link to his web site:

The above quotes are taken from Time Magazine’s article on Angela Merkel as their person of the year, 2015. The link for this is below:

The German photographer, Herlinde Koelbl, mentioned in the above article can be found here:

4 Comments On Time Magazine Person of the Year 2015: Angela Merkel

A well written article. Short and precise enough to keep ones attention. Interesting and. Informative!

Explainer: Some less commonly known names in German politics; past and present - Make Me AwareMake Me Aware Reply

I wanted to thank you for this fantastic read!!
I definitely appreciating every small touch of it I
have you bookmarked to have a look at new stuff you post.