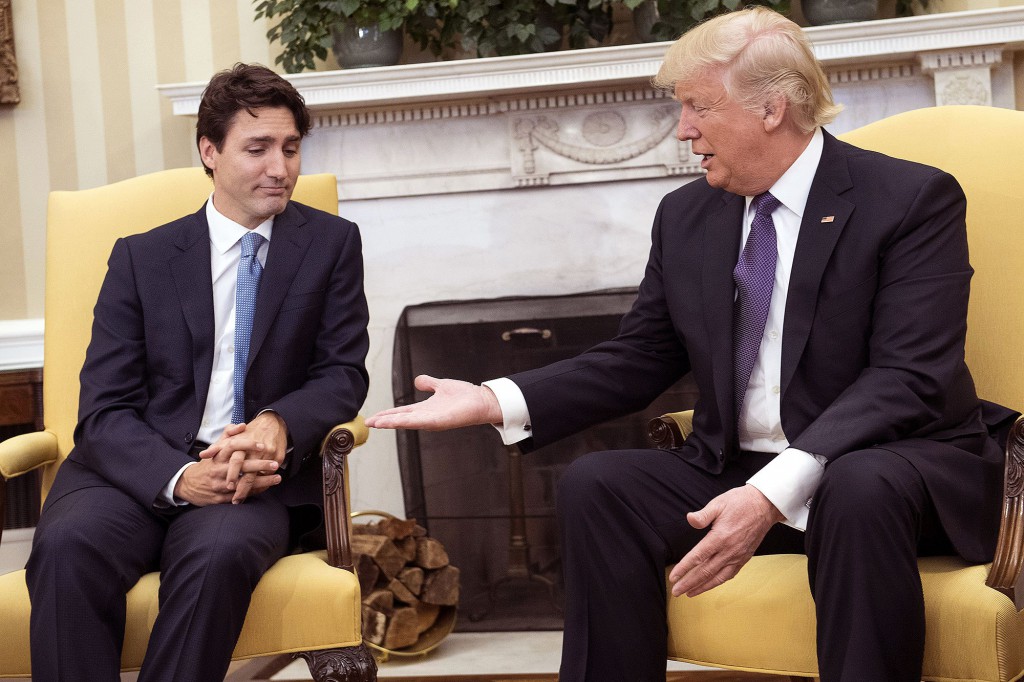 I wanted to call this article ‘Beauty and the Beast’ or Orlando Bloom welcomes the Orc (Lord of the Rings), but I felt a bit mean doing so.  I also wanted to google images of Melania standing next to President Trudeau when her husband welcomed him at the White House yesterday to see if she was looking all starry eyed but again, I didn’t.  (Ok, so I did, but I couldn’t find any).  All I could find were photographs of Melania walking through the White House Gardens with Shinzo Abe’s wife over the weekend.  Blast.

Canadian Prime Minister Justin Trudeau follows British Prime Minister Theresa May and Japanese Prime Minister Shinzo Abe by being welcomed by the White House.  Shinzo Abe arrived with his wife on Friday for the weekend and when they left, Trudeau stepped in to meet the American President for the first time since his inauguration.

Interestingly, according to the FT, (yesterday in print version, 12th February online), it is pointed out that the traditional practice is for for the incoming US President’s first meeting with the Canadian Prime Minister to be held in Ottawa, Canada.  However, Washington deemed it safer to host it in the event that Trump was greeted with massive protests on his arrival.

The two met yesterday and jointly ‘hosted a meeting of female business leaders to launch a joint effort to promote greater opportunities for women entrepreneurs’ (FT 14.2.17).  Nice move; make Trump look more female friendly to women other than his daughter Ivanka.  Did you know that half of Trudeau’s cabinet are women?  I love this man.  He speaks French so nicely too …

White House Press Conference: What was on the Agenda?

How did Trump start?

And how did Trudeau start?

He started with his usual enigmatic, gorgeous smile and the weather, saying how nice it was to visit the the balmier climes on offer in the US whilst back home they were suffering severe winter storms.  He spoke in English and French (did I mention that he speaks French already?)

And on the North American Free Trade Agreement (NAFTA)?

There were questions on this from the press, namely in that the Canadian public have concerns about their jobs and agreements currently under NAFTA which enable goods and services to cross the border.  Both leaders addressed this saying that they were well aware that each country benefited from integration.  Trump said that there would be minor tweaks in NAFTA with Canada but that the main changes would be with Mexico.

Both parties reconfirmed their mutual commitment to NATO.

Can we see the video please?

If you are short of time, you can watch an edited version of the press conference here:

A full version can be viewed here.  Trump and Trudeau have 6 minutes each to address the press. With subsequent questions, it lasts 26 minutes:

Meeting with Trump, Trudeau, Ivanka and other women: Investing in Women Entrepreneurs (10 minutes)

Be warned, the camera clicking in the background is a little off putting:

Differences between the two Leaders

Trump is 70; Trudeau 45.  Trump is on his 3rd marriage to former Slovenian model Melania (46) and has 5 children (one with Melania).  Trudeau is married to Sophie Gregoire Trudeau (41), a former TV presenter. They have 3 children together.  Melania has so far remained vocally silent in terms of her political agenda (with the exception of expressing an interest in tackling cyber bullying); Gregoire is a very vocal advocate of women’s rights.  Trump represents the Conservative ideals of the Republican Party; Trudeau is leader of the Liberal Party of Canada.  Trump has a protectionist trade agenda; Trudeau embraces free trade.  Trump has banned all Syrian immigrants from entering the US; Trudeau has welcomed over 40,000 Syrian refugees.

What present did Trump offer Trudeau on his arrival?

A photograph of Trump speaking at a podium during an award ceremony/dinner honouring Trudeau’s father with the ‘Family Man Gold Medallion award’.  (Huffington, 13.2.17).  The event took place at New York’s Waldorf Astoria on 5th November 1981.  For more information on this, see:

Here is the photograph, which Trump had put in a silver photo frame adorned with maple leaves.  Nice.  I think he’s quite good at presents: remember the big turquoise Tiffany’s box he presented to Michelle Obama on the White House steps on inauguration day? 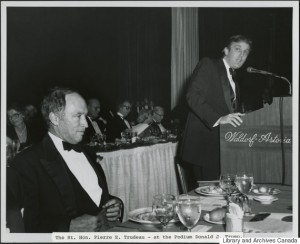 The Guardian and the Telegraph have both done articles on it: the Trump handshake. The Telegraph has opted for some verbal commentary whilst the Guardian says it all in a short video. Have a look for yourself, it’s quite funny.  I like the look on Shinzo Abe’s face after the ’19 second handshake’ that left him looking slightly befuddled.

Justin Trudeau, on the other hand, owned it, leaving Trump looking a little disempowered and lost for words.  He da man!

Incidentally, I like the twitter feed embedded in the Telegraph article of Trudeau sitting on the left and the palm of a hand on the right of the frame with the words ‘Justin (Canada)’ written on it, as a spoof prompter for Trump.

The Telegraph article also provides a nice little Reuters profile on Trudeau at the bottom.

Trudeau and Obama got on famously well.  When Trudeau was visiting the White House last March when Obama was still President, he joked that ‘Canada would welcome Americans seeking to flee the US if Trump was elected’ (USA Today, 13.2.17).

Anything on Melania while we’re at it?

Trump is a regular tweeter, although he really should post on his official White House Flotus account as there is greater security to prevent hacking; but he refuses to do so.  Melania, on the other hand, does use her’s.  The last time I checked there was very little, other than a photograph of her holding the bible for her husband to take his Presidential oath and saying that she was ‘honoured’ to serve as First Lady. There are a few more posts on there now, including a photograph of her and the Japanese First Lady on her recent visit. Looks like the office of the First Lady has started working at last.

Here is a little timeline of yesterday’s visit from Canadian newspaper, the Globe and Mail:

Library and Archives of Canada, reproduced in  the Huffington Post: