Two high profile departures in 24 hours: Could this ease the path for an exit deal?

Home / Articles / Two high profile departures in 24 hours: Could this ease the path for an exit deal? 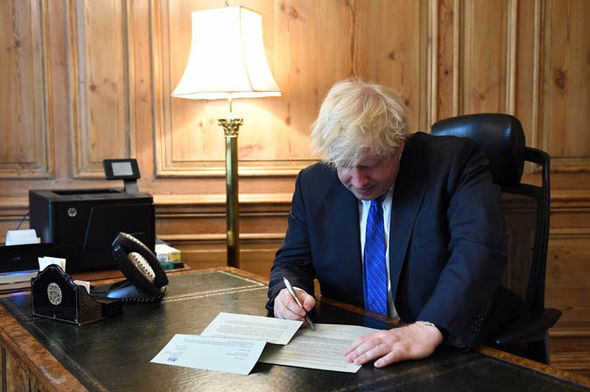 Two high profile departures in 24 hours: Could this ease the path for an exit deal?

Why did Boris resign?

According to his rather long winded resignation letter, (published on his twitter feed), Boris believed that the UK was heading for a ‘semi-Brexit’ in which the UK would have to kowtow to the EU and continue to accept EU legislation. He even went so far as to suggest that the deal would end up turning Britain into a European ‘colony’. The flowery language in his two page resignation letter and reference to ‘sending our vanguard into battle with the white flags fluttering’ was disrespectful. It seems that Mr Johnson was more concerned with rhetoric, and getting in photographers from the Daily Telegraph to take photographs of him at his writing desk, than he was about his turning up for a meeting he had arranged with European leaders to discuss the western Balkans. A total lack of respect for other people’s time. He may as well have folded his letter into a paper aeroplane and sent it flying down King Charles Street, the home of the foreign office.

David Davis’ resignation letter was more succinct, one page instead of two, and far more professional. No point scoring here or showing off in front of the cameras. In his favour, a more gentlemanly departure and no missed meetings. 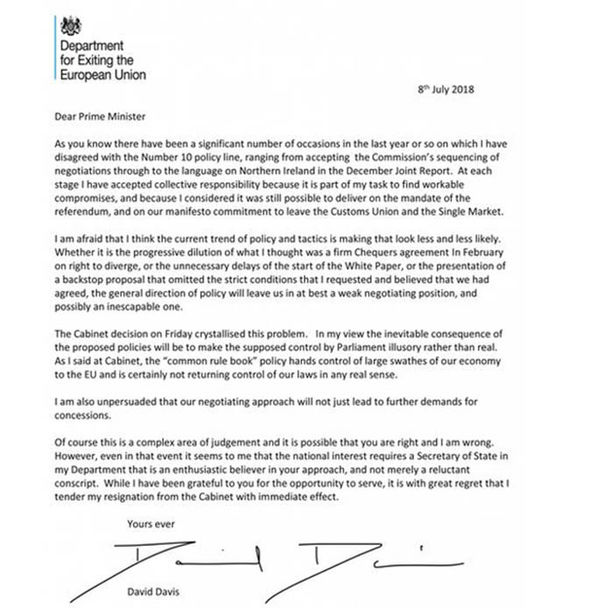 According to today’s FT, this is the ‘first time since 1982 that two cabinet ministers have departed within 24 hours, outside a reshuffle’ (FT, 9.7.18). Neither of the two were willing to make the concessions or compromises necessary to get beyond the existing stale mate with Europe.

Who are the replacements?

Dominic Raab, formerly the Conservative housing minister, will slip into Mr Davis’ shoes and Jeremy Hunt, minister for health, will take the post of foreign secretary. Raab, 44, has been pro-Brexit throughout. In 2006 he left the Foreign Office and worked as chief of staff to David Davis when Mr Davis was shadow home secretary and, at the time, ‘an established Eurosceptic’ (FT, 9.7.18). Although Jeremy Hunt, 51, is not very popular with those working in the health service, he is thorough and looks into things in detail; therefore less likely to slip up in the way that his predecessor has in the role of foreign secretary. Unlike Raab, Hunt used to be in the remain camp but now says he has converted to leave. With both sides covered, Mrs May can but hope this eases the divisions in parliament.

How are the talks going so far?

It was announced in June that Davis had only actually spent a total of four hours face to face talks with the EU Brexit negotiator, Michel Barnier, this year; astonishing when a deal is supposed to have been reached by October this year. For me, these resignations mark a productive point in the negotiations. May now appears to have adopted a softer approach, something that many of us would prefer and something that many people working in the finance sector would also prefer. To be willing to comprise should open out the possibility for negotiations on friendlier terms; it does not mean that we are ‘kowtowing’ to Europe. The decision has been taken to leave and we must simply deal with whatever is the best way forward on all counts. A soft deal is certainly better than no deal which would, again according to the FT, ‘risk an economic shock and administrative chaos’ (FT opinion, 9.7.18).

Some more hard line MPs had suggested ousting the prime minster in a vote of no confidence. In order to have the vote, 48 signatures from Conservative MPs would be needed. This is possible but it is less likely that they would succeed in getting 159 Conservative votes (a majority of their MPs) to boot her out of office and put another Conservative MP in her place. Besides, there’s no really obvious alternative. So for the time being, despite the rumours, she looks likely to remain. Her mistake, according to the FT, is that May should have challenged the hard line Brexiters early on. In my personal opinion, the issue of Brexit is something that should be discussed from a cross party perspective and May’s opaqueness throughout the negotiations has not worked in her favour. There is a wealth of experience in government across the whole political spectrum and to turn the whole negotiating procedure into a single party agenda was a bad manoeuvre. Furthermore, excluding the devolved governments of Scotland, Wales and Northern Ireland has only inflamed passions.

With only 3 months until an agreement is supposed to be reached, it would not make any sense to try to replace Ms May now. With time constraints as they are, it makes more sense to unite and focus on seeking a deal that works in the country’s best interests.