UK Politics: Gaun Yersel’ Theresa. The Prime Minister visits Scotland yesterday, the day before Holyrood vote whether or not to request an independence referendum

Home / Articles / UK Politics: Gaun Yersel’ Theresa. The Prime Minister visits Scotland yesterday, the day before Holyrood vote whether or not to request an independence referendum 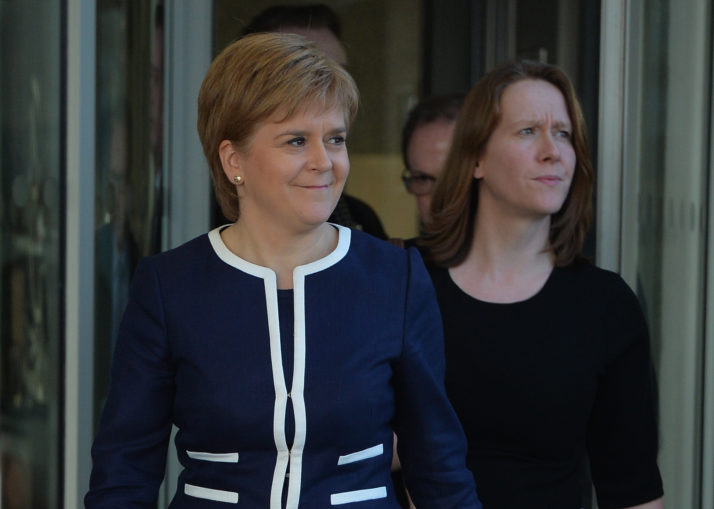 UK Politics: Gaun Yersel’ Theresa. The Prime Minister visits Scotland yesterday, the day before Holyrood vote whether or not to request an independence referendum

Theresa May has a busy week.  Yesterday she was in Glasgow for talks with Scottish First Minister Nicola Sturgeon.  Prior to that meeting, she addressed the Department for International Development whose office is based in East Kilbride in Lanarkshire.

In this short address, May promised to build a more unified Britain after Brexit.  She talked about the badge of UK Aid being one that we must all be proud of:

‘When this great union of nations, England, Scotland, Northern Ireland and Wales, sets it mind on something and works together with determination, we are an unstoppable force’.

May was referring to the work the Department for International Development have been able to carry out in helping poorer nations across the world.

May further said that she wanted to respect and strengthen the devolution settlements.  She had no desire to facilitate a breaking up of the union, which would make us weaker and pull its people apart:

‘As Britain leads the European Union and we forge a new role for ourselves in the world, the strength and stability of our Union will become even more important’.

‘As we look to that future and as we face this great national moment together, I hope you will continue to play your part in the great national effort we need to build the stronger Britain, the fairer Britain, the more outward looking Britain an the more united Britain that I am determined we should be once we emerge from this period of national change’.

May’s address was ten minutes and she didn’t hang around for questions.  Understandably so as following on from that meeting, May nipped down to Glasgow to meet police officers in Govan and discuss counter terrorism issues, particularly after last week’s terrorist attack at Westminster.

Meeting 3: The Important One

Theresa May and Nicola Sturgeon met yesterday morning for the first time since they fell out over Sturgeon’s promise to hold a second independence referendum in Scotland.  Despite her hectic morning schedule, May appeared first at around 10am with Sturgeon at her heels around 20-30 minutes later.  No cameras were allowed into the meeting but there were some photographs of the two taken prior.

What did they talk about?

Prior to the meeting, May ruled out Sturgeon’s demand for another vote between autumn 2018 and spring 2019 and accused the SNP of jeopardising the UK’s negotiations with the EU when they should be working together.  After the meeting she said that her stance on this has not changed: she said that the UK and Scotland should pull together to ensure they get the best Brexit deal and that now is not the time for Scotland to hold another referendum.

Nicola Sturgeon concurred with this: she agreed that now was not the time to hold a second referendum.  Alluding to May’s previous cat call to Sturgeon that politics were not ‘a game’; Sturgeon reiterated that this was ‘not a game’ and it most certainly wasn’t a matter of ‘outflanking each other’.  She said that according to May, the terms of the Brexit negotiations would be known within around 18 months-2 years; so by Autumn next year, there will be a much clearer picture.  It is at this juncture, Nicola Sturgeon suggested, that the Scottish electorate would be more informed of the facts and therefore in a better position to decide whether they wanted to accept those terms and remain part of the UK or reject them and go it alone.

So what will happen now?

Holyrood will be voting on the mater this afternoon where the MSPs are expected to back Sturgeon’s motion: the Green Party MSPs will, according to today’s Telegraph, join forces with the SNP to back the motion.

The vote will then trigger an official demand from the First Minister to the Prime Minister for talks in relation to a Section 30 Order: that being the Order that is invoked by Westminster, thereby giving the Scottish Parliament in Holyrood the power to cast a referendum and let the people decide.

The vote in Holyrood was scheduled to happen last week but was postponed as a result of the Westminster terror attack.

The Great Repeal Bill will be published on Thursday.  There are some reports that the Prime Minister has offered the First Minister ‘temporary powers’ under a Henry VIII clause.  The clause allows the Prime Minister to alter or amend laws by proclamation and without requiring parliamentary approval. It is so called after the Tudor monarch’s ‘Statute of Proclamations’, 1539.  This allowed King Henry to make up the laws of the land as he went along. The statute was then repealed on his death.

The Great Repeal Bill is expected to include a Henry clause allowing Number 10 to sift through the thousands of directives and regulations passed over 40 years by Brussels and accept or repeal them by proclamation. Anything important, like the single market or immigration law, will be dealt with in a parliamentary bill. For matters like food labelling, the Government will issue Executive Orders amending or importing Brussels laws into the UK statute book.

This is of particular concern for Scotland as all laws passed by the Scottish Parliament have to be in accordance with EU law; otherwise they are not laws.  Lawyers have been wondering what will happen when European law is extinguished by the Great Repeal Bill. Do EU laws all go to the UK Government since it is supplanting Brussels? Or would laws on devolved areas such as agriculture naturally go to the Scottish Parliament?

Under the 1998 Scotland Act, only reserved powers such as defence and foreign affairs are itemised and the assumption has been that anything not listed in Schedule 5 is under the remit of Holyrood.  In theory, this could give Holyrood a vast range of new powers held at Brussels.  The source for this information is provided below and I have provided further information from today’s Financial Times on the same.  I see in the latter they have gone for a Make Me Aware style of explanation with questions in bold and subsequent answers.  Nice one.

Newsweek (US) article on Scottish referendum and Brexit, 28.3.17. What would happen if Scotland did leave the UK?:

On the Great Repeal Bill and the ramifications for Scotland: