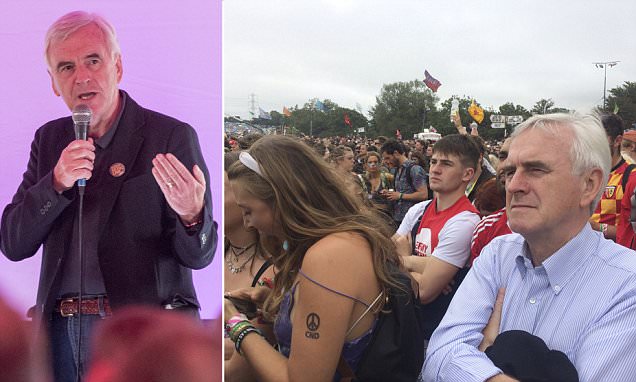 This weekend was the annual Glastonbury music festival and there were some unlikely performers.  Jeremy Corbyn was a surprise star of the show on Saturday when he introduced the US rap duo ‘Run the Jewels’.  He appeared on stage to a standing ovation (well they were already standing, fair enough) but to rapturous applause then and chants of ‘Oh Jeremy Corbyn’ to the tune of The White Stripes’ ‘Seven Nation Army’.  I admit that I had to google it and now it’s lingering around in my mind like a bad melody that won’t go away.  Said chant was de-rigeur at the festival’s ‘silent disco’ in which attendees danced to music whilst wearing headphones and all that could be heard were, again, chants lauding the Labour party leader.  I don’t think Gordon Brown ever had such street cred.  Neither did Tony Blair come to think of it.  Or Ed Miliband.  Mr Corbyn really has become the hero of the young and famous.  It has, quite simply, become cool to like Corbyn.

After introducing the rap duo and pulling a few pints, Corbyn spoke at the on the Left Field stage which hosted a debate on democracy the following day.  The debate featured Shadow Chancellor John McDonnell, Green Party co-leader Jonathan Bartley and economist and writer Fazia Shaheen.  The Bristol Post said that Glastonbury was like a labour party conference.  In said debate, McDonnell, who was invited to speak by the left leaning musician Billy Bragg, likened the Grenfell Tower fire to an act of ‘murder’ by the  Conservative party.

Yesterday on Today Programme on Radio 4, Shadow Housing Minister John Healey was interviewed and asked whether he thought the use of the word ‘murder’ was appropriate, to which he responded that McDonnell was just ‘giving voice to the anger and disbelief that many people have about how the loss of lives’.  He said that it is not a word he would have chosen to use himself.

Healey was housing minister from 2009-2010.  Grenfell may have been renovated under a Conservative government but renovations of tower blocks were also undertaken when the Labour party were in power.  The interviewer was trying to establish that this accident could have happened whichever party was at the healm.  What Healey focused on were two previous high rise tower block fires: one in Camberwell in 2009 in which there were six deaths (including 3 children, one of whom was only 20 days old and which I have written about in a previous article), and one in Southampton in 2010 in which two firefighters died.  After both fires, coroner’s reports that came out subsequently made recommendations that sprinklers should be retro-fitted to avoid the same thing happening again.  It was this that Healey blamed the Conservative government for.  At that time, the decision was made that whilst ‘sprinklers were known to be effective, it was not considered “practical or economically viable” to enforce their retrofitting in high-rise blocks’. (Guardian, 18.6.17).

You can read our contributor Jasmine Willson’s commentary on John McDonnell here:

The Guardian, 18.6.17, ‘Repeated calls for retro-fitting of sprinklers to high rises was ignored’:

The Guardian, 24.2.17, ‘Southwark Council pleads guilty after worst ever tower block fire’.  This article illustrates just how much the Grenfell Tower incident could have been avoided had appropriate safety measures been implemented then:

The Bristol Post, 23.6.17, Glastonbury and the Labour Party Conference: