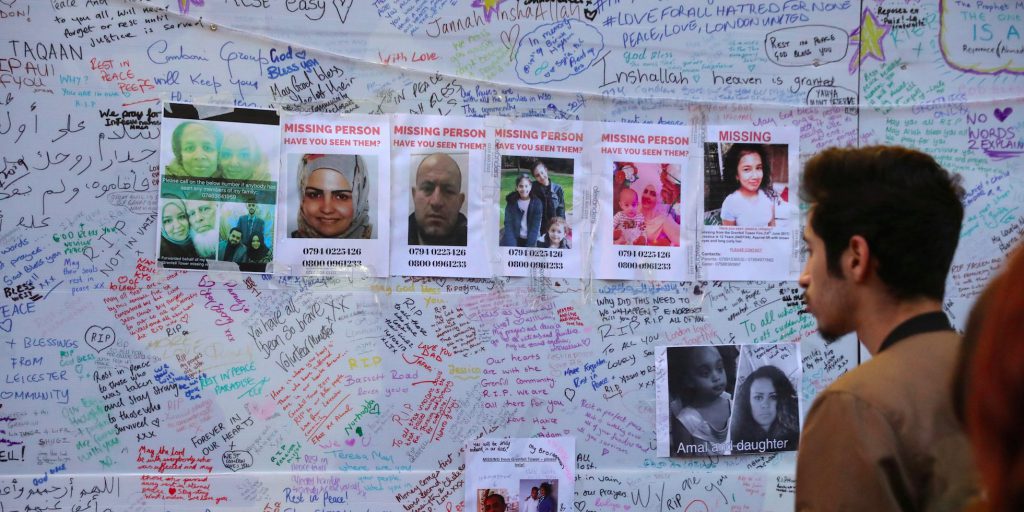 According to today’s FT, Philip Hammond has said that a criminal investigation and public inquiry will look at whether building regulations were breached during the 2016 renovations.  He also said that he ‘would only consider retrofitting sprinklers if a proper technical evaluation recommended it’.

At 11.05am this morning, the Metropolitan Police reported that there are now 79 people reported either dead or missing.

I read an article on the weekend FT that I have cited below.  In this article there are diagrams of the exterior cladding that was put up as part of the block’s near £10 million refurbishment last year.  In addition to the rapid spread of fire on the outside, something also went drastically wrong on the inside.  As you know, there was no sprinkler system installed within the building.  Since 2007, any building over 30 metres has to have sprinklers installed.  Grenfell tower was 67 metres tall.

Confirmed that the number of people dead or missing has risen to 79.  A minute’s silence was held at 11am this morning across all government buildings.  London’s Metropolitan Police have also confirmed the 5 of those who were missing and thought to be dead are safe.

The material used in the 2016 renovation cladding that covered Grenfell Tower was a material known as ‘Reynobond PE’, apparently a ‘cheaper, more flammable version of two available options’.

The Telegraph quoted Philip Hammond speaking on the BBC to Andrew Marr:  ‘My understanding is the cladding in question, this flammable cladding which is banned in Europe and the US, is also banned here’.  The cladding was sub-contracted to a firm called Harley Facades Limited, who also (according to what I read in the FT over the weekend), have now taken any reference to the Grenfell Tower off their web site.

CEP Architectural Facades produced rainscreen panels and windows for the tower during their renovations last year.  According to their managing director John Cowley, Reynobond PE is not banned in the UK and he criticised Philip Hammond for being badly informed:  ‘Current building regulations allow its use in both low-rise and high-rise structures ….. The key question now is whether the overall design of the building’s complete exterior was properly tested and subsequently signed off by the relevant authorities including the fire officer, building compliance officer and architect before commencement of the project’.

I have extracted the following comments from an article that the London Mayor Sadiq Khan wrote for The Guardian yesterday:

‘This will almost certainly be the biggest loss of life in a residential fire since the Second World War’.

‘In the postwar rush to reconstruct our country, towers went up in large numbers, most of which are still here today. Nowadays, we would not dream of building towers to the standards of the 1970s, but their inhabitants still have to live with that legacy. It may well be the defining outcome of this tragedy that the worst mistakes of the 1960s and 1970s are systematically torn down’.

‘As the mayor of London, as a Londoner and someone who grew up in a council block, I am completely committed to doing everything in my power to make sure that the causes of this tragedy are brought to light’.

Last week in his letter to Theresa May, Mr Khan pleaded that all of those affected by the fire would be rehoused locally immediately.  He further stated that there was an urgent need to ‘update the public on the process of checking other tower blocks across the country with cladding like that used in the refurbishment of Grenfell Tower’ (The Independent).

Jeremy Corbyn also wrote a letter to Theresa May in which he added his support to Sadiq Khan.  He requested that an interim report be provided to show that proper investigations are being made.  Corbyn further said that the £5 million funding offered by the government was not going to be sufficient given the scale of the disaster.  In said letter he said he awaited Ms May’s further plans and he echoed Mr Khan’s concerns that the people affected be locally and appropriately rehoused so that they could start rebuilding their lives as a matter of urgency.

Corbyn said in a television interview yesterday with ITV that the government should make use of all the empty flats in London to rehouse people, either by occupying it, purchasing the property (which could be done using a Compulsory Purchase Order) or requisitioning it:

‘In an emergency, you have to bring all assets to the table in order to deal with that crisis’ (BBC).

In the same interview he said:

‘Every day at Heathrow, planes get delayed.  Hundreds of people get stranded at airports all over the world.  Hotels are found for them immediately, they are sorted out.  Four-hundred-or-so people, still most of them have not got somewhere decent, safe or secure to stay in’.

On a personal note

A friend of mine’s daughter attends the Thomas Jones School near Ladbroke Grove in London which is close to where the fire occurred.  Three families in that school are now homeless and are being temporarily housed at the Premier Inn in Hammersmith.  She said that one of the families has a family room whilst the other two are making do in normal sized bedrooms.  They are provided with bed and breakfast which has been paid for by the council.  There are no cooking facilities.  I asked my friend whether they were provided with something to eat later in the day and she said that she did not know.  From the reading I have done, I have seen that the government are giving each family affected by the fire £5,500 from an emergency fund.  £500 of this will be given in cash immediately followed by subsequent bank transfers; again all to come from the £5 million fund.

£500 might be a lot of money but if you have lost everything, it is poor recompense.  The Royal College of Paediatrics and Child Health (RCPCH) tweeted the following in response to the Grenfell Tower disaster: ‘If, as Gandhi says, a nation’s greatness is measured by how it treats its weakest members, then Britain is failing’.

My friend and I discussed organising a concert to raise money for all of those affected and I saw in today’s Guardian that Simon Cowell has had the same idea.  He has made a record which will be released this Wednesday.  It’s a version of Simon and Garfunkel’s ‘Bridge over Troubled Water’ and Rita Ora, Stomzy (I’m so old I don’t know who ‘Stomzy’ is), Emeli Sande (I do know who she is), Celine Dion, the lead singer of Stereophonics and Robbie Williams are only some of those who have been involved.  He also got that choir guy from the TV, Gareth Malone, to help.  He is the one with the glasses who trains people to sing in choirs and then has a competition at the end of it all to see who is the best.  The Guardian says that Malone managed to organise an ensemble of 300 people, including local choirs and residents, to sing on the track.

Now if I were to arrange a concert to raise money for those who were affected by the fire, getting them on stage would be my way of finishing it.

From the FT this weekend on how the fire started.  Includes diagrams of exterior cladding and details of last year’s renovation:

Article from today’s printed FT in which it says that the Kensington and Chelsea Council have been ‘sidelined’ and someone else has been put in charge of operations to aid Grenfell survivors:

The Telegraph today.  Has one and a half minute video footage of the present interior of Grenfell Tower:

Corbyn’s letter to Theresa May, reprinted in the Metro last week:

The BBC reports on Corbyn’s interview with ITV yesterday:

The Memorial Wall by Grenfell Tower:

Difficult to be definitive at this early stage although some of the sthff coming even at this stage indicate a calous disregard of the opinions of even the people who lived there and even of the evidence advanced bgy parliament’s own fire safety committee. I hope the enquiry is not an attempt to kick it into the long grass. I think individuals, departments and committees who are found to have neglected, ignored or glossed over their designated duties are prosecuted, “pour encourager les autres”: the buck has to stop somewhere

Hello,I check your new stuff named “UK: Update on Grenfell Tower Disaster – Make Me AwareMake Me Aware” on a regular basis.Your humoristic style is awesome, keep it up! And you can look our website about تحميل مهرجانات شعبى 2017.

thank you very much