US Midterms: The Results

Home / Articles / US Midterms: The Results 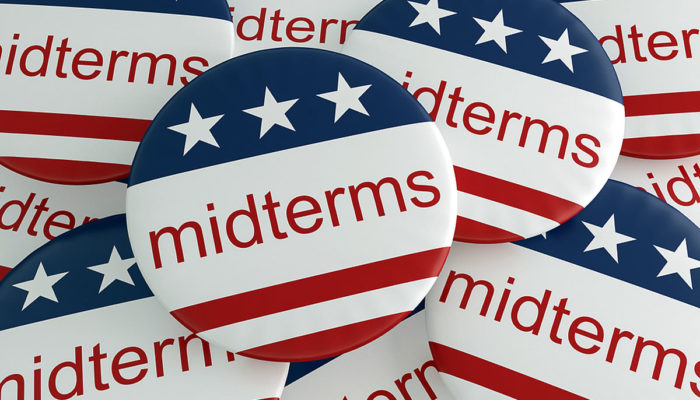 US Midterms: The Results

Are the elections over yet?

The midterm elections took place on Tuesday 6 November. The results are clear for most of the elections but there are still a few seats which are ‘uncalled’.

This means that on the basis of the votes counted so far it is not possible to be certain who has won the election because there are votes not yet counted but which might change who is in the lead. Votes still to be counted come in several categories, mostly votes received by mail but also ballots that the counting machines have trouble reading and cases of ‘provisional’ votes where the voter has to come back and prove that they are indeed legitimate voters.

Who won the House of Representatives election?

The Democratic Party won a majority in the House of Representatives.

This ends eight years of Republican control which began with the midterm elections of 2010.

According to the New York Times on 15 November the Democrats gained 39 seats from the Republicans but lost three in the other direction (including one district in Pennsylvania where boundary changes mean it is not really comparable with the result in the previous election). There are still a handful of uncalled House races, one of them a very likely Democratic gain and three more being possible Republican holds.

The Democratic gains are the largest for the party since 1974, when the Republicans were reeling from the Watergate scandal and the resignation of President Nixon.  Democrats made many of their gains in suburban districts; the core city areas are already strongly Democratic and rural and small town areas which had moved towards Trump in 2016 tended to confirm their Republican allegiance in 2018. While in the past Democratic majorities have usually contained a significant number of conservative Democrats elected from Southern seats, the majority elected in 2018 is more consistently liberal. 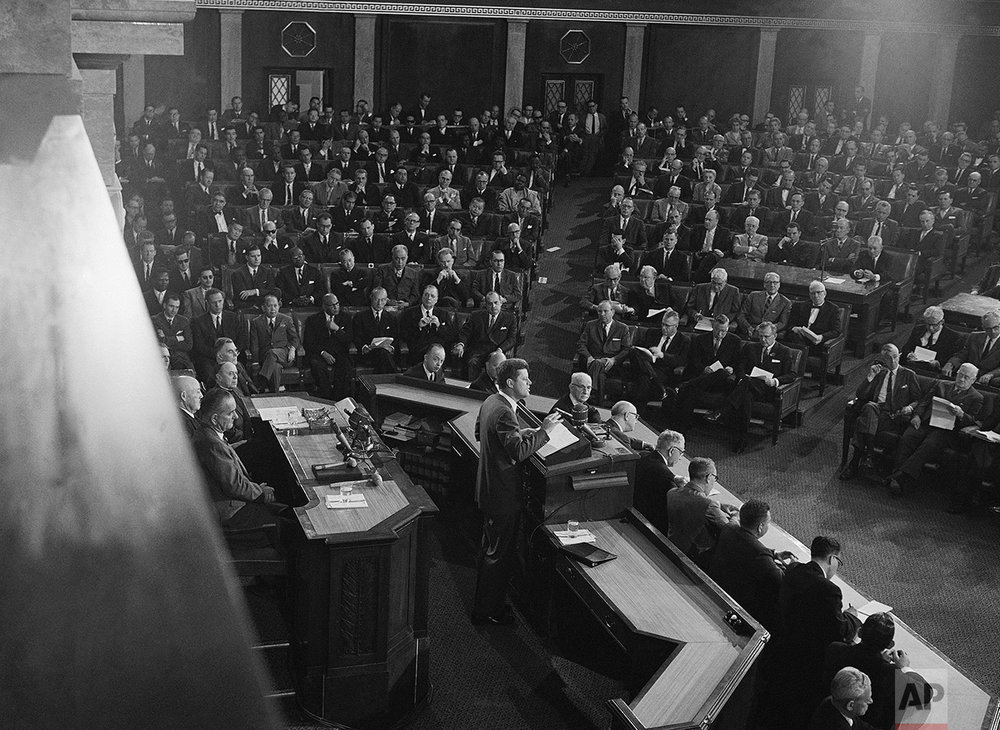 This is a partial view of the filled House of Representatives as President John F. Kennedy addresses a joint session of Congress, May 25, 1961 in Washington. Members of the diplomatic corps occupy the seats at left. At lower left, rear of Kennedy, are House Speaker Sam Rayburn and Vice President Lyndon Johnson.

Who won the Senate election?

The Republicans remain in control of the Senate and have expanded their majority.

The Senate seats that came up for election were last fought in 2012 when the Democrats performed particularly well. The Republicans gained seats in North Dakota, Missouri and Indiana – all of which voted strongly for Trump in 2016 and which were therefore difficult for incumbent Democrats to defend. However, the Democrats gained previously Republican Senate seats in Nevada and Arizona and held the ‘red states’ of Montana and West Virginia. The Republicans therefore have a confirmed net gain of 1 seat and might end up with a net gain of 2 seats.

Two results are still unresolved – there is a recount in Florida where the Republicans are slightly ahead in a previously Democratic seat, and there will be a second election in Mississippi. Under that state’s election law a candidate needs 50 per cent to win. Because nobody managed this the two front running candidates will compete in a ‘run off’ election on 27 November. The Republicans are likely to win.

Who won the elections in the various states?

The Democrats made significant gains in the elections for Governor, although they were at a low base following severe losses in 2010 and 2014. They gained in Illinois, Nevada, New Mexico and Maine, all of which were for Hillary Clinton in 2016, plus the narrowly Trump states of Wisconsin and Michigan and the normally Republican stronghold of Kansas. The Republicans gained the governorship of Alaska. Results in Florida and Georgia are still subject to recounts, although the Republicans are ahead.

The Democrats also made progress in the elections for members of the legislatures (mini-Congresses) in most states.

There were also referendums on a wide range of policy proposals in 37 states. Recreational use of marijuana was legalised in Michigan and medical use in Missouri and Utah, and several states voted for propositions like constitutional changes, abortion restrictions, Medicaid expansion or raising the minimum wage. 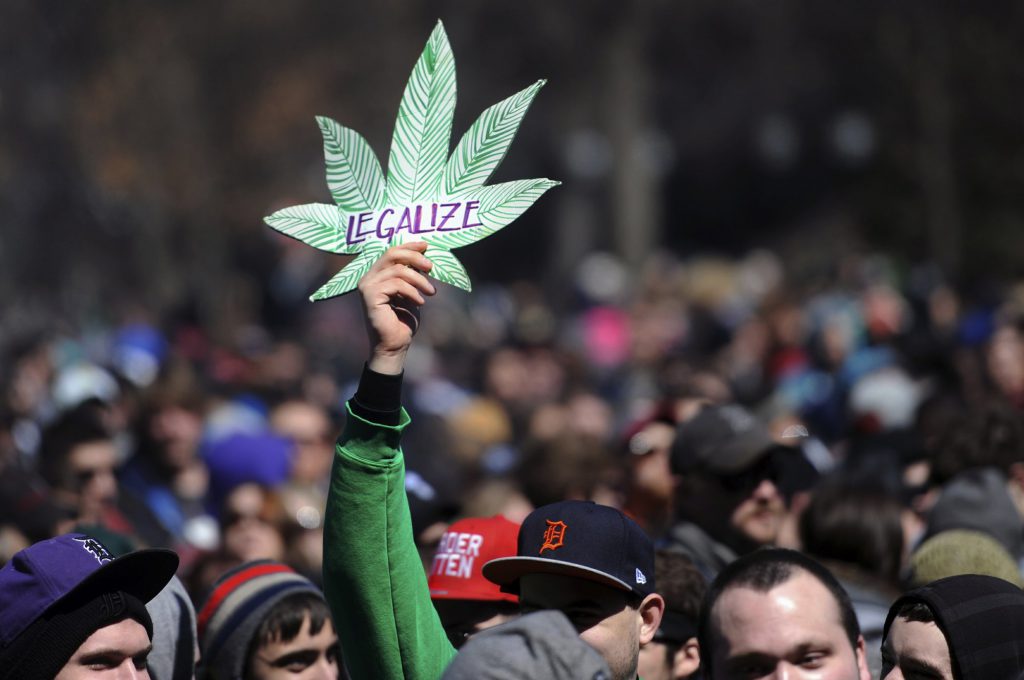 In this April 5, 2014, file photo, a man holds up a sign advocating the legalisation of marijuana at the 43rd annual Hash Bash on the University of Michigan Diag in Ann Arbor, Mich. Recreational use of marijuana was legalised in Michigan.

Why was the election reported so badly at first?

Many Americans went to bed on the night of the election thinking that the Republicans had done quite well, and on the morning after Trump claimed that his party had won a great victory:

“Received so many Congratulations from so many on our Big Victory last night, including from foreign nations (friends) that were waiting me out, and hoping, on Trade Deals. Now we can all get back to work and get things done!”  (Donald Trump 07.11.18 via Twitter).

Even some non-partisan analysts started talking about the ‘Blue Wave’ being more like a ‘Blue Trickle’.

Part of the reason was that the first results happened to come from areas where the Republicans had done better than average – Florida, Indiana and Kentucky. The areas where Democrats had done best reported their votes later, either because their voting hours were longer or because like Arizona and California they were in western time zones. This distorted the way the results were reported overnight.

Another reason for bad reporting is lack of understanding of the complexity of American electoral law and vote-counting. In some states many Democratic-voting groups (particularly young people) prefer to vote by mail quite late in the election, while Republicans turn out more in early voting and on the day (these patterns also vary between states). The first count of the votes received before and on election day showed the Republicans ahead in several districts, particularly in California, which they went on to lose. Some Republicans, including Trump, have used this pattern to make baseless claims about election fraud. Reporting such claims also contributes to bad reporting of what happened in the election. 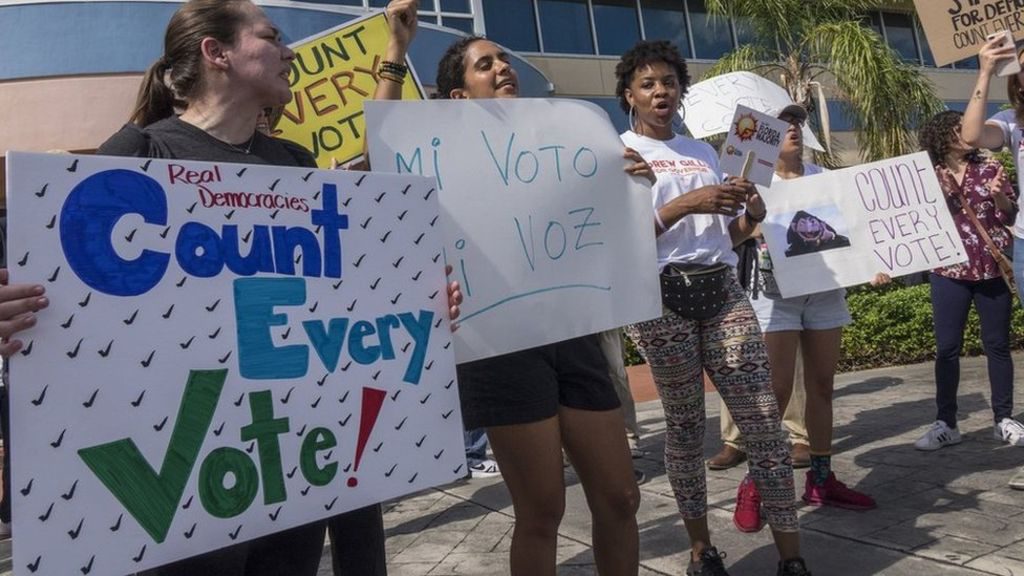 A crowd demands a vote recount in Florida where two races are too close to call.

And finally – will Donald Trump be impeached?

The House can also investigate the President and if it finds there is evidence to justify removing him from office for criminal behaviour it can vote for impeachment. If the House supports impeachment, the Senate then votes in a sort of trial and if there is a two-thirds majority there the President is forced out. The House has voted to impeach two Presidents – Andrew Johnson (1868) and Bill Clinton (1998-99) – but in both cases the process was seen as party political and the Senate did not uphold the impeachment. The House Democrats do not intend to start an impeachment process against Trump but it is certainly possible to imagine circumstances in which it might happen.

US Elections – How do they work? (Video aimed at A-Level Students)

2 Comments On US Midterms: The Results