US Politics: Was Obama spying on Trump?

Home / Articles / US Politics: Was Obama spying on Trump? 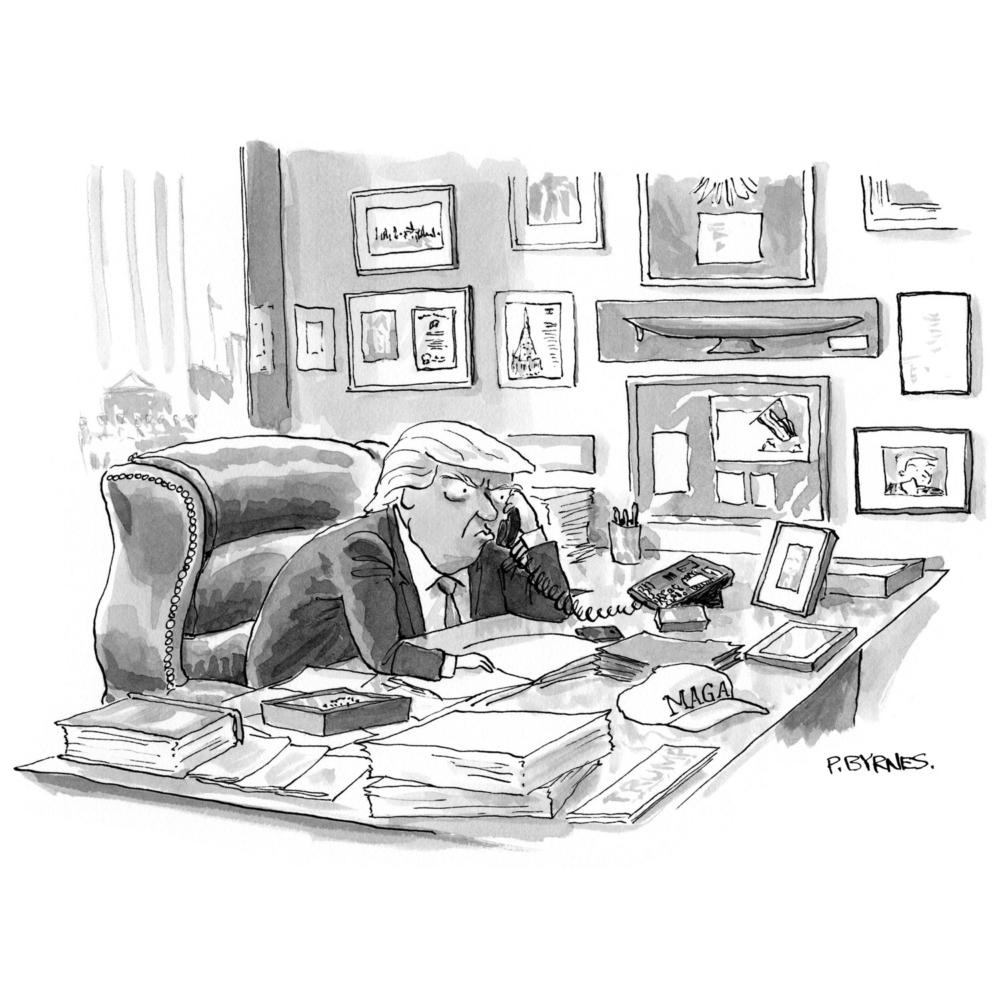 US Politics: Was Obama spying on Trump?

The caption from the above New Yorker cartoon should read as follows:

It was the New Yorker cartoon of the day on Monday 6 March 2017 and I must admit that I have become quite fond of this little cartoon feed in recent weeks.  I’ve always been a New Yorker fan, it has to be said.

In so far as Trump’s allegations against Obama are concerned, I’m not going to spend a great deal of time or research on it as it’s all over the news so you can do it yourself.  However, it’s way too tempting to let the whole thing pass without some sort of comment thereon.  Besides, I’m having a non-serious kind of day, having just made a brand new friend in the place where I do my writing; a fellow mother of a small child who is in her final year of a psychology degree.  We have been amusing each other all day with anecdotes of how hard it can be to focus and maintain self discipline and I fear I’m going to have to hide from her tomorrow, despite the fact that I am enjoying her company a great deal.  But I digress.

Here are the tweets from Donald Trump’s twitter feed that started the whole phone tapping debacle off.

Four days ago, on the morning of Saturday 4 March 2017, Trump set out on his little twitter fest for the day:

‘Terrible! Just found out that Obama had my wires tapped in Trump Tower just before my victory.  Nothing found.  This is McCarthyism!’

Then there was another one, also 4 days ago, trying to get the former President into trouble; not linked to the wire tapping allegation this one:

Okay little tell tale tit.  Anything else? Yes.  He goes on, again, the same day:

‘Is it legal for a sitting President to be wire tapping a race for president prior to an election?  Turned down by court earlier.  A new low!’

He likes his exclamation marks does Mr Trump.  Still 4 days ago; you can tell he’s enjoying himself:

‘I’d bet a good lawyer could make a great case out of the fact that President Obama was tapping my phones in October, just prior to Election!’

Whoopsie, isn’t your Attorney General in enough trouble as it is at the moment Mr President?  (See Reuters link below on AG Jeff Sessions and Guardian link also).  Jeff Sessions is presently ‘under fire for misleading Congress about his own contacts with the Russian ambassador to the US’ (FT, 6.3.17).  The Attorney General holds the position of the Chief legal counsel to the White House, in case you were wondering but didn’t want to admit it.   Remember Trump’s security advisor got fired for denying his little conversations with the Russian ambassador to the US? (See Telegraph like below).

‘How low has President Obama gone to tap my phones during the very sacred election process.  This is Nixon/Watergate.  Bad (or sick) guy!’

Do you think he sits there all day and tweets from his Oval Office desk? Or does he dictate the tweets?  Does he have a Spark Notes guide to hand covering all previous presidential scandals?  I wonder… He seems to spend a lot of time on twitter either making allegations or defending allegations.

It seems like Russia are no longer Trump’s favourite friend.  The bad mouthing of Obama continued on a different day; this time at Russia’s expense:

‘For eight years Russia ‘ran over’ President Obama, got stronger and stronger, picked off Crimea and added missiles.  Weak!’

Oh well, he’s not the flavour of the month he once was in Moscow now anyway.  This one was a day ago.

Oh how the Trump twitter feed manages to provide adequate amusement when I need to take a break or two away from the more serious issues of the day.

So how did all of this get started?  What are the papers saying?

First to my old faithful, the FT.  Trump tweeted his initial accusations following a report on the right wing/conservative Breitbart News (now a firmly established front row favourite at the White House press conferences).  Breitbart used to be run by Steve Bannon, a former banker who is now one of Trump’s senior advisors at the White House.  Actually he is ‘Chief White House Strategist’, if I’m going to get all accurate about it (FT, 6.3.17).  You’ll have heard Bannon’s name a fair bit recently on the news as Trump listens to him a lot.  The Breitbark covered allegations that were first voiced to the general public on a radio broadcast by the conservative talk show radio host, Mark Levin.  Levin claimed that ‘Mr Obama was using police state tactics to undermine the Trump presidency’ (FT, 6.3.17).

He’s denied it, of course.

The Department of Justice legally has to obtain a warrant from the foreign intelligence surveillance court before using a communications wire tap.  I have provided a link below (an FT one; no surprise there then), on how one goes about requesting a phone tap.  The President can’t just order one willy nilly. There are procedures to follow.

Do you remember when they were supposed to have tapped Angela Merkel’s phone and she was a bit miffed?  (The link for this is below if you have forgotten).

Devin Nunes, Republican chairman of the House Intelligence Committee.  Plans to evaluate the allegations as part of Russia’s alleged efforts to influence the Trump team prior to and during the election campaign.

Some requests for a special prosecutor be appointed to investigate Trump’s ties with Russia, whether personally or through members of his campaign.  Chuck Schumer, Senate minority leader, has said that he will press the deputy attorney general in waiting, Rod Rosenstein, to appoint someone.  Rosenstein’s post as deputy attorney general still has to be approved by the Senate Judiciary Committee.  Senator Richard Blumenthal, a Democrat from the Judiciary Committee, has said that he will block Rosenstein’s appointment until he promises to name a special prosecutor.

How have the Trump administration responded?

They propose an investigation: a ‘Congressional Intelligence Committee’, to be more specific, but only if Trump is able to produce some credible evidence.  Investigations could be allocated to the same cross party cohort/select committee that has been charged with investigating the link between Russian agents and the Trump campaign (you can read a bit more about these cross party select committees on my article about Michael Flynn).

Trump is already no fan of the US intelligence services and he is now siding with his right wing press buddies over the FBI.  Trump does not accept FBI director James Comey’s dismissal of his claim that Obama had tapped his phones at Trump Tower just before the elections.  The White House must now produce their source and some tangible evidence to substantiate the claim.  Until such a time, the allegations are only going to further exacerbate the already preexisting tensions between Trump and the US governmental institutions, ‘without which the country cannot function’ (FT, 6.3.17).  The Comment section at the back of the FT (one of the links below) says the following: ‘Mr Trump’s statements are the most extreme evidence that he is in more or less open conflict with all of the institutions of the US government save the military – from the intelligence services, to the state department and much of the rest of the civil service’.

So what are Trump’s sources?

The FT gives them.  Apparently the news websites Heatstreet and Breitbart said that the Obama administration, under the guise of the FBI, had ‘requested and received warrants under the Foreign Intelligence Surveillance Act (FSA) to investigate members of the Trump campaign’ (FT, 6.3.17).  This is not enough in itself; he has to prove that the Obama administration ordered the wire tapping illegally. If the warrant was issued properly and legally, Trump’s allegations are nothing more than ‘reckless slander’ and he might have to put a zip on it (the FT again).

Real Donald’s twitter feed, the one he likes to use often:

Donald’s official White House feed that he’s supposed to use (the official one is harder to hack).  The allegations against Obama DO NOT feature on this one:

FT, President advised to put up or shut up over wire tapping claims, 5.3.17:

FT straining the systems of government, 6.3.17:

Guardian report, 2.3.17, on the accusations against Jeff Sessions vis a vis contacts with Russia:

Vanity Fair article, 26.1.17, illustrating the depth of influence that Bannon has over Trump: