What does Russia want in Ukraine?

Home / Articles / What does Russia want in Ukraine? 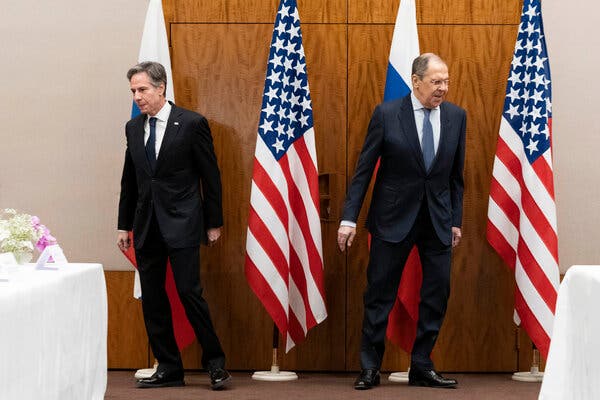 What does Russia want in Ukraine?

Russia have been amassing a large number of troops on its border with Ukraine for some time. In December, Putin sent a list of demands to President Biden asking him for assurances that NATO would not admit Ukraine as a member. Furthermore, he asked that NATO roll back its forces to 1997 borders, before it started admitting former communist Eastern European states. A further request was the removal of all US nuclear weapons from Europe. NATO presently have intermediate range missiles in Romania and Poland, too close to Russia for Putin’s liking. These can be armed with a nuclear warhead.

NATO won’t agree to any of this, although they have said that they would be willing to discuss arms control, missile deployments and confidence building measures. Despite numerous high level talks this month in Geneva (see US Secretary of State Antony Blinken and Sergei Lavrov, Russian Foreign Minister, above), Brussels and Vienna, no consensus has been reached. Writing for The Atlantic earlier this month, Anne Applebaum says the Ukrainians are ‘living in limbo’, (Atlantic, 3.1.22).

UK: Over the weekend, the UK government said they had evidence that Russia were planing to oust the present Ukrainian government and instal their own ‘puppet’ regime.

France: France are concerned the US and UK are developing positions that are explicit and alarmist and could create a self-fulfilling prophecy. Speaking at the European Parliament earlier this month, French President Emmanuel Macron called for a separate European dialogue with Russia, rather than supporting diplomatic efforts led by the US and NATO.

Germany: The head of the German Navy resigned over the weekend, saying that Putin just wanted respect and has no intention of invading Ukraine. He also said that the West should accept the Russian annexation of Crimea. There have been long term disagreements in the German government over over the Nord Stream 2 pipeline. Some approve holding back regulatory approval of NS2 in order to get Russia to roll back on its aggressive stance. The current Foreign Minister and Green party leader, Annelise Baerbock, wants to say no to NS2 permanently. SPD Defence Minister, Christine Lambrecht, doesn’t believe it should be dragged into the conflict, (Constanze Stelzenmuller, FT). The SPD Chancellor Olaf Scholz holds the key. Germany has been divided on Russia since the USSR collapsed.

Baltic States: Estonia, Latvia and Lithuania are all in NATO. All 3 were part of the former Russian Empire and, after a brief period of independence between the 2 world wars, became part of the USSR again in 1940 when Russia invaded. The Baltics stand with Ukraine and feel that if they don’t support Ukraine now, they could be Russia’s next victim. Recently, the US authorised Baltic NATO members to send US made Javelin anti-tank weapons and stinger air defence systems to Ukraine. (CNS Fordham Law, 21.1.22).

Sweden and Finland: Putin said in December that if the two traditionally neutral countries were ever to join NATO, it would have very serious military and political consequences. Sweden has been neutural since the Napoleonic wars and Finland has been neutral since signing a Friendship Treaty with the USSR in 1948. (Finland was once part of the pre-Soviet Russian Empire). Both Sweden and Finland signed up to NATO’s ‘Partnership for Peace’ in 1994. In 2016, they also signed an Agreement with NATO giving the alliance access to their territory in the event of an emergency. Russia have sent their navy to the Baltic Sea and in response, Sweden have boosted their naval patrols.

Turkey: A long standing member of NATO, President Erdogan could go either way when it comes to Russia. They recently decided to buy Russia’s S-400 air defence system, which has led to the US banning them from their F35 fighter program.

Many Western countries have already taken steps to evacuate families of diplomats based in Kiev.

Russia denies any plans to invade Ukraine. It blames the West and NATO for deploying more forces and publishing fake claims of a Russian regime-change plot. These accusations will only make talks less likely.

The Washington Post say there are stark divisions between the US and Europe when it comes to guessing what Putin’s intentions are. Some in the EU seem to think that Putin is trying to gain concessions and that a military confrontation won’t happen. Historian and military strategist, Edward Luttwak, said last week on Twitter that Putin wouldn’t start a war he couldn’t afford to fight. Russia’s military incursions into Chechnya in 1999, Georgia in 2008 and Eastern Ukraine (through proxy forces), were all limited. An invasion of Ukraine, a country roughly the size of Afghanistan that borders Europe, has weapons supplied by NATO and promises of support from NATO member states, (even without membership itself), is in a different category altogether. The US has been sending military equipment and expert assistance to Ukraine since the 1990s and last year Biden approved a further $125 million in new sales. If Russia were to invade Ukraine, its reach would expand to the borders of NATO countries Poland, Slovakia, Hungary and Romania and encroaching on member state territories are dangerous business as penetration into either one or all of them would result in a triggering of Article 5, NATO’s mutual defence clause.

Putin wants Ukraine back in Russia’s geographical and political sphere of influence; a rebuilding of its historic buffer zone. He has Belarus whose President, Alexander Lukashenko, has said that he will deploy forces at the Ukrainian border in response to NATO force deployments in the Baltics and troop build ups in Ukraine. ‘We just want to defend our southern border’, he says. (FT, 25.1.22). The southern border of Belarus lies only 50 miles from Kiev, Ukraine’s capital. In 2020, Putin backed the suppression of peaceful protests in Belarus against Lukashenko ‘winning’ another presidential term. Last year, Russia encouraged Belarus to weaponise migration on the Belarus/Poland border, putting great pressure on Poland. (Constanze Stelzenmuller, FT, 22.12.21).

In January, Putin sent in Russian troops to quash protests in Kazakhstan, earning him some political brownie points with President Toakyev. Kazakhstan is the most Russified of all the Central Asian republics, with a 20% ethnic Russian population. (Putin likes ethnic Russians in other countries as it always gives him a pretext to invade on their behalf). Kazakhstan has a Collective Security Agreement with Russia, the CSTO, which it signed in 1994. (Armenia, Kyrgyzstan and Tajikistan are also signatories).

In December, The National Interest published an article on areas where Russia could seep into Ukraine to gain a military foothold. Below is a map to help illustrate this. The second map shows where Russian military forces are presently amassed, (FT 24.1.22).

The Likelihood of a Diplomatic Resolution

Putin’s list of demands are unrealistic and he knows it. If he pulls back, it shows weakness. If NATO gives in to his demands, it shows weakness. Neither side is in a position to acquiesce to the other and recent high level talks have failed to come up with a solution. The US have threatened to unleash a tirade of economic sanctions against Russia should they invade but it may have to do something more than that. Europe relies heavily on Russia for energy supplies and Russia is no stranger to supplying energy on a conditional basis. The US have been in talks with Qatar and other large gas exporters in a precautionary boost to energy supplies should Russia slam on the breaks and stop supplies flowing, (FT 22.1.22). Russia’s extreme demands in December sent to the US could be a negotiating strategy where they strike at maximum advantage and give away none.

The Likelihood of a Military Resolution

It is unclear how Putin could achieve his political objective without committing to some sort of long term occupation, which would be a costly endeavour. He can be assured of support in the Donbas area of eastern Ukraine and has Crimea from which to pivot his forces in an amphibious (land and sea) assault. The FT’s Gideon Rachman recorded a pod cast in which he interviewed Sam Charap from the Rand Corporation. Charap sees no advantage to Russia dispatching forces too far westwards in Ukraine, beyond the dividing line of the Dnieper River. From Russia’s naval base in Sevastopol, Crimea, troops could be sent in to seize the port city of Odessa. To the west of Odessa and Ukraine lies Moldova, another country that has steered towards Russia’s orbit in recent years. Russia could make the withdrawal of their forces contingent on a change of government in Ukraine to more Russia friendly President, or on a new constitution being implemented.

The current irony is, Charlap points out, is that there are no imminent plans for Ukraine to join NATO as it doesn’t even have a Membership Action Plan (MAP). What Ukraine does have is a promise that was made to them in 2008 that they could join at some point in the future. Ukraine is however an ‘Enhanced Opportunities Partner’ of NATO.

In the 1994 Budapest Memorandum, Russia made a commitment to respect Ukraine’s territorial integrity. The Budapest Memorandum involved the relocation and/or destruction of nuclear weapons that were held in the 3 newly independent countries of Ukraine, Kazkakhstan and Belarus. The United States, being party to it, agreed to help dismantle the weapons and Russia would take what was left. At that time, Ukraine held the world’s 3rd largest stockpile of nuclear weapons. It agreed to dismantle them if the United States gave them a security guarantee. This was not forthcoming but in December 1993, a trilateral agreement was drawn up between Russia, Ukraine and the United States in which Russia agreed to formally recognise Ukraine’s newly independent sovereign boundaries. The Trilateral Agreement was signed by all 3 countries in January 1994. The Budapest Memorandum of December 1994 further entrenched this. Russia violated the Budapest Memorandum when it annexed Crimea in 2014.

At the Munich Security Conference in 2007, Putin said that the West had broken their promise not to expand NATO into former Soviet territory. There are no written agreements to prove this, although it is widely accepted that the former Secretary of State under George HW Bush, James Baker, made a verbal promise to Gorbachev that if he agreed to accept a united Germany, NATO would expand no further. Baker’s argument was that if Gorbachev didn’t agree, Russia would end up with a more embittered Berlin. East and West Germany united in October 1990 and the Warsaw Pact, the Soviet Union’s equivalent to NATO, disbanded shortly thereafter. Germany agreed they would not seek to develop their own nuclear weapons and they have kept this promise.

In 1993, then Russian President Boris Yeltsin wrote to President Clinton to say that a NATO expansion eastwards would break the sprit of the 1990 Agreement on the unification of Berlin.

Back to Present Day

Unlike the global power competition of the Cold War period, the West are now in a position where they are threatened on two fronts by a rising China and a revanchist Russia. Doing nothing in the event that Russia invades Ukraine sets a dangerous precedent for China to invade Taiwan further down the line. The United States cannot commit to a military manoeuvre without agreement from all the parties within NATO and the longer things go on as they are, the more chance there is of member states falling out, not being able to agree, and things escalating to a point of no return.

The Washington Post, ‘Is Putin Bluffing on Ukraine? Allies in the US and Europe are Divided’, 24.1.22:

UK Government issues a statement saying Putin is intent on installing a ‘puppet-regime’ in Ukraine, 22.1.22:

US in Talks with Qatar on Gas Supplies to Europe in the Event of a Ukraine Invasion’, 22.1.22:

“How Serious is Putin about launching a major Ukraine Offensive?’, 15.1.22:

Anne Applebaum for The Atlantic, ‘The US is Naive about Russia. Ukraine Can’t Afford to Be’, 3.1.22: