Home / Articles / Why does Boris Johnson want an election now? 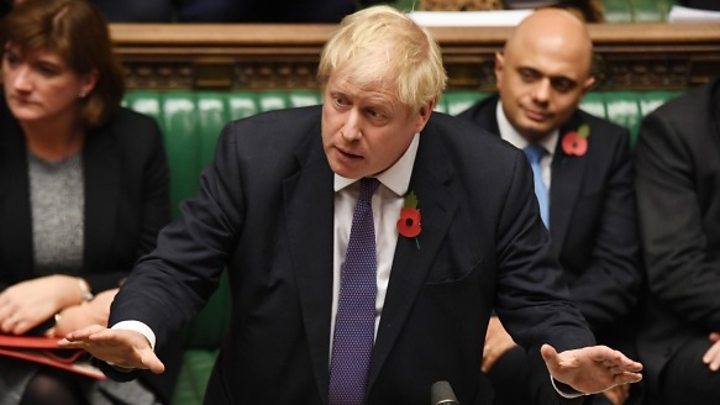 British Prime Minister Boris Johnson’s life-long ambition may have been fulfilled once the removal vans unloaded his possessions at 10 Downing Street, however the blonde has been afflicted with one bombshell after another. Whether it be suffering ten defeats in Parliament (so far), two historic court rulings going against him and accusations of the misuse of public funds after paying his alleged ‘lover’, Jennifer Acuri, one hundred and twenty-six thousand pounds for ‘technology lessons’.

On Monday evening, Johnson lost another vote in his efforts to secure a general election for 12th December.

The PM is determined to push for an election now that the EU has granted a further three-month extension for his Withdrawal Agreement Bill.

Mr Johnson was forced to write to the EU to request a delay due to MP’s passing the Benn Act on the 19th October. The Benn Act (EU Withdrawal No.2 Act) requires the government to act to stop a No-Deal Brexit on 31st October.

If the PM’s deal is passed in Parliament then the UK can leave the EU before that date.

Johnson needs an election in the hope he can restore the Conservative Party’s majority in Parliament in order to get his deal through.

The 2017 snap election resulted in a hung parliament, with the Conservative Party having won the most seats in the House of Commons with 317 Conservative MPs, but without an overall majority needed to govern (326 out of 650 seats).

The DUP, which won 10 seats in the election, suggested it would be able to provide a coalition or confidence-and-supply arrangement depending on negotiations. Downing Street announced that a final agreement between the DUP and the Conservatives would see Theresa May lead a minority Conservative government supported legislatively by the DUP.

Will Boris Johnson win an election?

Now that No Deal Brexit and the ‘do or die’ pledge to take the UK out of the EU on the 31st October have both been stopped, it is unclear how Johnson will do in the polls.

The Financial Times has created a poll tracker, which, as of Tuesday 29th October, shows the Conservatives ahead with 36 per cent and Labour at 25 per cent: 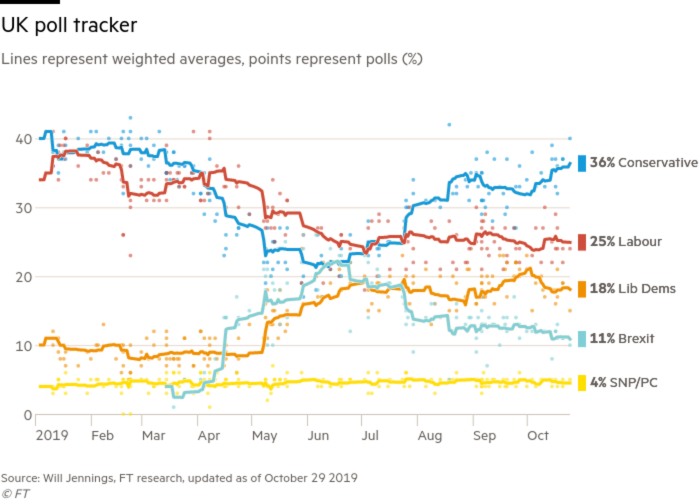 ‘The tracker shows the Tories ahead of the opposition Labour party in the polls since Boris Johnson became prime minister in July. The FT poll tracker collects all published UK voting-intention polls. The trend line it calculates uses only the most recent poll from each pollster and weights polls according to how recently they were conducted, writes Martin Stabe. According to this method, Mr Johnson’s Conservative party would go into an election campaign with an 11-point lead over Labour.’ (FT, 29.10.19)

The Financial Times will be updating the tracker daily: https://www.ft.com/brexitlive

When will an election take place?

Labour has released this statement from party leader Jeremy Corbyn:

“I have consistently said that we are ready for an election and our support is subject to no-deal Brexit being off the table.

We have now heard from the EU that the extension of article 50 to 31 January has been confirmed, so for the next three months, our condition of taking no deal off the table has now been met.

We will now launch the most ambitious and radical campaign for real change our country has ever seen.”

This is what he told the shadow cabinet this morning.

“In this statement Corbyn is not saying anything about the conditions he flagged up yesterday for Labour supporting an early election. That implies the party is not insisting on firm red lines, and that it will support the bill – meaning the early election is definitely on.”

The actual date of the election is still up in the air – Boris Johnson wants an election on 12th December, but the Liberal Democrats and SNP favour the 9th December.

Why do some parties prefer a 9 December poll?

The Lib Dems and the SNP proposed an election on Monday 9th December to ensure the government had no time to bring its Brexit deal back. They have also warned about the risk of students being disenfranchised as they may have broken up for Christmas by 12th December and it could be harder to get this cohort to vote if they are travelling between two locations.

‘The Lib Dem MP Chuka Umunna said the party was not prepared to accept the 12 December proposal. “If you have the 12th, it presents an opportunity for the government to get their withdrawal agreement bill through,” he said.

“The reason the 9th is preferable is because it would stop them from bringing forward their withdrawal bill and completing its passage through the Commons.”’ (29.10.19)

Why does the government object to 9 December?

Leader of the Commons, Jacob Rees-Mogg, said the date was not realistic as “twenty-five working days were needed between the dissolution of parliament and polling day. Parliament would have to be dissolved on Friday, while also securing royal assent for the election bill, and passing a Northern Irish budget bill, which could be very difficult.” (Guardian 29.10.19)

There may be a compromise with 10th or 11th December winning rather than 12th December. Labour may back efforts to amend the date, but the party is still likely to support the government’s election bill as a result.

Boris Johnson’s bill for a 12th December election was approved by 438 votes to 20 on Tuesday. It will now go to House of Lords for consideration – where it is unlikely to be opposed.

Serial loser: Boris Johnson and his litany of defeats

How Brexit Went So Wrong: A Crisis Of Leadership

UK election date: which party wants what, and why does it matter?